The drumbeat of it all has seemed never ending.

Ongoing police violence against Black men and women has inflamed racial tensions. A global pandemic has killed Black people in disproportionately high numbers. And these extraordinary traumas come to a community whose mental and physical health already suffer because of anti-Black sentiment.

The suffocation of George Floyd under the knee of a white police officer in Minneapolis ignited a summer of national reckoning on race. Sacramento activist Jamilia Land summed up the anguish: “How do you heal a wound that never closes?”

In the Black community, living with those open wounds comes at a heavy mental and physical cost that researchers and mental health experts continue to assess.

La Tanya Takla, a psychologist and family therapist, focused solely on her private practice in Sacramento this summer as a growing number of African Americans sought her help to cope with the stress and its impact.

“It takes a huge toll — a societal toll,” she said. “We are a group of people who have been dehumanized. We’re seen as having a different experience. We work in the same places, but experience dehumanization that is demoralizing.

“The trauma of seeing people who look like you killed every day — it’s getting to a place where people can’t ignore it anymore. The psychological and mental impact on people is something we’re just now starting to consider,” Takla added. “It’s why the movements are happening. You’ve got to do something about it.”

The effects of dealing with ingrained anti-Black sentiment can be seen in doctors’ offices and emergency rooms and felt in the community.

“Even before COVID-19, and with COVID-19 plus the George Floyd death, there are really very, very high levels of stress within minority communities,” Williams said in a July call with reporters to discuss the health challenges that communities of color face.

“And then on top of that, we are dealing with a crisis of racial inequity with police killings that have drawn attention of not just our nation but of the world, and that is another kind of traumatic life experience,” Williams said.

In a study years ago, Williams linked a database of police killings with a storehouse of information on mental health by population. It showed those deaths have lasting effects.

“We were able to document that every police killing of an unarmed Black person in America led to worse mental health, not just for the family and friends but for the entire Black population for the state in which it occurred for the next three months,” Williams said.

Images of police killings and other traumatic events viewed online also have damaging effects on Black and brown preteens and teenagers, Williams said.

He cited a September 2019 study published in the Journal of Adolescent Health linking online images to greater instances of post-traumatic stress disorder and depression in preteens and young people ages 11 to 19.

Researchers said the findings extended earlier research that police killings and viewing other distressing news and images are related to poor mental health.

Land spoke forcefully of the need for mental health services in Sacramento’s Black community in the days after Stephon Clark’s killing by Sacramento police in 2018. Two years later, Land is again on the front lines of racial justice protests — and the pandemic.

“All over the globe, people were standing up about what happened to George Floyd. COVID was an agent to give visibility to what’s happening with race relations in this country — to see what was going on with our fellow human beings,” Land said. “We saw it in its entirety. We saw and heard this man call out for his mother. The imagery and the body language of the officer told us what we’ve known for years: that your Black life means nothing. Floyd’s last words were ‘I cannot breathe.’ How many times have we heard that? But we heard that on a psychological level. We cannot breathe in our communities.”

Today, Land is a COVID-19 survivor. She spent four days in a Sacramento hospital in mid-July, critically ill with COVID-19. The same week in July, her father died after contracting the virus in his Georgia nursing home. Willie Land was 84.

Even now, Land said she feels lethargic, suffers severe headaches and says her memory is foggy.

Land believes she first contracted the virus months earlier in March after attending an event in Sacramento that she helped organize. Land, an asthmatic, said she was became ill mid-event and spent weeks on the couch with what she thought was the “worst flu I ever had” before she was sickened again in July.

If not for the nation’s longstanding history of racial inequities, would COVID-19 or police violence have been able to claim so many Black lives?

“It’s a lot and it’s an emotional overload for a lot of reasons,” said Karyn Tribble, director of the Alameda County Behavioral Health Services Agency. “For Black and brown people, what always existed — socioeconomic factors — overlay that with COVID and it makes it that much more profound.”

Tribble calls it a “pervasive concoction” — COVID-19’s derailing of the economy that has led to job insecurity and fears of eviction. African Americans also are re-traumatized daily by images of violence against — and killings of — people who look like them. Floyd. Breonna Taylor. Ahmaud Arbery. Rayshard Brooks. Jacob Blake. The list grows longer with each passing day.

Then, she said, African Americans are subjected to public debates over whether those lives mattered or what the victims should have done to avoid the situation.

“The notion of living in your skin always came with a degree of risk” for Blacks, Tribble said. “You have to have an exoskeleton. You have to be on alert. Now you have to be on alert of the pandemic. You’re reminded on the news that you might not live. We’re trying to find safety and joy in normal activities (because) stress becomes distress. Operating on a constant level of alert is not a healthy way to live.”

Black and other communities of color have faced any number of stressors – physical, chemical and emotional – long before the pandemic and Floyd’s killing by police in Minneapolis.

Research shows low income and minority communities are at higher risk of air pollution because they live in close proximity to industry, automobile exhaust and other sources of pollutants.

Even when they reach the same degree of success and stature in a community, African Americans and Latinos are more likely to experience financial stress and have higher levels of what researchers call “major life events,” such as losing a loved one or losing a job.

“COVID-19 has just exacerbated all of these stressors,” Williams said. “In addition, African Americans and other populations of color also face higher levels of discrimination,” he added, from major instances such as being stopped, threatened or abused by police to discrimination at work to everyday episodes of discrimination.

Williams created a scale decades ago to assess that discrimination and its effects.

“It just captures little indignities, (being) treated with less courtesy and respect, receiving poorer service at restaurants and stores, people acting as if they think you are not smart or as if they are afraid of you,” he said.

Yet more reminders have been on display in recent weeks. The reactions, anger, frustration, sadness, anxiety and weariness in this historically charged moment, found public stages across the country.

At Santa Clara University, police officers demanded proof from a Black professor that she lived in her on-campus home and forced her to vouch for her brother who was visiting from Sacramento.

In tony Tiburon, across the water from San Francisco, police demand a Black business owner prove he owned his store when officers saw him and his wife working inside the business late at night.

“It’s so hard to keep watching it. That video – if you watch that video, you don’t need to be Black to be outraged. You need to be American and outraged,” Rivers told reporters. “It’s amazing why we keep loving this country and this country does not love us back. Like, I should just be a coach and so often I’m reminded of my color. It’s just sad.”

Rivers spoke directly to what he said was Republican Party fear mongering at its recent convention.

Days earlier, Danielle Fuentes Morgan, the Santa Clara University English professor, told the Washington Post of her experience with police on the Silicon Valley campus where she is one of few Black professors and where Black people make up 2% of the student body.

It’s an experience nearly universal to Black people regardless of age or profession, where they live or how much they earn.

The story’s headline: “I wasn’t surprised. I was hurt.”

“No one ever wakes up in the morning thinking that these things will happen,” Morgan said.

“It’s not extra sad or extra troubling because this happened to a college professor,” Morgan would later tell the Post. “It’s explicitly sad because this should not be happening in the year 2020.”

Black Americans historically have leaned upon family, friends, the church, sports or music to connect, function and reinforce a sense of belonging.

But the isolation brought on by the contagion from sheltering in place to distance learning has separated family, friends and networks and taken away those safety nets, Tribble said.

“That (dynamic) has significantly and severely changed. You don’t have that filter of negotiating your way through life,” she said. “Whether it’s protest or pain, there really is no wrong emotional feeling. But how do you channel that productively?”

‘A lot of people are grieving’

Seeking treatment or finding mental health counsel has also come with its levels of distrust and insecurity because of the disparate treatment Black and brown people have historically received in the behavioral health space and in health care more broadly.

Tribble said she is encouraging people and community groups to reach out to support people of color. Williams, the Harvard researcher, said neighborhoods and community organizations, workplaces and schools can create “environments of psychological safety,” to ensure people are treated respectfully and are allowed to express themselves without fear of being judged inferior or jeopardizing their careers.

African Americans increasingly are also choosing other outlets. Takla left her job at Kaiser Permanente to focus exclusively on her clients who are almost entirely Black. She conducts three group sessions per week.

“We’re all traumatized by this. A lot of people are grieving for a lot of reasons,” Takla said. “We can’t be oblivious anymore. We have to have systemic changes in place. We have to totally dismantle and rebuild.”

Others, like Land, are choosing to go it alone — for now.

“It’s overwhelming. It’s exhausting. It’s a challenge to say the least. It’s like, ‘Where do we begin?’ We are all so overwhelmed by the abundance of trauma,” Land said. But “there’s somebody out there who has it worse. Everybody out there is traumatized, so I do it on my own. COVID is a humanizing bonding agent. Trauma is, too. We’re all hurting.”

Working From Home in a Pandemic Is Not Shirking It

Thu Sep 24 , 2020
TipRanks 3 “Strong Buy” Stocks That Are Flirting With a Bottom In the investing game, it’s not only about what you buy; it’s about when you buy it. One of the most common pieces of advice thrown around the Street, “buy low” is touted as a tried-and-true tactic.Sure, the strategy […] 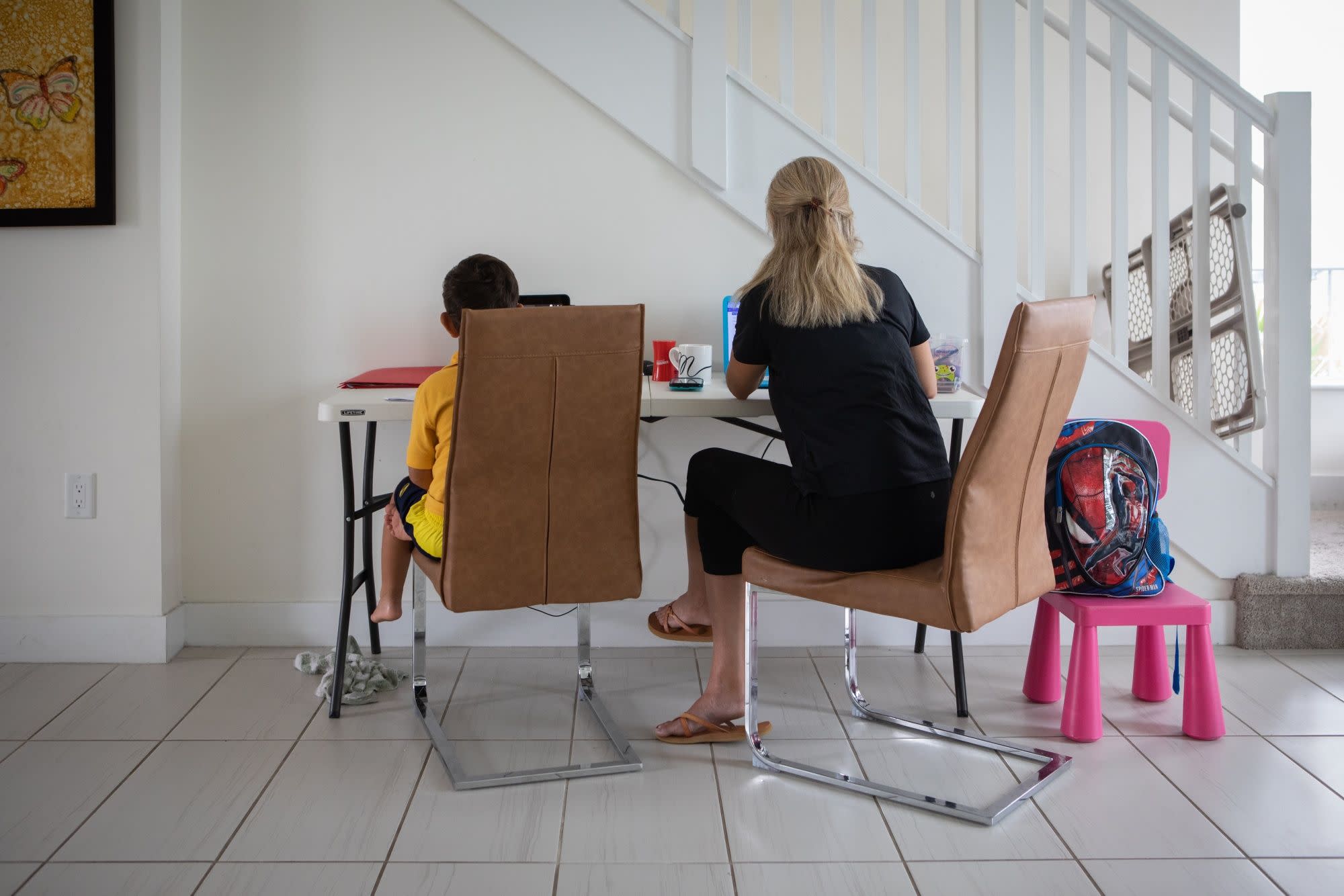