At one Wisconsin college, students wrote the Covid-19 rules — and they’re enforcing them. While most universities faced with an explosion of new coronavirus cases gave that job to administrators, Beloit College enlisted 20 students to write up a set of guidelines for navigating life on campus during a pandemic […]

At one Wisconsin college, students wrote the Covid-19 rules — and they’re enforcing them.

While most universities faced with an explosion of new coronavirus cases gave that job to administrators, Beloit College enlisted 20 students to write up a set of guidelines for navigating life on campus during a pandemic that they’ve dubbed “Behavioral Expectations.”

Rather than simply banning all events and other social gatherings, or shutting down the fraternities and sororities like many schools faced with campus Covid-19 outbreaks did, the Beloit rules recognize that students will be students.

“Faculty and administration do not experience campus life the same way students do, and with COVID-19, we realized students needed to help redefine expectations of campus,” junior Saad Ahsan, the Beloit student government co-president, said in an emailed response to NBC News. “We felt it was important to add behavioral guidelines to reflect the values of the Beloit student body.”

So, the student-designed rules spell out how to safely hold a party or hang out at a dorm and even give advice on other activities that are frowned upon during these socially distanced times.

“Hug sparingly, acknowledge that hugging might make others anxious,” the rules say.

“While smoking avoid sharing pieces or lighters, continue practicing physical distancing, and be conscientious of where you blow your smoke,” the rules say, specifically about cigarettes.

And always “physically distance as much as possible and wear cloth face coverings.”

For now, “indoor parties” are forbidden, the rules say. But outdoor events are a go but only in locations “recommended by the school” and they “have to be registered with the school.”

Located about 96 miles northwest of Chicago, Beloit is a private liberal arts school with an enrollment of 1,212. And in some respects, the anti-Covid-19 strategy at Beloit is similar to a Boston University campaign that also aims to enlist students in the battle against the spreading pandemic.

Tara Girard, a registered nurse who heads the Beloit College’s health and wellness center, said their plan to involve students in combating the crisis was first formulated back in March, well before the crisis began to crest in Wisconsin.

“We recognized that a top down ‘don’t do this, don’t do that’ approach was not going to work,” she said. “Knowing our students, it became clear they needed to play a part, that they were going to be asked to contribute.”

Girard acknowledged the school was asking a lot of students.

“Students are really paying attention,” she said. “They recognize that, right or wrong, a lot of this does land on their shoulders. They are doing things such as reporting fellow students who are not following the rules and complying with our strict quarantine guidelines.”

Are they working? While Wisconsin Gov. Tony Evers on Tuesday declared a new public health emergency because of a recent surge in new infections among people, the Beloit College Covid-19 dashboard reported zero new cases overnight.

Also, six students remained in isolation and 25 more are being quarantined, the dashboard reports.

Ahsan said there have been only a few instances when they’ve had to notify campus security regarding rule-breaking, but mostly what they’ve done is created a climate where “on a daily basis students can let other students know when they’re doing something that makes them feel uncomfortable.”

“Our biggest goal was creating a new social normal where you wear masks and social distance but where you can still live your life,” senior Seva Poitevin added. “I think we’ve done that.”

Thousands of students across the country have tested positive since they began returning to colleges and universities, forcing some schools to cancel classroom education and shift to virtual leaning and torpedoing the football season and other athletic events for many others. The main culprit has invariably been young people who fail to follow school requirements to wear masks and social distance and who insist of partying both on and off campus despite the pandemic.

The researchers estimated that an extra 3,200 cases per day in the U.S. would have been avoided had schools kept classes online.

“We’re not saying it was a terrible mistake to open,” said Ana Bento, an assistant professor of infectious diseases at Indiana University and co-author of the study. “Just that the influx of individuals, which was much greater where there is face-to-face [instruction], is correlated with a larger increase in cases.”

While Dr. Anthony Fauci, the nation’s leading infectious disease expert, and other public health mavens have warned repeatedly of a resurgence of Covid-19 cases in the coming months, President Donald Trump continued to downplay the danger as he has since the start of the pandemic.

Trump, who is blamed for politicizing the use of masks by refusing for months to wear one in public, went so far as to mock his Democratic rival Joe Biden for regularly taking what public health officials agree is a proven way to slow the spread of the virus.

“I wonder in the debate, when him and I get on stage, is he going to walk in with a mask?” Trump joked during a campaign rally in Pennsylvania where hardly anybody was wearing a mask.

The first presidential debate is next week.

And experts say there is no end in sight to the pandemic.

Covid-19 “activity will likely continue for some time,” Dr. Robert Redfield, the head of the federal Centers for Disease Control and Prevention, said in remarks prepared for Wednesday’s Senate hearing.

In other coronavirus developments:

Thu Sep 24 , 2020
At one Wisconsin college, students wrote the Covid-19 rules — and they’re enforcing them. While most universities faced with an explosion of new coronavirus cases gave that job to administrators, Beloit College enlisted 20 students to write up a set of guidelines for navigating life on campus during a pandemic […] 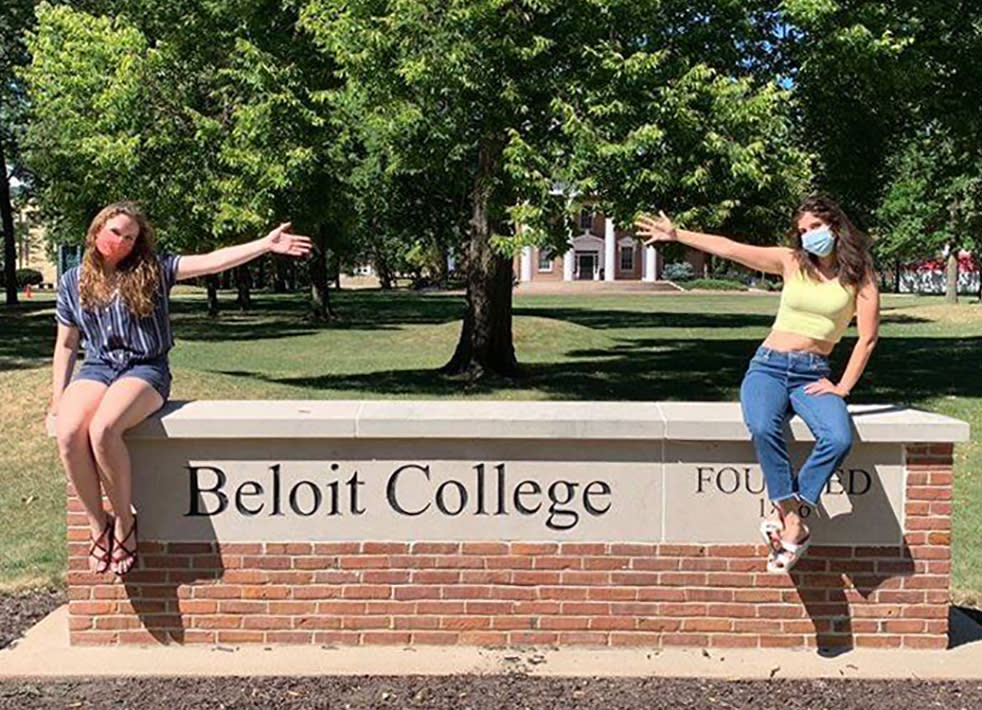