Two NHS trusts have become the first in the UK to allow patients to access their hospital medical records on their iPhones, though Apple’s Health app. While it might seem like a small change, it could be the start of major changes to how we talk to our doctors – […]

Two NHS trusts have become the first in the UK to allow patients to access their hospital medical records on their iPhones, though Apple’s Health app. While it might seem like a small change, it could be the start of major changes to how we talk to our doctors – and how they talk to us.

For the hospitals, it’s a chance to help encourage patients to engage better with their healthcare by getting hold of their data.

“It is, in our view, not right that patients can’t routinely access their medical records in the same way that, if they choose, they can access their banking records or so much other information that they own online,” says Joe Harrison, chief executive of Milton Keynes University Hospital NHS Foundation Trust.

While the Health Records feature has only been live with the trusts’ systems for nearly two weeks, Milton Keynes reports over 300 users have connected their patient records with Apple’s Health app, while OUH says it has had a few dozen signups.

The Health Records feature in the Health app won’t give patients access to any more information than they can get through the trusts’ patient portals, but it does allow them to access those details in a new way, alongside the other health information – such as details on their sleep and exercise – that the Health app holds.

“We’re the custodians of information, it’s not our information,” David Walliker, chief digital and partnership officer at OUH, tells ZDNet. “If patients want to access the data and we can do that securely, we should be doing it.”

While the Health Records feature will, in most cases, only show patients information they’ll be expecting, it is possible that in rare cases the app will also deliver details of a serious illness.

For Milton Keynes, the trust’s portal doesn’t connect to patients’ medical imaging and histopathology, so the results of scans and biopsies won’t be available through the Health Records feature. As such, investigations are typically used to determine serious diagnoses, patients are unlikely to discover they have conditions such as cancer through the Health app.

However, blood tests that can suggest a recurrence or progression of a disease – raised levels of a marker called PSA in the case of prostate cancer, for example, or a raised HbA1c in the case of diabetes – may be viewable within the app.

Typically, doctors would normally deliver such information to patients in person, but because the Health app may pull in test results at the same time as hospital systems, patients may see that information at the same time or even before their doctor. For clinicians, that might mean taking extra care to make sure patients are aware of what the tests might show ahead of time.

“It’s beholden on me to prepare them for what those results might show,” says Debbie Philips, consultant surgeon and chief clinical information officer at Milton Keynes. “So it might slightly push us towards framing discussions with patients along the lines of ‘I’m doing these tests, this is what we’re looking for, this is what it might show’, and I would argue that should be part of what we already do, but it will now be even more important to do that.” That process might include pointing patients towards where they can get help if they see the results before their doctor has had a chance to discuss it with them.

OUH’s system can accommodate a short delay, such as 48 hours, in when sensitive results are made available to patients, to allow a clinician to break the news face to face and answer any questions immediately.

The Health app pulls the details from the trust’s own electronic health records using APIs based on the FIHR (Fast Healthcare Interoperability Resources) standard, and patients use the OAuth authentication to verify the attempt to connect the app with the patient portal’s data is legitimate. Data stored on the device is encrypted, and where data is updated, the information is encrypted in transit.

According to Craig York, Milton Keynes’ CTO, the trust was contacted by Apple about offering the functionality at the start of the year, and the process of preparing the trust’s systems for the new connection took under 12 weeks. The most significant amounts of work involved installing and checking the prerequisite FIHR APIs, and then mapping patient record data to the APIs and testing the work, he says. The trusts also had to undertake data protection impact assessments around the work, and work with governance teams and local Caldicott guardians, whose job it is to safeguard the confidentiality of data within the NHS and ensure it’s used appropriately and ethically.

In the UK, the Health Records feature will allow users to see records from multiple hospitals, clinics, and trusts in one place – something not traditionally seen in secondary care.

GPs, rather than hospitals, have led the way on enabling patients to access their records through apps and websites, after it became mandatory to offer access to current and historical records online from earlier this year, as part of the new GP contract. Secondary and tertiary healthcare organisations, such as hospitals and clinics, haven’t moved at the same pace, particularly as some institutions still make use of paper notes.

SEE: If we put computers in our brains, strange things might happen to our minds

Milton Keynes and OUH trusts have already been in discussions with other UK trusts who are considering rolling out the functionality locally. The functionality was also made available in Canada for the first time earlier this month. The Health Records feature debuted with the launch of iOS 11.3 in 2018, and in the US, over 500 healthcare providers across 11,000 locations now integrate their electronic patient records with the Apple Health app.

OUH’s Walliker said he expects those who will find the Health Records feature useful will be people with chronic conditions who need regular blood tests and other investigations. Ultimately, for hospital-connected health to be really beneficial for patients with long-term conditions, they’ll need to allow patients to input, as well as receive, data from hospital systems. If patients could share data with such apps, rather than being offered an appointment with their medical team on a regular 12-monthly schedule, say, they could request one when their home monitoring or symptoms worsen.

“I think that will then change the relationship between the patient and the doctor, because the patient will be more empowered to look after their condition,” he says. “As more functionality is added to the portal, or in the future there are other partnerships with other health app vendors, it means we’ll be able to consume information from patients, as well as provide it back out. I think that’s where we’ll see a big change in the way we deliver care.”

Wed Oct 21 , 2020
Beverly – David L. Cushing, 68, died October 17, 2020, at Mass General Hospital after gracefully managing a long and challenging illness. He was born in Portland, Maine, to the late Stanley and Mary (Ballem) Cushing, and also raised by his step-father, the late Eldred Anderson. It was here that […] 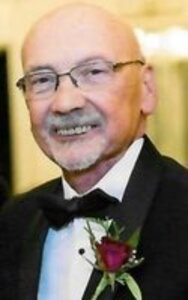