MILWAUKEE — The woman was screaming. Crying. Bleeding. Hit with a rubber bullet as police cleared protesters out of Kenosha’s Civic Center Park on the night of Aug. 25, she lay on the ground, possibly in shock. Gaige Grosskreutz knelt beside her. Trained as a paramedic, he carried the equipment he needed to […]

MILWAUKEE — The woman was screaming. Crying. Bleeding. Hit with a rubber bullet as police cleared protesters out of Kenosha’s Civic Center Park on the night of Aug. 25, she lay on the ground, possibly in shock.

Gaige Grosskreutz knelt beside her.

Trained as a paramedic, he carried the equipment he needed to treat her wound.

Only a few people remained in the park, but the line of officers in riot gear kept advancing. There was no indication they would break rank to let him work on the woman. And none of them offered to help.

Grosskreutz and some other men had to pick her up and move her once, then again, then a third time. They ended up on a hill, where Grosskreutz was finally able to stop the bleeding.

The woman, once stable, got to her feet. Grosskreutz stood too. The police had moved on, but another group of heavily armed men — all white, none with badges — had entered his field of vision. Dressed in camouflage and olive drab, they wore body armor and carried rifles.

Within minutes, Grosskreutz would be the one bleeding on the ground.

He survived a triple shooting

Grosskreutz was among three people shot on the third night of protests after Kenosha police shot a Black man, Jacob Blake, seven times in the back.

The two other victims of the Aug. 25 triple shooting, Joseph Rosenbaum and Anthony Huber, did not survive.

The shooter, Kyle Rittenhouse, 17, of Antioch, Ill., considered himself a citizen soldier. That evening, armed with an AR-15, he told several people he had traveled to Kenosha to help protect life and property. Rittenhouse has been charged with five felonies including first-degree intentional homicide. His lead attorney, John M. Pierce of the law firm Pierce Bainbridge, plans to argue self-defense.

Grosskreutz sees the demonstrations against police brutality as a first step toward ending inequality and bringing about the ideal of justice for all.

“I want to be there and help amplify my brothers’ and sisters’ voices,” he told the Milwaukee Journal Sentinel on Thursday.

That interview and an appearance on CNN the same day marked the first time he has spoken publicly about the shooting.

A Milwaukee native who now lives in West Allis, Grosskreutz, 26, went to his first protest, in support of LGBTQ rights, during his freshman year of high school. His American Politics teacher excused him from class to go.

Grosskreutz ultimately became a paramedic because he wanted to help ease peoples’ suffering, both physical and emotional. He doesn’t remember the first time he treated a gunshot wound — there were so many they all ran together. He also came to the aid of dozens of people who had overdosed.

He is now studying outdoor education with an emphasis in program administration. His career goal is to work in wilderness therapy, as part of a team that uses activities such as kayaking, skiing, camping and swimming to help people overcome trauma or substance abuse.

His education was put on hold, and his career put at risk, the night he was shot.

Jacob Blake speaks from his hospital bed: ‘Change your lives out there’

Both patient and paramedic

Videos of the shooting have circulated widely on the internet. They show the moment a .223 rifle round shredded Grosskreutz’s right bicep.

“I really felt that in that moment I was the best trained person to help myself. You know, I just, it was like an ethereal or an out-of-body experience,” he said.

He was both patient and paramedic.

“I mean, in my head, I’m thinking and just knowing, like with my experience and in my training, that with what just happened, I’ve got, you know, three minutes before I pass out. And if nobody around me knows what to do, that’s even worse,” he said.

Surrounded by gunshots and chaos, worried he could be shot again, his training kicked in. He used his left hand to put pressure on his wounded arm, all the while shouting for a medic. A live-streamer who broadcasts on a channel called “CJ TV” was the only one who rushed to his aid. Grosskreutz had a tourniquet in his backpack.

“I hope to God you know how to use this,” he said.

CJ stammered. In his head, Grosskreutz told himself they could work through it. He gave instructions, showing CJ where to put the tourniquet and repeatedly ordering him to make it tighter.

“I mean, he saved my arm, helped save my arm for sure,” Grosskreutz said. “And he very well could have saved my life, because who’s to say how events would have played out.”

Continuing to fight for justice

Grosskreutz was treated at two Kenosha hospitals before being airlifted by Flight for Life to Froedtert Hospital in Milwaukee.

He knew that meant his condition was serious, but the critical care paramedics on the helicopter put him at ease. He even made a joke about how he never thought his first medevac ride would be as a patient.

At the hospital, the conversation grew serious as doctors raised the possibility that they might have to amputate.

“I broke down for a good while, but then I started thinking that, you know, I walked away with my life that night,” he said. “There are two people who didn’t. You need to be very thankful (to be alive). And you need to be strong for them.”

After three surgeries and a week in the hospital, Grosskreutz is home. He’s in constant pain, but he won’t take opiates; he’s wary of them, and he’s seen the damage they can do. It’s not clear how much function he’ll regain in his arm. He is grateful doctors left him with the option of amputating later, if it comes to that.

The shooting and its aftermath have changed Grosskreutz’s life. The injury to his arm has left him unable to serve as a medic. He doesn’t have the upper body strength for much of the outdoor recreation he loves. He’s been threatened online, which is why he’s reluctant to reveal some details about his family and where he went to school.

Others online have tried to smear his character by claiming he’s a felon who wasn’t legally allowed to possess the handgun he carried the night of the protest.

He does not have a felony record, according to online court records.

‘It’s surreal in the worst possible way’: Kenosha reels after Jacob Blake shooting and a week of violence

“I’m a young adult trying to live their life,” he said. “And I exercise my First Amendment right to protest and peacefully assemble and freedom of speech. And yes, while I do have my concealed carry (permit), I personally believe that it’s maybe not necessary all the time.”

But there’s also a positive side to the notoriety: Grosskreutz has a wider platform to inspire others to work for change.

He has no plans to quit marching.

“There’s a lot of work to be done in this country,” he said. “And I think at the forefront of that, it’s … equity and accountability and, you know, the way for humans to live their lives in peace.”

An online fund has been established to help Grosskreutz cover his medical bills. To contribute, visit: https://www.gofundme.com/f/help-kenosha-protestor-with-medical-bills

This article originally appeared on Milwaukee Journal Sentinel: Medic recalls being shot in arm by Kyle Rittenhouse at Kenosha protest

Fri Sep 11 , 2020
Robert A. Ripps Rhonda Roland Shearer Rhonda Roland Shearer is no stranger to helping others obtain protective equipment in times of disaster and emergency. Just days after the 9/11 terror attacks in 2001, the New York resident and her daughter, London Allen, showed up to Ground Zero and started the […] 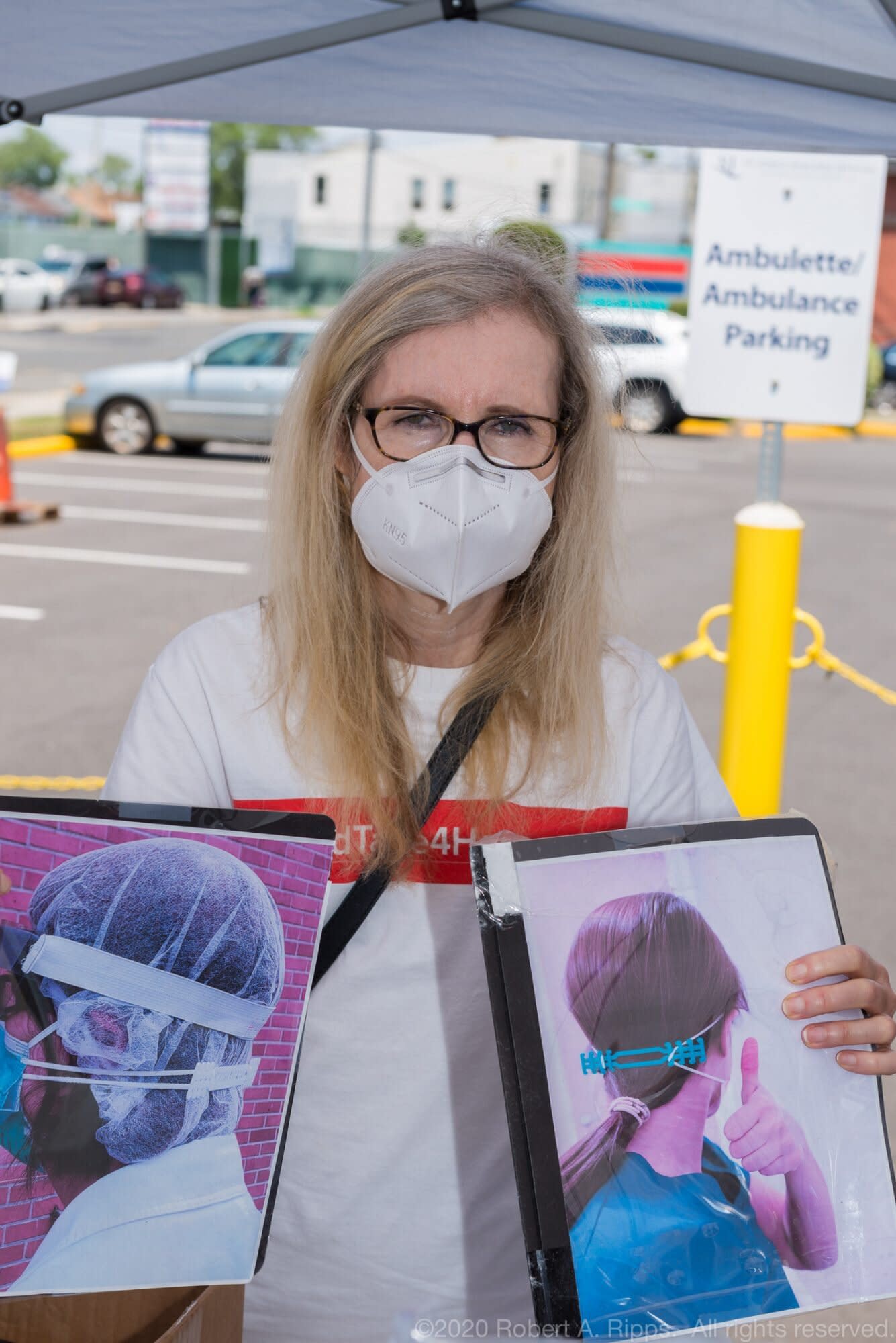