(Bloomberg Opinion) — On March 16, Lisa Eskenazi Boyer was working up a sweat with her students one last time at her bustling Queens, New York, fitness studio. Covid-19 lockdown orders were about to take effect, and Simply Fit Astoria — along with all other local gyms — would have to close its doors later that night. She never expected it to be for good.

When Eskenazi, 37, first started Simply Fit, “boutique gyms” weren’t yet part of New York City lingo. It was 2009, the height of a different crisis. It took a costly renovation, which Eskenazi describes as “the price of a house,” to convert a Byzantine woodworking factory into a sleek studio outfitted with spin bikes, lockers and other equipment for its heart-pumping classes.

New York Governor Andrew Cuomo allowed upstate gyms to reopen this week; gyms in New York City are expected to follow in early September. But the indoor classes that sustained Simply Fit still won’t be allowed. Resuming gym operations also comes with prerequisites, some of which may be manageable for big-box health clubs but are onerous for smaller businesses: Facilities are limited to 33% capacity; HVAC systems must meet certain guidelines; and masks are to be worn at all times.

Seeing where the fitness industry was heading — online, at home — Eskenazi permanently closed her business in July, weeks before the announcement of these new mandates. The Brooklyn and Long Island native said she isn’t dwelling on it. Instead, she’s hopeful and excited for the prospects of an online-enabled future, as social media, along with streaming software and web-booking tools, allows her to keep her fitness-training career thriving and perhaps even build on it. Covid-19 may change the look of many industries, but it’s not the end of them. Some may emerge better than before, as consumers come to appreciate the conveniences of spending more time at home.

Here is a lightly edited transcript of my conversations with Eskenazi Boyer:

Tara Lachapelle: After all that time and effort building your studio business, how did you decide to close and switch to virtual training and classes?

Lisa Eskenazi Boyer: Every piece of me went into that place. It was my dream come true. Fast forward to a few months back, and we continued to actually pay the full rent March through June, and with donations [for virtual classes] people were being very generous. I, of course, decided not to pay myself to keep things going. When I finally approached the landlord and was like, “Hey, I’ve been paying full rent this whole time, I’m really kind of out of money, can you help me out a little bit?”, it was a hard “No.” But you know what, it was a whole decade, I reached my goal, I affected thousands upon thousands of people. It was a really good endpoint.

And honestly, I think that fitness will eventually be virtual anyway. This just accelerated everything by a few years, and so I just took that and said, “That was a good chunk of time, I did great, it was a huge success, things will be virtual anyway, let’s do this.” What’s funny is that a few days prior [to the lockdown orders] I started to set up to teach virtually because I knew, just based on consumer attitudes, that people would be fearful and they would want to stay home, so my plan was to go live on all the social platforms. It was a decision I made to close. Covid was the push, but it pushed me in the correct direction.

TL: Did you ever think that would be your last time teaching there?

LEB: Not at that time, no, I really didn’t think that would be the end. I thought the lockdown would be about a month. But once they started announcing the phases [for reopening] and gyms weren’t ever mentioned, that’s when I knew. I had started going in with a measuring tape and was spacing spots out, and we had concepts on the schedule — cycling, specifically, and also the barre classes, where you just can’t socially distance, or you can but it wouldn’t be worth it for the business to even run for that hour. So once I started doing the hard math and looking at all of the money that would have to go into, let’s say, renovating a little bit or doing the extra sanitation, having more people working, spacing out the classes to where you now couldn’t have as many services in a short time — once you start doing the math, you’re like, this is not even worth doing, we have to think of something else.

The brick and mortar was just not good for social distancing. Even in our hallway, for example, I wouldn’t have been able to have two people walking. You wouldn’t be able to use locker rooms because everybody would be close together. The showers. The waiting area. It was just a mess. Even if gyms do open up, a lot of people don’t want to go back because of the heavy breathing and sweating and they feel that the filtration from the air conditioners is just not sufficient.

TL: What do you think about New York City’s handling of reopening gyms?

LEB: It’s as if the boutique fitness industry was completely overlooked in all of this. I’m choosing to believe this was all done in our best interest, because New York City and New York State did such a great job at mitigating [the virus]. But just an entire sector of the industry to be completely ignored — it’s a huge industry in New York City and in every major city. For me, it just really validated the decision that I made to close.

Even if the studio would have been allowed to open at 33% capacity, that wouldn’t have been enough to cover the costs. For all fitness studios, the margins are very tight. I know I always needed a minimum of 50% capacity to cover the cost of the business. To operate at 33% capacity for an indefinite period of time, it’s just a nail in the coffin. And not all of us have HVAC systems. We had a split-duct system, so I would have had to switch to HVAC, which based on my square footage would’ve been maybe a $20,000 to $40,000 investment. To put small studios in the same category as these large gyms, we’re just not working with the same capital. I wouldn’t have been able to do it. It would have completely bankrupted me, truly.

TL: Do brick-and-mortar gyms have a future?

LEB: I think that there’s always going to be a place for gyms. But a lot of people are starting to understand the value of their time a little bit differently. Now that we’ve gotten a taste of what it is to work out outside of a gym, we now see how doable it is. You find these little pockets in your day that maybe prior were used to just watch TV or commute. When gyms do reopen, we’re going to see a whole new industry. But for me, I don’t think owning a studio is something that I’m interested in anymore because not being tied down to a place like that has opened up my mind to all of these other things that I would never have done. It gives me a lot more freedom. Now, even if I take a vacation, I can still teach my classes as long as there’s Wi-Fi. It’s great.

LEB: Hard. I have to keep completely different hours now. I wake up before the baby does to make sure that I get a jump on my emails and my social media and all the stuff around the house. I don’t have child care. It is quite the balance. But I think that’s part of what led me to make the decision that I made, because had [my daughter] not been around, I would’ve just continued to sacrifice and pull from myself, and I would have went back to work with no pay and done whatever it took. It was because of the baby that I said, “That’s not fair, there’s someone else now that needs me.”

LEB: The other studio and gym owners in Astoria have just been so lovely, and I’ve made connections with all of these other business owners that I never had. Going through this together has really brought us all together. Some of us are starting to talk about doing a fitness festival in the park, where we all come and have a day of classes outside. Of course, restrictions would need to lift so that we can gather in large groups and actually file for permits. But the brain just opened up to all these new things that we would never have done before.

This column does not necessarily reflect the opinion of the editorial board or Bloomberg LP and its owners.

Tara Lachapelle is a Bloomberg Opinion columnist covering the business of entertainment and telecommunications, as well as broader deals. She previously wrote an M&A column for Bloomberg News.

Sun Aug 30 , 2020
Record-low mortgage rates have helped put more Americans in a homebuying mood in recent months. But with the coronavirus still spreading, many sellers are keeping their social distance. About 6% of homes that went on the market in July held open houses within the first week, according to real estate […] 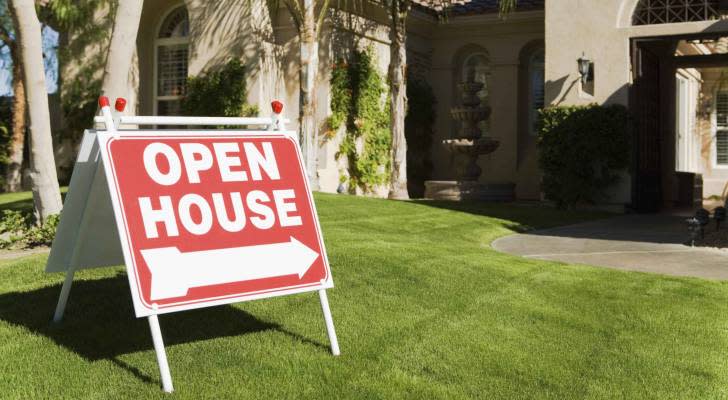