CEDAR FALLS — Five minutes is plenty of time for those trying out what it’s like to live with dementia. Once-familiar carpeted hallways transform into a maze with no solution. Locating a coffee cup, feather duster or book laying about the house feels cumbersome; remembering what you planned to do […]

CEDAR FALLS — Five minutes is plenty of time for those trying out what it’s like to live with dementia.

Once-familiar carpeted hallways transform into a maze with no solution. Locating a coffee cup, feather duster or book laying about the house feels cumbersome; remembering what you planned to do with those items is worse.

By altering sight, sound and touch, the “dementia simulation house” at the University of Northern Iowa sends people into that world with a higher purpose.

The simulation house is operated within UNI’s gerontology program. The field of study draws an average of 12 students annually who plan to make a career of working with people much older than themselves.

Anyone can sign up online for the free simulation in a three-bedroom Cedar Falls home, complete with family pictures on the wall and coffee in the cupboard. The setting places it apart from other dementia simulations, in Iowa or elsewhere, which are often smaller-scale and portable.

More: What I’ve learned about helping my grandfather navigate dementia, from a simulation house in Iowa

But the setting is also purposeful: four out of five people with dementia live in a home, not an assisted living facility. And the population, numbering 6.5 million people with Alzheimer’s alone in the United States, could more than double by 2050 based on some projections a result of the aging baby boomer generation.

Eshbaugh wants the simulation to attract more than just people who work in assisted living facilities. Her hope is to educate members of the public who encounter people with dementia regularly, like those who work at the local dentist’s office or hair salon.

Eshbaugh and other UNI educators want to dish out strategies that keep more pennies in people’s pockets.

So far, they say, it’s working.

Before the simulation house’s soft opening in February, Eshbaugh wondered if anyone would come.

What you’ll experience: Simulation goes beyond sight, sound and touch

Entering the house at 8712 University Ave., participants are asked to accomplish activities they could encounter in everyday life.

Most forget what they were supposed to do.

UNI staff stand nearby, ready to give reminders. But they also give a warning: They will respond as if they have already been asked dozens of times.

Often, those undergoing the simulation end up milling about the house, looking confused in their goggles, headphones and gloves.

“I think the biggest thing I learned is just the importance of giving people grace,” UNI social work major Hannah Kelley said after a simulation recently. “You don’t know what’s going on in their head or with them physically. You can only see what you can see about another person.”

More: Report: Up to 18% of adults over 60 have early stages of memory loss, cognitive problems

Much of the 40-minute simulation is spent sitting on patterned living room couches, debriefing. If it’s confusing for people in the simulation to walk about the house, Eshbaugh pointed out, imagine having dementia and trying to hold a conversation.

In explaining memory loss, she said to imagine there is an older man who keeps packing a bag of clothes, saying he and his wife are going to Nebraska.

But he can’t drive, and his wife died 10 years ago.

One option is to tell him the truth. But doing so will revive the pain of that reality, just to be forgotten minutes later.

A better option is what Eshbaugh calls “therapeutic fibbing,” more commonly known as “validation therapy.” The response will play along and redirect the conversation. Something like, “Oh shoot, we forgot to tell you your car is in the shop. Could we postpone for a week?”

To have that conversation with anybody who has dementia, Eshbaugh said she would begin six feet away and introduce herself by name. Once recognized, she could move in to three feet.

That’s because dementia alters spatial awareness. Entering someone’s personal space too quickly or indirectly can be shocking; someone’s face can appear broken into pieces, like a puzzle that is hard to put back together.

Even a touch on the shoulder as a greeting could be alarming, because a brain with dementia struggles to interpret physical touch and texture like it previously could.

Many participants are surprised to learn how much dementia goes beyond memory loss, said Carly Spies, one of the UNI students who helps run the simulation.

The 22-year-old, who is pursing a double major in communication disorders and gerontology, said there’s a lot of life to live after a diagnosis, especially with the right knowledge.

“I think that’s the really cool thing, is people walk away (from the house) with more confidence in helping people with dementia,” Spies said.

“That can be difficult,” said Clark, 22. “But for the most part, even those difficult conversations are uplifting in a sense, because they’re coming together and having an understanding about something they didn’t previously.”

Clark once planned to major in graphic design. Then her grandfather, who had Alzheimer’s, died last summer.

“My mom has a lot of siblings, and watching a family of seven navigate that was kind of challenging for me. And that’s when I became aware about the lack of resources available to the aging population,” she said.

Now she’s going into long-term care administration, one of the tracks within UNI’s gerontology major. She said it’s hard to listen to people talk about the age they think is “old,” or become afraid of spending their later years in an assisted living facility.

“I would like to be a part of that change; addressing those issues,” she said. “As a society, because we see it that way, it’s hard to make those years great.”

More: Scientists are studying blood tests for dementia: ‘A new era of diagnosis for Alzheimer’s disease’

Eshbaugh runs the gerontology program with that in mind. She wants to see a culture shift away from older adults being “served” to being part of a community.

“Because when we just say, ‘You’re here and we take care of you,’ what that does is it takes away their sense of purpose and their sense of meaning,” Eshbaugh said.

Much of that culture change needs to come from educating staff who work directly with older populations, she said. Going without the proper education is a disservice to those staff — they aren’t being prepared to thrive in their jobs, driving turnover— as well as the people who they care for.

“If you see different faces in and out, particularly if you’re someone who has dementia, that’s traumatizing and confusing,” she said.

More than half of gerontology students don’t end up working in an assisted living facility, Eshbaugh said. It’s not where most older adults live.

“I’m not focused on whether my future nursing home administrators can name off every part of the brain and how it’s impacted by Alzheimer’s. But they need to know how to interact with someone who has Alzheimer’s,” she said.

Eshbaugh said there is a wide field of jobs within the growing industry that many don’t realize exist: working in programs that help older people travel, or creating technology that helps them stay in a home longer, for example.

“My program is not going to qualify you to take someone to the bathroom,” she said. “This is a program where you are given leadership skills to change the field, and change the culture of aging.”

Cleo Krejci covers education for the Iowa City Press-Citizen. You can reach her at [email protected]

Far from Milwaukee, a son mourns his father's death with the help of an area synagogue

Wed May 18 , 2022
My father, Jerry Feldman, had decided he had had enough. After two weeks in a Chapel Hill, N.C., hospital, with terminal cancer and no quality of life left, he asked his palliative care physician to help him die. She removed his breathing support and ensured he had enough sedation to […] 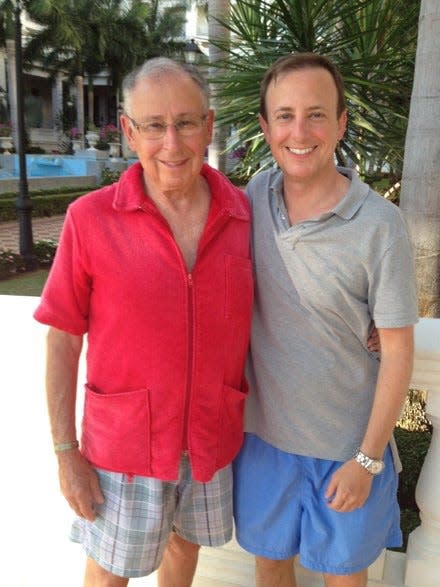