Image via Getty Images. The following article contains subject matter related to eating disorders that may be sensitive for some readers. I developed bulimia nervosa when I was 15. I had never been fat, but I also wasn’t skinny. I was always just a bit bigger than my friends – […]

The following article contains subject matter related to eating disorders that may be sensitive for some readers.

I developed bulimia nervosa when I was 15. I had never been fat, but I also wasn’t skinny. I was always just a bit bigger than my friends – enough that it was obvious and made me feel insecure when I was around them.

I never felt insecure enough about my body to do anything about it, until some comments were made about my weight. I was walking out of the school gates one day when a couple of boys behind me started laughing, pointing at me and calling me “tree trunk legs.”

ALSO SEE: Why the trope of the fat, unlikeable character in books needs to end

On a separate occasion, I was at a music festival when I bumped into someone I had briefly spoken to online . I was later told by a mutual friend that the person said they “couldn’t believe how much fatter I was in person.”

After those comments, my body became my sole focus. It started with looking at myself constantly in the mirror, picking apart my body, starring at all the parts that were too fat. That I needed to change. Eventually, I began hanging blankets over my mirrors so that I could avoid looking at myself altogether.

And then I started making myself sick. I remember the first time I did it. I’d started restricting calories – to the point I was measuring out cereal, avoiding foods like butter and anything I believed to be fattening. Most nights, I’d crack, and end up bingeing. The thing with bingeing is that you eat until you become uncomfortably full; it’s hard to stop because it’s almost like there’s no limit, no wall to hit.

One night I’d eaten so much that I felt more ashamed of myself than ever before. I went up to the bathroom and purged. It wasn’t much; it was hard to make myself sick without gagging. Afterwards, my body was shaking and my throat felt raw. But it became like a routine for me, something I felt I needed to do in order to alleviate some of the guilt from bingeing.

ALSO SEE: ‘I don’t need an excuse for every mark’: Blogger’s powerful photos offer an alternative to body positivity

I was making myself sick for a little more than a year — before it nearly killed me. I began experiencing severe chest pain and difficulty breathing. At the hospital, I was diagnosed with bacterial pneumonia caused by vomit caught in my chest cavity and a collapsed lung. I was in intensive care for three weeks and required oxygen to help me breathe as well as a chest drain in my lung which drained two litres of fluid.

The experience was enough to keep me from purging out of fear that next time, I wouldn’t be so lucky- but the bingeing continued.

I’m now 25 and I have binge eating disorder, a severe kind of eating disorder in which a person eats large quantities of food over a short period of time. It’s not about choosing to eat extra large portions and it’s not “overindulging.” Nothing about binge eating is enjoyable.

Binges are distressing, and it can feel as though it’s impossible to stop during a binge even if you want to. Some people with binge eating disorder even feel disconnected from what they’re doing during a binge, or struggle to remember what they’ve eaten afterwards.

Binges are like a nightly ritual for me. They’re often planned in advance and I usually buy special binge foods. Some people may say it would be easy to stop if I just stopped buying these foods – but it’s not. It’s like an addiction; if I don’t buy the foods, I sit with this awful urge to buy them later. It will be all I think about until I go out and get them. It’s like being a smoker, desperate for that next hit of nicotine, but there are no cigarettes in the house.

Sometimes binges are triggered, especially if I’m feeling sad. Food is a comfort for me. Even though I hate what I’m doing, every mouthful fills a void. But the feeling doesn’t last long and I almost always end up feeling guilt and shame. Every time I sit there uncomfortably full, when it’s all over – which is usually hours after I first started – I feel horrible about myself. I punish myself for letting things get so out of control.

What’s hard is that I am always dreading the evenings, because that’s when my binges take place. Funnily enough, I eat normally during the day – and even manage to make healthy dinners. Some days I can go all day long without eating or even thinking about food, but then the evening hits and everything changes.

I can eat — and eat and eat. I can sit and eat 12 ice cream bars in a row, or a whole box of cereal or multiple family sized chocolate bars; and I hate myself for it. But in the moment, it’s like I’ve dissociated from the world and I don’t even know what I’m doing – it’s only when it’s over that I feel like I’ve come back down to reality.

When you have binge eating disorder, it’s not like you can just tell yourself to stop eating. The urges and emotions are so heavily implanted in your brain that it’s a vicious cycle of negative emotions, restricting what you eat and then finally, binge eating again.

The hardest thing for me now is that I feel like I don’t have any control over it at all. With bulimia, purging was my form of taking back control, and now I don’t even have that. Which is a messed up way of looking at it, but it’s my reality.

It’s hard to speak out about binge eating disorder because I often feel like I don’t “qualify” as having an eating disorder. I’m not underweight – in fact I’m overweight, and I’m not starving myself or making myself throw up. Even though I don’t do these things, I still struggle with control issues and the same negative emotions that I had when I was suffering with bulimia.

Most people don’t know that binge eating disorder is three times more common than anorexia and bulimia combined. I don’t know why it’s not talked about more often – but I’m guessing it’s because of the stigma around people with larger bodies, the belief that it’s an excuse for being greedy, or the fact that nobody would believe we have an eating disorder because we’re overeating.

Though it was hard to write this for these various reasons, I’m hoping it will people like me who are struggling with binge eating disorder. I hope it lets them know that they’re not alone and that their feelings are valid.

And, in turn, I hope that those who don’t understand binge eating disorder now have more insight into it, as well as more empathy and more knowledge.

I hope that one day, we’ll feel more confident in opening up about binge eating disorder – knowing it is just as valid as more publicized eating disorders.

Mon Sep 28 , 2020
Chrissy Teigen arrives at the 2020 Grammy Awards. (Allen J. Schaben / Los Angeles Times) Chrissy Teigen has been hospitalized for excessive bleeding while pregnant with her third child. On Sunday, the model and cookbook author offered an update from her hospital bed on her health, explaining that she has […] 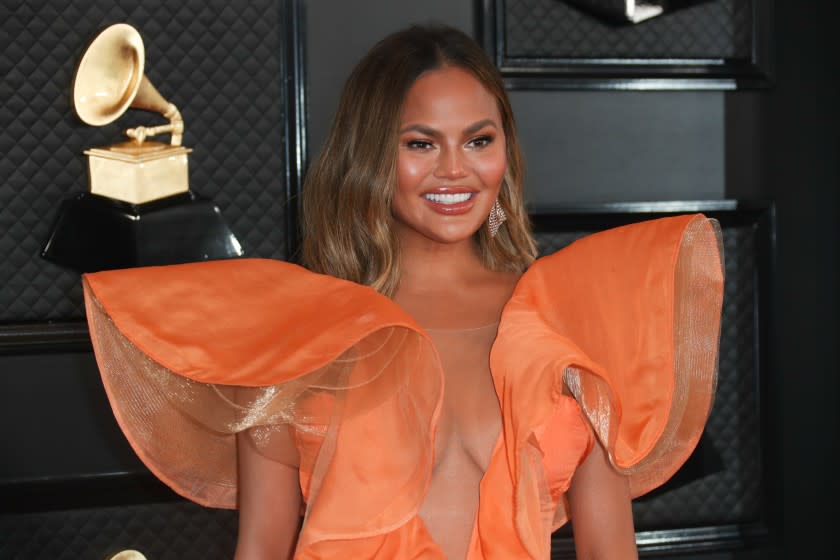