Rappers Megan Thee Stallion and Tory Lanez are back in the news, after Tory denied shooting Megan in the feet in one of his new songs.

The case has led to several high-profile rows in the US music industry.

It has also sparked a debate about perceptions of gender-based violence against black women, and concerns within the African American community about police brutality.

How did this begin?

During the early hours of 12 July, police responded to a “shots fired” incident in the Hollywood Hills, the Los Angeles Police Department (LAPD) said in a statement.

An argument is reported to have taken place inside a vehicle, with shots fired into the air, before the vehicle left the scene.

The LAPD said officers then conducted a “traffic stop” on a vehicle matching a description provided by eyewitnesses, and “multiple individuals were detained”.

Tory Lanez, 28, whose real name is Daystar Peterson, was charged with carrying a concealed weapon and released on bail later that morning.

In a statement on 15 July, Los Angeles police said another person was brought to hospital and received treatment for an unspecified “foot injury”.

Megan Thee Stallion – whose real name is Megan Pete – alleged that four people were in the car at the time: herself, a friend, Mr Peterson, and his bodyguard.

Initially, TMZ reported that Ms Pete had cut her foot from broken glass in the car. But on 15 July, she released a statement saying she had suffered “multiple gunshot wounds… done with the intention to physically harm me.”

I was never arrested. This whole experience was an eye opener and a blessing in disguise. I hate that it took this experience for me to learn how to protect my energy.

Several days later, in an Instagram post, Ms Pete shared graphic images of the stitches in her heel, and of doctors attending to her foot.

On 20 August, for the first time, she named Mr Peterson as the alleged shooter while speaking in a video on Instagram Live. She said when police found her, she did not tell them what had allegedly happened because she feared they would start shooting if they believed a gun was involved.

“I didn’t tell the police nothing, because I didn’t want us to get in no more trouble than we was about to get in,” she said, denying that she had physically assaulted Mr Peterson.

The Los Angeles County district attorney’s office has said it is reviewing another charge against Mr Peterson over the alleged shooting. A spokesperson told the Los Angeles Times that a decision would be make after further investigation by law enforcement.

Sources told the newspaper a bullet round may have deflected, with shrapnel hitting Ms Pete.

How has Tory Lanez responded?

In his new album, Daystar, released on 25 September, Mr Peterson references the incident in several songs and denies that he shot Ms Pete. It is the first time he has publicly responded to the allegations.

“Megan people tryna frame me,” he raps during the song Money Over Fallout. “Girl, you had the nerve to write that statement on that affidavit, knowing I ain’t do it but I’m coming at my truest.”

In the same song, he casts doubt on whether she was shot at all, asking: “How the f— you get shot in your foot, don’t hit no bones or tendons?”

Ms Pete has not publicly responded to the accusation that she is trying to frame Mr Peterson.

Why does it matter?

Both artists are highly successful in the industry. Megan Thee Stallion’s controversial song with Cardi B, called WAP, is currently number one in US singles charts – her second chart-topper of the year. Tory Lanez has also had several popular hits, most recently in April with The New Toronto 3.

The incident has spurred debate about violence against black women, and public perceptions of the issue.

Since her initial statement, Ms Pete has received support from artists including Beyoncé, Rihanna and Lizzo. But her accusations have been met with disbelief and ridicule as well.

Among those poking fun at her was rapper 50 Cent, but he has since apologised.

“I posted a meme that was floating around,” he wrote on Twitter. “I wouldn’t have done that if I knew you was really hurt sorry.”

Megan Thee Stallion has hit back at ridicule circulating online, saying: “This is my real life and I’m real life hurt and traumatized.”

Black women are so unprotected & we hold so many things in to protect the feelings of others w/o considering our own. It might be funny to y’all on the internet and just another messy topic for you to talk about but this is my real life and I’m real life hurt and traumatized.

Her apparent reluctance to tell police about the alleged shooting has also struck a nerve within the African American community about relations with law enforcement.

Dozens of US cities have been rocked by protests this year, sparked by the deaths of several black people at the hands of police – including George Floyd and Breonna Taylor.

Sun Sep 27 , 2020
Idles are (left to right) Mark Bowen, Lee Kiernan, Jon Beavis, Joe Talbot and Adam Devonshire When Idles live-streamed their Abbey Road sets last month, it was only right they took on the challenge of performing The Beatles’ heaviest and most explosive song. Frontman Joe Talbot threw himself so far […] 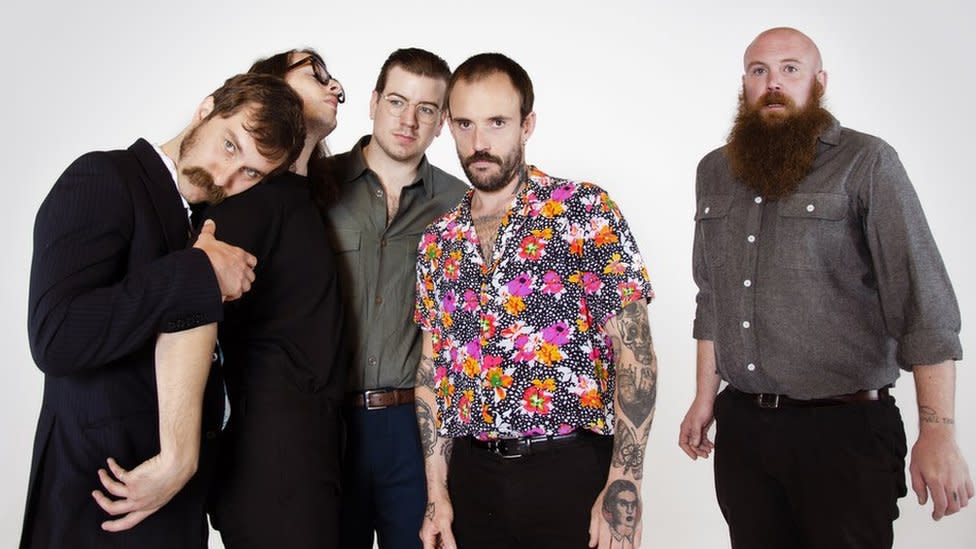