President Trump, hospitalized with COVID-19, received supplemental oxygen on Saturday — a previously undisclosed episode — and is being treated with a powerful steroid amid indications that his lungs may have suffered some damage, the White House physician said Sunday.

As questions continued about the severity of his illness and its progression, Trump late Sunday afternoon staged a motorcade drive-by outside Walter Reed National Military Medical Center and could be seen through the window of his massive black SUV, masked and waving to supporters who gathered outside.

The brief trip drew sharp criticism from medical experts who said Trump had endangered the Secret Service agents in the car with him.

Earlier, at a briefing in front of the hospital, doctors treating Trump continued to be upbeat about his condition. One of his physicians said the president could be discharged as soon as Monday, but another conceded they had not been fully forthcoming in their initial medical briefing Saturday.

Trump’s hospitalization, the most serious known medical episode involving the country’s chief executive since President Reagan was shot in 1981, has roiled the presidential race a month before the Nov. 3 election. It also represents a setback to the Trump campaign strategy of turning attention away from the pandemic that has killed nearly 210,000 Americans.

Former Vice President Joe Biden’s campaign announced Sunday evening that he had tested negative for the virus. Biden had a similarly negative test on Friday.

At Sunday’s briefing, the White House physician, Dr. Sean Conley, provided several significant new pieces of information about the 74-year-old president, saying that he had experienced a “high fever” Friday morning and had received supplemental oxygen for about an hour before being transported to the military hospital in suburban Bethesda, Md., later that day.

He disclosed that Trump’s oxygen level had fallen again on Saturday to the point that supplemental oxygen was again required, and that scans of his lungs showed some indications of damage, although he insisted they were not of “major clinical concern.”

Significantly, Conley said the president had been given dexamethasone, a steroid. Doctors prescribe that drug for COVID-19 patients to combat lung damage caused by inflammation, which is one of the major ways the disease can kill patients. Experts had said previously that a decision to put Trump on the drug would be a major development.

Conley had not answered a question Saturday about whether Trump had been given any steroid and had also evaded repeated questions about supplemental oxygen. On Sunday, he acknowledged that he had omitted some information at the earlier briefing, saying he was “trying to reflect the upbeat attitude” of Trump and his aides.

“It came off that we were trying to hide something,” he said, adding that had not been their intent. He continued to withhold some information, however, declining to say how low Trump’s oxygen level had dropped, for example. On Friday it fell “below 94%” but hadn’t hit “the low 80s,” he said.

In mild cases, he said, “we actually think it does more harm than good.”

On Sunday, Jha repeated that assessment, noting that it was unclear whether Trump could suffer long-term damage to his lungs. Some patients have breathing trouble even after their initial recovery, he noted.

Although doctors have only released incomplete information, Jha said it appears Trump has a moderate case of COVID-19.

“I don’t think he’s out of the woods yet. He could get worse,” Jha said. “And I think he needs very close monitoring.”

Like other steroids, dexamethasone can have significant side effects that could have an impact on Trump’s ability to work. Those can include irritability, mood swings and trouble sleeping, according to medical experts. By reducing fever and discomfort, it can also make patients feel temporarily better even if their illness and risk haven’t changed, Dr. Robert M. Wachter, head of the Department of Medicine at UC San Francisco, said on Twitter.

The National Institutes of Health recommends use of the drug for COVID-19 patients who need supplemental oxygen, but cautions against it in mild cases.

Despite the disclosure of more serious symptoms, the medical team said Trump was doing well on Sunday.

“Since we last spoke, the president has continued to improve,” Conley said, adding that the course of any illness has “ups and downs.”

Another of the medical team, Dr. Brian Garibaldi of Johns Hopkins University, said Trump was “up and around” and feeling well.

“Our hope is that we could plan for a discharge as early as tomorrow,” he said.

At the same time, however, the doctors said that Trump was only midway through a five-day course of remdesivir, an antiviral drug that medical experts have said would be more difficult to provide outside a hospital setting.

Jha said Sunday he was puzzled by the comment that Trump could be discharged quickly.

“This whole thing strikes me as very unusual. You would not have a normal person getting discharged at this moment,” he said. “Obviously they can do a lot for him out of the White House. But I find this strange, and not consistent with how this is typically managed.”

Trump, clearly eager to signal that his condition is improving, released a video on Twitter shortly before his brief trip outside the hospital in which he implied that his bout of illness was already behind him.

“I learned a lot about COVID — I learned it by really going to school,” Trump, clad in an open-collared white shirt and a suit jacket, said in the video. “This is the real school, this isn’t the ‘Let’s read a book’ school. And I get it.”

But his foray drew a furious online outpouring of criticism. James Phillips, a professor of emergency medicine at George Washington University Medical School and an attending physician at Walter Reed, who is not treating the president, called it “insanity.”

Phillips noted on Twitter that Trump’s armored limousine is designed to be sealed from outside air, concentrating any viral particles that might have passed through Trump’s mask. Everyone in the vehicle should now face a 14-day quarantine, he wrote.

“They might get sick. They may die. For political theater.”

Earlier Sunday, Trump’s national security advisor, Robert O’Brien, appearing on CBS’ “Face the Nation,” portrayed Trump as “firmly in control” of the government. He refused to discuss details of contingency plans if the president were incapacitated, but said “we’re prepared” for any scenario.

O’Brien, who recovered from a bout of COVID-19 over the summer — said he would expect the president to remain hospitalized “for at least another period of time,” adding that “day seven and eight are the critical days.”

The contradictory accounts by doctors and White House officials indicate how Trump, who often tries to mold facts to fit his preferred narrative, has extended that approach to his own medical care.

Asked why he wasn’t upfront Saturday about Trump receiving oxygen, Conley admitted that the omission was part of a public relations front.

“I was trying to reflect the upbeat attitude that the team, the president, that his course of illness had had,” Conley said. “I didn’t want to give any information that might steer the course of illness in another direction.”

The White House acknowledged that the awareness that Trump may be listening can affect how medical information is presented. Spokeswoman Alyssa Farah, asked by reporters about Conley’s concession that he had not been fully candid, said that “when you’re treating a patient, you want to project confidence, you want to lift their spirits. And that was the intent.”

Farah also said the White House would disclose the number of positive tests that personnel there have had. A few hours later, White House Press Secretary Kayleigh McEnany contradicted that, saying the numbers would not be released because of privacy concerns.

In addition to influencing what his doctors say, Trump has also attempted to inject some of his own medical advice into his care. On Saturday, Conley said the president had asked about whether he should take hydroxychloroquine, an antimalarial drug that has been touted among his allies and in conservative media despite no proof that it’s effective against the coronavirus.

House Speaker Nancy Pelosi (D-San Francisco), appearing on CBS, emphasized that “our prayers are with the president and the first lady,” who has also tested positive for the coronavirus, but suggested that senior Democrats were being left in the dark about the president’s condition.

“We’re getting our information the way everyone else is, in the media,” she said.

Without directly addressing the contradictory statements about Trump’s condition, Pelosi alluded to the president’s tendency to berate or undercut aides when their words, even if factual, displease him. The public, she said, should not be left with the impression that when Trump’s doctors give a briefing, “it has to be approved by the president. That’s not very scientific.”

The White House has also undertaken a less-than-robust effort to trace other people who might have been in contact with Trump and exposed to the virus. A number of people who were around the president over the previous week have said publicly that no one from the White House had reached out and urged they be tested.

The Trump campaign, however, sought to portray the president as having consistently been serious about public health protocols to fight the coronavirus — even though he has repeatedly denigrated mask-wearing, as recently as his Tuesday debate with Democratic rival Biden.

Campaign senior advisor Jason Miller, appearing on multiple news-talk shows, was peppered with questions about lax enforcement of government disease-prevention guidelines at the White House and at campaign events attended by Trump.

On ABC’s “This Week,” Miller accused Biden of using masks as a “prop.”

On NBC’s “Meet the Press,” he was asked why Trump did not self-isolate Wednesday after his close aide Hope Hicks tested positive for the virus, as Centers for Disease Control and Prevention guidelines call for in cases of known exposure.

“They take a lot of precautionary measures,” Miller said of Trump’s team.

Mon Oct 5 , 2020
ALEX EDELMAN/AFP via Getty Images President Donald Trump briefly left Walter Reed National Military Medical Center to wave at his supporters on Sunday, which was day 3 of his coronavirus hospitalization. Possibly concerned about optics and taking publicity matters into his own hands, Trump, who was wearing a black face […] 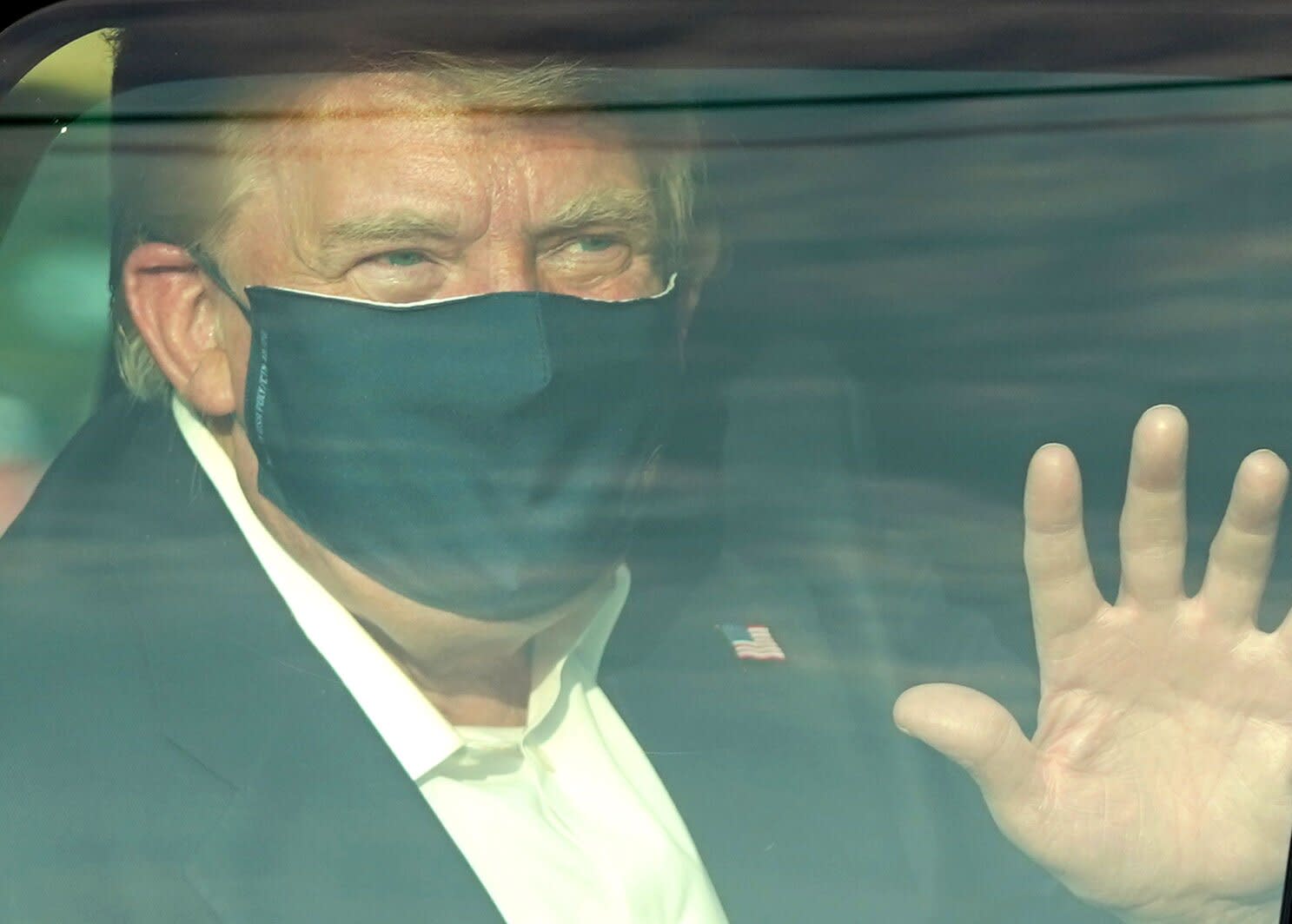