Stevie Carpenter dropped out of high school, earned his GED, enrolled at L.A. City College and at age 25 has been accepted to attend UC Davis this fall, where he plans to study neurobiology.

But the COVID-19 pandemic has thrown another major challenge at him: online classes. Carpenter couldn’t keep up with general chemistry, a requirement for his major.

“I couldn’t take chemistry without a teacher…. It’s difficult to just read a book and go off the examples,” he said.

Instead, he received an “excused” withdrawal, jeopardizing his admission to UC Davis and threatening his plans to become the first in his family of 10 children to attend a four-year university.

“Hopefully, I can take it again” at UC Davis, Carpenter said. “If not, I am going to have to apply for the following school year.”

Carpenter’s experience reflects the struggles of many students in the nation’s largest community college system during their final months of the academic year, and it portends further troubles as the Los Angeles Community College District will continue with primarily online instruction in the fall.

With nine colleges and an annual enrollment of more than 200,000, the district serves some of the most vulnerable students in the state’s systems of public higher education. An estimated 1 in 5 were homeless before the pandemic, and more than half were food insecure — circumstances exacerbated by the crisis.

District data show that online learning hindered the trajectory of many students. More than 32,000 students withdrew from classes in spring 2020, compared with about 27,000 in spring 2019 — a 17% increase. Roughly 2,000 students in “hard-to-convert classes”— including those in health fields such as nursing and biotechnology, and career and technical courses such as auto mechanics — are in educational limbo because their hands-on coursework could not continue, said Angela Echeverri, president of the college district’s Academic Senate.

Additionally, of more than 9,000 students who filled out a district survey in April about the online transition, only three-quarters said they had regular access to a computer, and just a slightly higher share said the same of internet access. One-third of students said they didn’t have a quiet study space. Almost half said they had dealt with job loss or reduction of hours, and 72% said they had increased worry or anxiety.

The killing of George Floyd in late May and the ensuing protests and police violence further traumatized students.

“Our students are trying to prepare for their upcoming final exams … while coping with many obstacles in a time of enormous social turbulence,” a June 1 letter from Echeverri, faculty guild President Joanne Waddell and district Chancellor Francisco Rodriguez to college faculty said.

The letter cited the district’s survey results and said the pandemic “has only exacerbated the inequities experienced by our students and communities.”

The district has tried to respond to these simultaneous crises, mobilizing to distribute close to 14,000 Chromebook laptops, giving out gift cards to grocery stores, providing flexibility to withdraw from courses or switch to a pass/no pass grade, and instructing faculty to give generous allowances to students whose personal circumstances impeded the completion of final exams or assignments.

“The hardest obstacle was getting the resources to attend class,” said Ha, who monitors an online platform and social media sites where students post questions. “And the students who do have resources, their obstacle is self-motivation.”

Ha said students inquired about laptops and low-cost internet service, the effect of withdrawals on their transcripts, their ability to complete lab courses and assistance for students with disabilities. He said he was lucky because he had saved up and bought a laptop in October, and will still transfer to UCLA as planned this fall.

Others had a harder time.

Michael Duggan, a formerly homeless student at City College, applied for a district-issued laptop the day the announcement came out. In April, for the first time, he sat down at his desk and typed out an essay.

But there were gaps. Duggan, who gets by on $200 a month in cash assistance from L.A. County and food stamps, couldn’t get to a printer to apply for an “Angeleno card” — financial assistance from the mayor’s office. And he still faces food insecurity.

“I really struggle day to day,” he said.

Elias Geronimo, a 30-year-old from Guatemala, spent years in adult school learning English and earning his high school diploma before enrolling at City College in 2017. He is studying biology with the goal of transferring to a four-year university in 2021 and, ultimately, attending medical school.

Geronimo, who shares expenses and a two-bedroom apartment in Lincoln Heights with his brother, sister-in-law and cousin, was laid off from his part-time job busing tables at a West Hollywood restaurant just before campus closed.

“Everything came up together and … blocked my mind from focusing on my education,” Geronimo said. “It was really difficult to deal with all those emotions.”

He received a Chromebook from the district and a $50 gift card to use at Ralphs or Food 4 Less, but he is still plowing through savings. Though he succeeded in Calculus 2, his Chromebook overheated during a chemistry final and he earned a C.

As for biology? Geronimo dropped it once he saw his grades slipping on online exams. “It’s my major and I want to pass that class with an A,” he said.

Plus, he doesn’t want to arrive at university having done only virtual labs. Geronimo hopes to retake biology with the in-person lab this fall. But if his college doesn’t offer it in person, he said, “I don’t have another choice but to take it” online.

The district is working out what to do with “hard-to-convert courses,” Echeverri said. In the spring, faculty members had the benefit of completing five weeks of in-person instruction, but they say they may not be able to make do with zero in the fall.

Each discipline is submitting requests for in-person hours, but the costs and logistical requirements of providing them in a safe way may be prohibitive, especially because the district is facing state budget cutbacks. Professors must prepare to offer alternatives — or have their classes bumped.

Even before the pandemic, online education was difficult. A 2015 review by the Public Policy Institute of California found that only 16% of online courses in California community colleges had pass rates of 70% or higher, compared with 44% of traditional classes.

Echeverri is particularly worried about students who will come to community college in the fall from the K-12 system.

“I worry that when those students come to us, they’re going to have certain academic deficiencies,” she said.

Students’ struggles with academics have been compounded by a lack of support services. Most faculty and students had some familiarity before the pandemic with Canvas, the online learning management system used by the community colleges, but the district had just begun to use Cranium Cafe, its online platform for student services such as counseling and tutoring.

Carpenter, the neurobiology student at City College, also worked as a math tutor in a program to help disadvantaged students. Before the pandemic, he said, his hours were always booked. After, only a couple of students signed up.

“Most of them didn’t know about [Cranium Cafe] or didn’t know how to navigate it,” he said.

Carpenter called the lack of counseling, tutoring and other supports “the downfall for students,” who rely on such services not only for practical help with meals and books but also for connection and mentorship.

Erika Miller, director of a support program at Southwest College for low-income, first-generation college students and those with disabilities, said many “feel at a loss.”

“A lot of our students aren’t sure if they even want to continue with their studies,” she said. “They keep saying over and over to us, ‘I’m not sure if I’m gonna make it.'”

Mon Jun 22 , 2020
The effects of COVID-19, which necessitate social distancing and nationwide stay-at-home orders, are evident even when it comes to press events. On Monday, Apple hosted its first-ever pre-recorded Worldwide Developers Conference (WWDC). The stream featured some snazzy camera work, and updates to both Apple software and hardware from CEO Tim […] 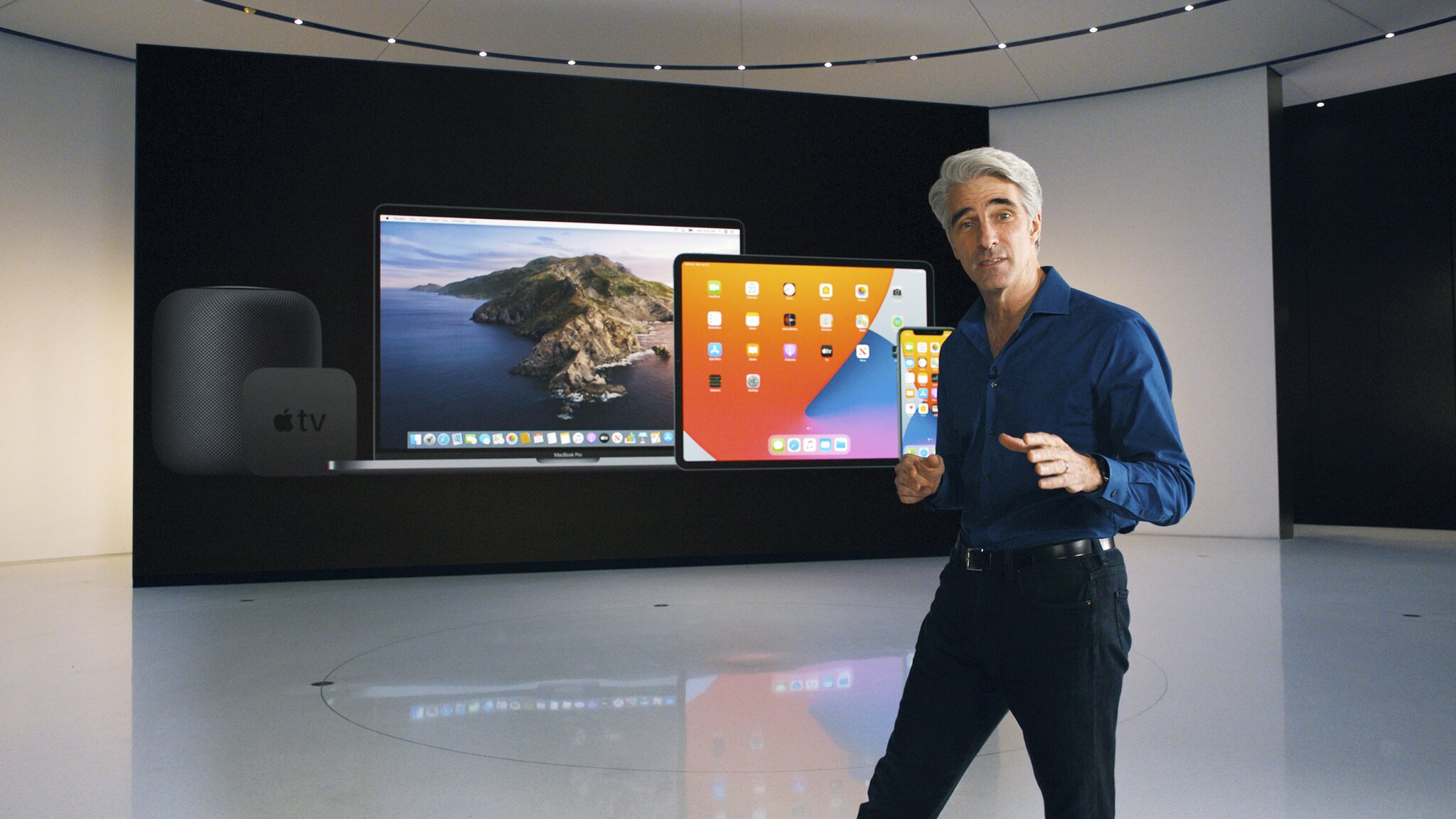