Family situation: My daughter Faith and I live just outside of Waco. We have one adorable dog Pixie and two fish named Gwyn and Gabe. Parenting “philosophy” in a sentence: Parenting takes a lot of patience, prayer and organization. I always knew I wanted to be a mommy. I was […]

Family situation: My daughter Faith and I live just outside of Waco. We have one adorable dog Pixie and two fish named Gwyn and Gabe.

Parenting “philosophy” in a sentence: Parenting takes a lot of patience, prayer and organization.

I always knew I wanted to be a mommy. I was raised in a very traditional family in Texas, but I got married a little later in life and didn’t have my daughter Faith until I was almost 40. Being pregnant as an older mother, there were a lot of things I worried about but muscular diseases were nowhere on my radar.

When Faith’s dad and I found out that I was pregnant, I had to do a series of tests to make sure things were okay. Despite our older ages and family history, we found out her heartbeat was perfect and genetically, everything was great. We let out a huge sigh of relief. I had a great pregnancy and when Faith was born, she came out 10 fingers, 10 toes — everything. We both felt so blessed. It wasn’t until about 10 or 11 months down the road that we realized something felt off. Our daughter was way ahead cognitively but way behind physically. At 17 months, Faith was diagnosed with Spinal Muscular Atrophy (SMA) and our whole world changed overnight.

When we found out, we didn’t get out of bed for three days. Faith’s daddy has two other children who are very healthy, athletic and play sports so we thought, How are we going to do this? We cried and cried and then on the third day, I said, “Okay, this is enough.” I’m a fixer. I’m a planner. I’m not a depressed person so even though I knew nothing about SMA at the time, I was determined to figure things out.

I remember Googling and Cure SMA came up, so I registered with them. In two days, they sent me a care package with blankets and toys. I also joined the Muscular Dystrophy Association Facebook page and started looking at their research. I started seeing that there were treatments and drugs in the pipeline, but they were a few years out for FDA approval. That gave us some hope. Thank goodness for social media because within 24 hours, I had found SMA support groups online. One mom who lived an hour-and-a-half down the road messaged me out of the blue one day and said, “Hey, I see we have mutual friends from college. Let’s get together for lunch.” She told me her son was SMA type two and that she could tell me what to do.

I drove to meet her and her husband at a diner with Faith’s daddy and we sat at that restaurant for four hours, and we just cried. She told us everything — this is the type of van you need, you need a respiratory therapist, you need a pulmonologist. She made me a little flow chart and told me everything. She became my best friend for six months while we tried to navigate this new journey. I also began to connect with other moms around the world through Facebook groups. Without those connections, I don’t know what we would’ve done.

Two months after Faith’s diagnosis, we went to an SMA picnic in Austin and met a ton of people. It was there we met a little girl from Houston named Savannah Norton. She was the first little girl we had met with SMA. Four weeks later, we found out she had died. That’s when we realized okay, this is real.

Faith has accepted her disease beautifully. She’s never let it bother her and has never complained. Every once in a while she’ll say, “Gosh, I wish I could walk,” or, “Man, I wish I could do that,” but she doesn’t get upset. I’ve told her, “We don’t know why you were blessed with this disease but you’ve used it for good and you’ve done things that these kids who are running wild will never dream of doing.”

Now that she’s getting older, she’s started to ask things like, “When you die, who’s going to take care of me?” She’s starting to become aware of her body and wonders things like, “Will I have kids?”

As a parent, I’m trying to pull back from doing so much for her because I want her to be independent. I want her to go off to college and feel prepared. I’m also not someone who asks for help so if there’s anything good that’s come out of quarantining, it’s that I had an emergency surgery when summer first started and I had to learn how to rely on others.

I had my gallbladder removed and couldn’t lift Faith for six weeks. I had to have others come into my home and help her in the bathroom and bathe her. It was ultimately a blessing because it showed me that other people can take care of her and she is able to adjust to new people. I had to get used to giving up the reins a bit, which in the end was a good thing.

We’re hoping at 18, when she goes off to college, Faith will be able to adjust just as well. I’ve always been so worried about what it would be like for other people to be so intimate with her in a bathroom setting, but she’s just a beautiful child and she constantly adjusts. Wherever we go — if it’s a wedding or a funeral — she adjusts. She’s very flexible and I think having SMA has made her that way because every day is different. She never knows what to expect. I know when the time comes and her friends are getting their driver’s licenses or going to prom, she’ll be able to adjust because her heart is so big.

How did your upbringing influence your parenting style?

I was raised in a very traditional Southern Baptist family. Faith’s daddy and I are divorced, and have been for about a year. No one in my family is divorced and all the women in my family are stay-at-home moms. All the dads work, and so I like to say that I grew up in a kind of June Cleaver world.

When our lives were rocked with SMA, as well as a broken marriage, it was so different than what I was used to because it was so far from how I was raised. Thankfully, growing up with a strong mama, grandmother and aunt helped me overcome a lot. My mother is a Christian and raised me in church. She raised me with faith and I don’t know how we would’ve gotten through certain things without relying on Him.

I have a very strong family that’s always there for me. If we’re in the hospital, I have 20 people there in the waiting room with me, praying for us, bringing us food. My home is not like the home that I grew up in and it makes my heart sad, but that’s life. I grew up in a pretty perfect world and I don’t have that perfect world now, but I’m glad that I had that foundation because it made me strong.

What’s your favorite thing about parenting?

My favorite thing is knowing how much my daughter loves me. I love the way she relies on me and the way she looks at me. On the weekends, she gets to sleep in my bed so every week she starts to countdown the days until it’s our night to snuggle. It’s our little tradition.

Faith is my one constant in life. Jobs change, friends and neighbors come and go, but she’s my little hero and partner. She’s my forever companion.

How do you keep Faith active and full of imagination?

I’ve had to be more creative this summer because we can’t go anywhere. Our vacation was canceled and camps were canceled. We’ve learned to cook but the main thing that she’s been enjoying is having FaceTime dates with friends. A couple of weeks ago, she was like, “Mom, I’m going to organize a FaceTime party.” I was like, “What does that mean?”

She basically sent out an invite to about 12 friends and once I was done with cooking in the kitchen, I came out of the room and she had a disco light plugged in. She had karaoke playing and these 12 little girls were sitting in their little squares watching her sing and dance. She was asking them for requests, and just partying on FaceTime.

The hardest part is probably trying to stay consistent as a disciplinarian. I’ve taught for 25 years and I can think of so many behaviors in students that I don’t want my kid to have, so I’m constantly on her. I’m constantly correcting her, and reminding her that in Texas, we say, “Yes ma’am, no ma’am, please and thank you.”

Being a disciplinarian and following through is difficult because as a single mom, I don’t have another person backing me up. She’s getting older and sassier, so I like to remind her that she’s still eight and not 16. She’s still a little girl.

What’s the best advice you can share with new parents?

Try not to have any expectations. You have no idea what kind of child you’re going to have when you bring a little one into your home, whether through natural birth, adoption, foster care, whatever. Every day you’ll have to just get up and figure it out. Be thankful for what the Lord gave you and your child, then find your strength and run with it.

What would you want your daughter to say about you as a parent?

Mother, 52, reveals how she overcame a 25 year addiction to prescription painkillers

Wed Aug 5 , 2020
Nicki Hari took up to 20 painkillers a day at the height of her addiction. (Supplied) A mother has revealed how she overcame an addiction to painkillers that spanned a quarter of a century. Nicki Hari, 52, from Hertfordshire, was first prescribed paracetamol and ibuprofen for persistent knee pain when […] 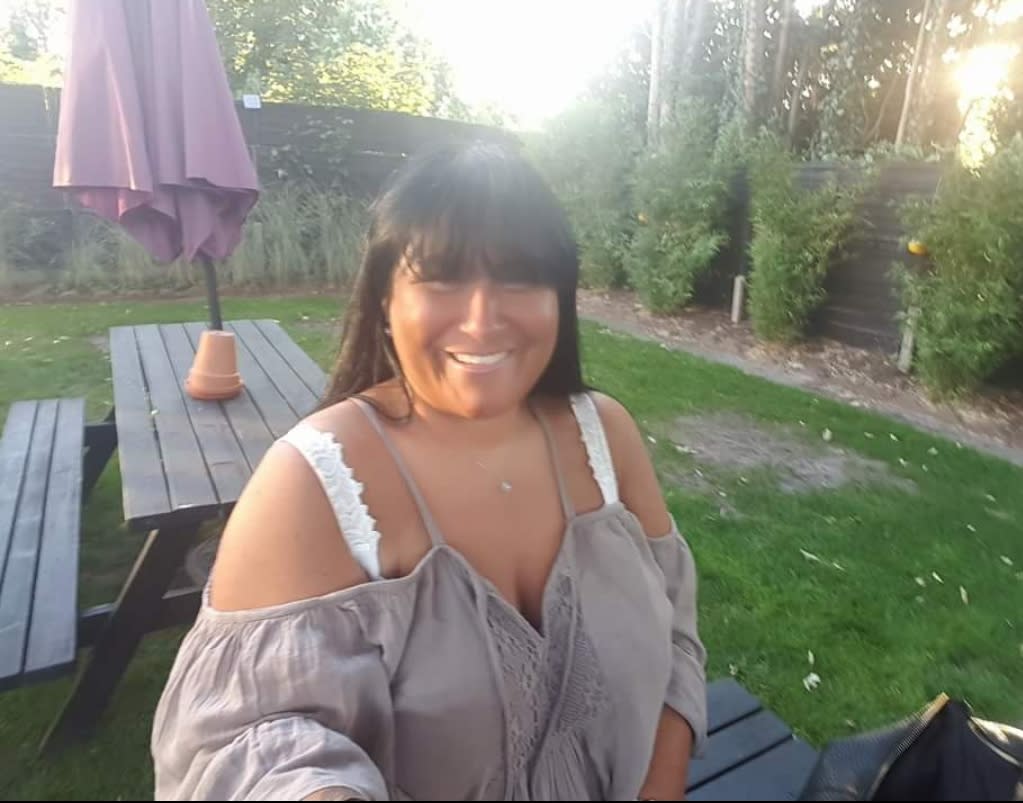