Once again, we shine the spotlight on subpar spelling and grammar, lifted directly from the pages of Facebook and other social media sites. As always, some of these will make you laugh. Others might make you cry.

Even though Deputy Barney Fife constantly told Andy he would “nip it in the bud,” some folks didn’t hear him clearly. They would rather “nick it in the butt.”

In a political argument, someone wrote that certain people “get their fillings hurt.” Especially if they go to the wrong dentist.

Another wrote that one politician’s decision is bad “not just for Tennessee, but the nation as a hole.” Yes, you certainly don’t want the nation in a hole.

Still another complained about “a Miss Use of tax dollars.” I don’t believe I have met her, but I know her friends, Miss Understanding and Miss Communication.

One political figure was referred to as a “bafoon.” I don’t think that was a compliment. Even buffoons would agree with that.

About a candidate’s speech, one Facebook critic called it “a load of carp.” And he wasn’t even at the pond.

In the “I’ll spell it like I hear it” file, I’ve learned that a person who turns his back on his country is no longer considered a traitor. Now, many people describe him as a trader.

One retiring politician was sent on his way with this note: “Don’t let the door hit you in the but.” But…but…what? The critic continued, “My president is draining the swap.” (If that’s the case, I guess he’s not a trader.)

Insults constantly fly on social media. It is not uncommon for one person to call another a “looser.” Evidently they need to tighten up.

During our recent winter cold snap, the weather forecasters were talking about the wind chill factor. Some folks called it the “windshield” factor. I guess that makes sense. Maybe that has to do with the amount of ice you’ll be scraping.

After local school officials decided to close early one day due to impending bad weather, some Facebook critics were not happy. One wrote, “We need a new super attendant!”

Football was on the mind of one fan, commenting on a coach’s announcement about a lineup change for this fall. “We don’t need a new quarterback,” he wrote. “What we really need is a new couch!” (And while you’re at it, a whole new living room suite.)

After returning from vacation, one commenter wrote, “It rained all the time, so we had to stay in our hotel sweet.” Maybe they had lots of chocolates.

One complaint about an area restaurant mentioned a menu item called an “egg role.” No word on who played the role of the egg.

Another person wrote about attending a movie. “I hardly ever go to the movies,” a friend replied. “Prices are too high at the concussion stand.” That sounds painful, too.

Speaking of food, one Facebook writer said she was on a diet. “I need to curve my appetite,” she wrote. (Actually, that may be what got her in trouble in the first place.)

An invitation to a birthday gathering stated, “He would be honored by your presents.” I’ll bet he would!

One concerned citizen wrote about the need for a “bum shelter.” That’s what my wife calls the room where I watch ball games.

Commenting on a mugshot photo, one man wrote, “No wonder. He looks like a drug attic.”

Of course, it isn’t just an online issue. Outdoor signs can be entertaining too. One fast-food place has a sign that says, “Mangers needed.” Since it was in February, I don’t think this was a Christmas season request.

One popular drive-thru place was offering a real deal according to this sign: “Half-price snakes on Thursday!” Half-price isn’t low enough. You’d have to pay me big bucks to get near one of those!

Another eatery sign offered an apology for some construction going on. It said, “Please bare with us.” Hmmm, what kind of place IS this?

Punctuation used to be required. Now, it’s apparently optional. Like the sign on a door inside a restaurant, which said, “Sorry Employees Only.” I guess the good employees were not allowed to enter that room.

I have a feeling this won’t be my final list of spelling fails and grammatical glitches. Until next time, just grin and bare it, and above all, take it with a grain assault.

(David Carroll is a Chattanooga, TN news anchor. His upcoming book “Hello Chattanooga!” will soon be available on his website ChattanoogaRadioTV.com. You may contact him at 900 Whitehall Road, Chattanooga, TN 37405, or at [email protected])

Tue Feb 23 , 2021
Oregon quietly reached a monumental milestone last week in the fight against COVID-19. First doses of the vaccine for COVID-19 have reached almost every nursing home, assisted living and memory care facility in the state, according to the pharmacies distributing it. But it’s still hard to evaluate how successful the […] 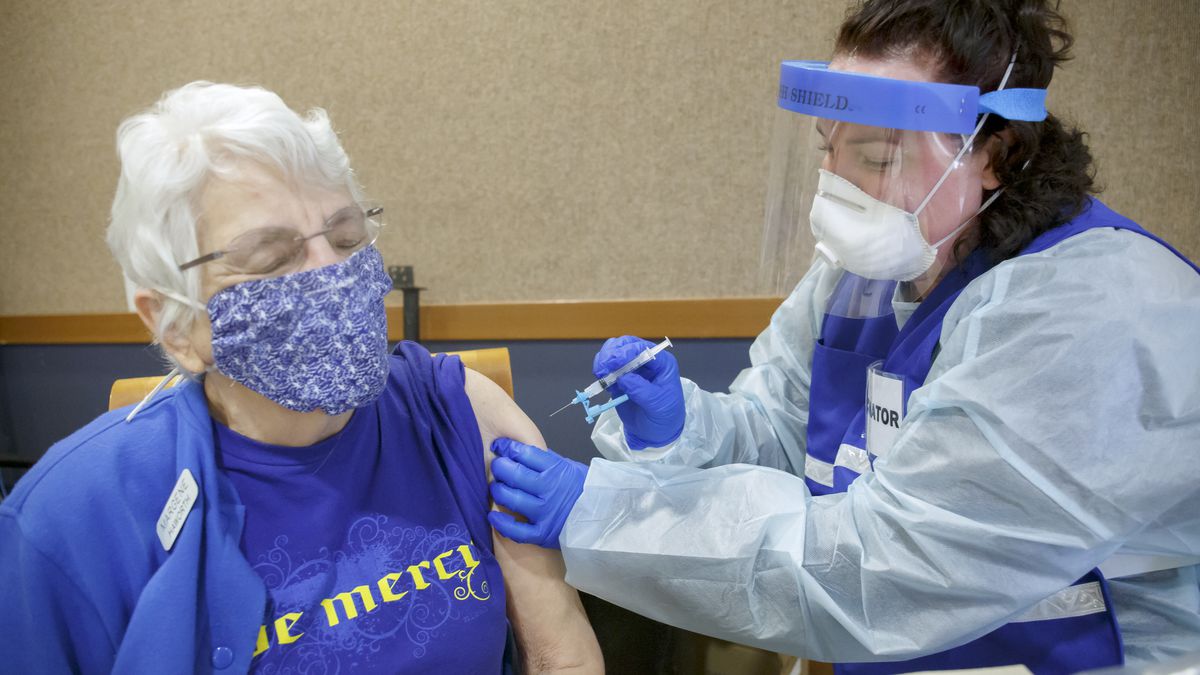