As the Trump administration races to buy hundreds of millions of syringes for what is likely to be an unprecedented COVID-19 immunization campaign, success depends heavily on two small medical supply companies with little track record of fulfilling government orders of that magnitude.

Retractable Technologies Inc., based in Little Elm, Texas, announced an $83.8-million government contract in May to provide an undisclosed number of syringes and needles for use with a COVID-19 vaccine. In dollar terms, the single order is double the company’s entire 2019 revenue, according to filings with the Securities and Exchange Commission.

Company officials recently warned of possible COVID-19-related supply disruptions due to the fact that 83% of Retractable’s products are made in China, but they also have told shareholders they are confident they can fill the large order.

The publicly traded company, which has been trying for years to become a bigger player in the syringe market, saw its stock price more than double after the order became public.

A second order — for $27.4 million worth of syringes and needles, with an option to go up to $54 million — went to privately held Marathon Medical Corp., an Aurora, Colo.-based medical distribution company that has no factories of its own and acts largely as a middleman.

Founded by a disabled Vietnam War veteran, Marathon has a long track record of filling substantial purchasing agreements with the Department of Veterans Affairs and other agencies. But before the pandemic, the company, which has 29 employees, had never been tasked with filling a federal contract larger than $3.1 million, according to a review of federal contract data.

Although the scientific race to develop a vaccine gets the most public attention, the massive orders for syringes illustrate how many less-glamorous steps the government needs to get right in order to carry out a vaccination campaign.

After the nationwide scramble for ventilators and personal protective equipment earlier this year, healthcare professionals, supply chain experts and government officials warned that the next critical shortage could be syringes, needles and other equipment needed to administer a COVID-19 vaccine to about 320 million Americans.

Vaccinating that many people could mean the U.S. would need up to 850 million syringes in 2021 to cover an expected COVID-19 vaccine — which could require two doses — plus the usual annual demand for syringes used for flu shots, insulin and other treatments. Under pre-pandemic capacity, that could take two years to produce.

Democrats on Capitol Hill are pressuring the administration to put together plans for vaccine distribution and to make those plans public. Last month, a bipartisan group of lawmakers led by Rep. Josh Gottheimer (D-N.J.) demanded that any future coronavirus bill include money to address the feared shortage of needles and syringes.

“I am extremely concerned that, even under the best-case scenario where there is a vaccine ready far quicker than ever before, our federal government is not taking the steps it needs to in order to ensure mass production and availability,” Rep. Rosa DeLauro (D-Conn.), who leads the House subcommittee that funds the Department of Health and Human Services, told The Times in a statement.

Last week, Republicans on the House Committee on Energy and Commerce released a report that urged the administration to study what could be done in the short term to address manufacturing capacity for syringes and other vaccine-related products that could face a shortage.

The government orders for Retractable and Marathon, signed May 1, are for a combined 320 million syringes and needles by April 30, 2021. The orders were made under the Defense Production Act, requiring the companies to prioritize the government’s needs.

Irwin Redlener, a Columbia University professor who has developed programs to help public health departments prepare for disasters, says he’s concerned that Retractable and Marathon could prove to be “grossly inadequate” to respond to the challenges ahead.

He pointed to what he called the “very insufficient-looking manufacturing and distribution capacities” of the two firms.

Health and Human Services said in a statement that the Marathon and Retractable proposals were both “deemed acceptable to meet the stated delivery requirements.”

Until last week, some industry experts had noted the absence of the nation’s leading syringe manufacturer, Becton, Dickinson and Co., or BD, from the government’s campaign. They worried that the administration might not be moving quickly enough to secure additional contracts, since the U.S. is already competing against other nations that are similarly ramping up for a vaccine.

Health and Human Services alleviated some of that concern last week with an additional $18-million contract for 50 million syringes from BD by December.

And on Wednesday, BD announced a long-term agreement with the government to develop new production lines at its plants in Nebraska, giving HHS first rights to syringe and needle production during a crisis. That production is not expected to begin until next July.

Also Wednesday, Retractable announced that the federal government was providing the company $53.7 million in additional funding to expand its domestic production of needles and syringes. Under the deal, the government will fund the company’s facilities and upkeep for a decade. The company did not say when that production would come online.

The Trump administration has taken additional steps to shore up supply. It issued a $138-million contract to ApiJect Systems America to quickly build supply lines at existing facilities, with a goal of producing 30 million pre-filled syringes each month, once a vaccine is developed.

In late May, federal officials put out an additional call for even more needles and syringes. HHS said it wanted to acquire 500 million needles and syringes within a year, “with as many as possible” by the end of the year, according to the call for proposals. Proposals were due June 9, but the request acknowledged that funding was not yet available.

Retractable said in recent SEC filings that it expected to increase domestic and foreign production and hire additional employees.

“We certainly believe we have the capacity to fill that order,” Retractable founder Thomas J. Shaw said in a June 22 investor call. Shaw controls more than half the company’s shares.

Company officials did not respond to phone calls or answer emailed questions about the contract and their business.

Brad Leonard, managing member of BML Capital Management, which reportedly owns 5% of Retractable’s shares, noted that Retractable quickly and successfully filled a government order worth about $10 million during the H1N1 pandemic in 2009.

Even so, Retractable officials have acknowledged that they are facing new challenges due to the COVID-19 pandemic.

Retractable executives wrote in a recent SEC filing that the company experienced a temporary disruption in its supply of products from China when the new coronavirus first struck but said, “[W]e believe we have sufficient inventory to fulfill demand.” The company warned, however, that the situation was “fluid” and presented “challenges and uncertainties.”

On April 17, as the U.S. economy was reeling from coronavirus-related shutdowns, Retractable obtained a $1.4-million loan under the Small Business Administration’s Paycheck Protection Program, created by Congress to help struggling companies meet payroll and avoid layoffs.

Many trade experts, including several Trump administration officials, have been pushing U.S. medical supply companies to reduce their reliance on China, preferring to bring more manufacturing home and warning that China might seize vital products manufactured within its borders.

“What if that contract manufacturer doesn’t honor the contract because they have a higher-paying buyer somewhere?” asked Prashant Yadav, a senior fellow at the Center for Global Development who previously worked on supply chain issues at the Bill & Melinda Gates Foundation. “Or they have state pressure from China to supply” that nation instead?

Retractable has said that if it is unable to purchase products from its Chinese manufacturers, it will have to find alternative manufacturers or increase its domestic production.

“It is a large undertaking for them,” said Chaun Powell, who leads disaster preparedness planning and studies supply chain services for Premier Inc., a hospital group-purchasing organization.

Marathon, founded in 2002 by John St. Leger, is a longtime supplier for federal purchasing orders, particularly for Veterans Affairs hospitals.

Because the Defense Production Act was added to the contract, the government’s order gets first dibs on any syringes that Marathon can get hold of. But because Marathon doesn’t have its own factories, it can’t speed up production itself.

Marathon’s lack of production has raised issues in the past. Weeks into the pandemic, the VA opted to work around a 2018 contract with Marathon to provide ventilators, concluding that the government could get the machines faster and cheaper by dealing directly with the manufacturer, Covidien, also known as Medtronic.

Executives at Marathon did not respond to phone calls and emailed questions.

HHS initially set up four-year contracts in 2018 with both Retractable and Marathon to supply products to the Strategic National Stockpile, the country’s warehouse of medical supplies for health crises.

Included in those contracts were options to dramatically expand the government’s order in case of an emergency, potentially increasing the value of the contracts from as little as $25,000 to as much as $85 million, according to the 2018 request for proposals. When COVID-19 struck, HHS moved to scale up its orders under those existing contracts.

“Whoa. That’s a pretty big surge,” said Sandor Boyson, a University of Maryland professor and supply chain expert. He said such a range in demand could present capacity challenges for smaller companies.

The contracts were set up in response to a shortfall identified during the H1N1 flu crisis in 2009. At that time, the federal government had no existing relationship with syringe suppliers and had to scramble to find manufacturers, according to one former employee of HHS responsible for responding to the flu pandemic.

Retractable and Marathon won the bid, beating one other unidentified company.

The final tally of how many syringes will be needed for the COVID-19 vaccination campaign will depend in part on the nature of the vaccine. It is widely expected that an injectable vaccine may need to be delivered twice. But alternative delivery methods — such as nasal sprays, oral consumption or patches — could reduce the need for syringes.

Under questioning from lawmakers at a June 9 hearing, Rear Adm. John Polowczyk, who is leading the Federal Emergency Management Agency’s Supply Chain Stabilization Task Force, said the federal government expected to have about 400 million syringes ready by the winter and a total of 700 million ready by next year.

White House trade advisor Peter Navarro had warned in a memo in February that the administration should begin buying and stockpiling syringes and other vaccine-related products.

“We may find ourselves,” he wrote, “in a situation where we have enough vaccine — but no way to deliver all of it.”

A Q&A with Michael V. Drake

Wed Jul 8 , 2020
The University of California announced its new president, Dr. Michael V. Drake, on Tuesday. Drake, will oversee 10 campuses, five medical centers, three national laboratories and a nearly $40 billion operation. History was made, as Drake is the first person of color to serve in this role. He replaces the […] 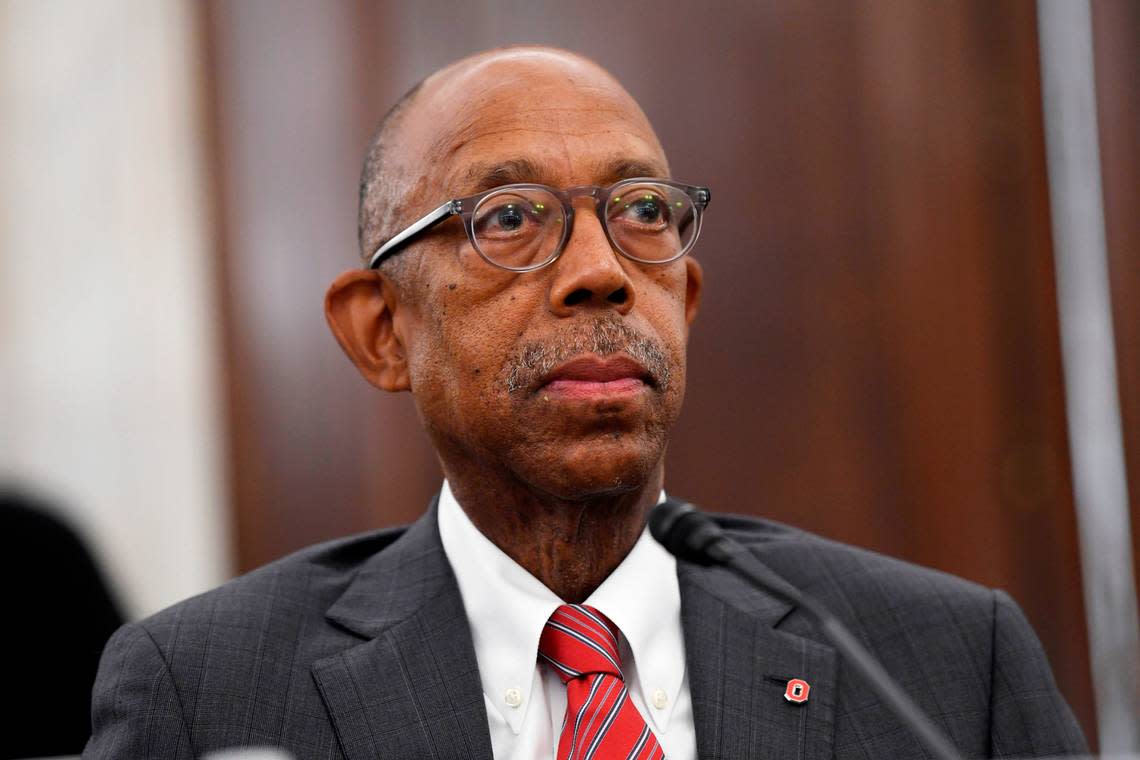