While scientists around the world rush to find a vaccine for COVID-19, researchers in San Francisco developed an antiviral nasal spray that could fight the coronavirus.

Coronavirus infections have spiked in Texas as the state surpassed the 500,000 case marker Tuesday. While state hospitalizations have decreased, Gov. Greg Abbott said gatherings may have contributed to the surge in positive cases.

In college sports, the Pac-12 postponed its season Tuesday, hours after the Big Ten announced it would not play football this fall over concerns of the coronavirus. The historic decision may lead the rest of the Power Five conferences to delay their seasons.

Here are some significant developments:

📈 Today’s numbers: Wisconsin has reported its 1,000th death. New weekly case records were set in Indiana and North Dakota, and also Guam and Puerto Rico. Weekly record numbers of deaths were reported in Georgia and Tennessee, and also Puerto Rico. The United States has reported more than 5 million cases and nearly 165,000 deaths. Worldwide, there have been almost 750,000 deaths and more than 20 million cases.

📰 What we’re reading: Outdoor dining may save restaurants during the COVID-19 pandemic. But are diners at risk from cars plowing into them?

The first North Carolina dog to tested positive for coronavirus has died, state health officials said. The Department of Health and Human Services said the 8-year-old male Newfoundland was taken to state Veterinary Hospital on Aug. 3 after showing signs of respiratory distress and died later that day. An autopsy was planned to determine if the infection was the cause of death. The first dog to test positive in the United States was Buddy, a 7-year-old German shepherd from Staten Island, New York, according to National Geographic. Buddy died July 11.

“Based on the information available, the risk of animals spreading the virus to people is considered to be low,” said a statement from Dr. Carl Williams, a North Carolina public health veterinarian.

The Pac-12 has decided to not play its football season this fall over concerns that the sport carries too much risk for athletes, the conference said Tuesday, joining the Big Ten as the second member of the Power Five to elect not to play over the health issues raised by the coronavirus pandemic. Combined, the announcement by the two leagues less than two hours apart foreshadow a series of similar moves that may eventually lead to the cancellation of the entire Bowl Subdivision season.

“The health, safety and well-being of our student-athletes and all those connected to Pac-12 sports has been our number one priority since the start of this current crisis,” said Pac-12 Commissioner Larry Scott.

“Our student-athletes, fans, staff and all those who love college sports would like to have seen the season played this calendar year as originally planned, and we know how disappointing this is.”

All Pac-12 sports competitions will be postponed until at least Jan. 1, the league said. The decision came following a meeting of the Pac-12 CEO Group.

Researchers at the University of California, San Francisco, say they have created a nasal spray that can help ward off the coronavirus – not as a cure or vaccine, but as an antiviral.

“Far more effective than wearable forms of personal protective equipment, we think of AeroNabs as a molecular form of PPE that could serve as an important stopgap until vaccines provide a more permanent solution to COVID-19,” said AeroNabs co-inventor Peter Walter, professor of biochemistry and biophysics at UCSF, in a news release.

Nanobodies in the spray are smaller than human antibodies, making them easier to manipulate in a laboratory setting, said co-inventor Aashish Manglik, MD, PhD, an assistant professor of pharmaceutical chemistry. Nanobodies, for this reason, are therefore less expensive and easier to mass produce. The researchers are currently working to get the spray manufactured and clinically tested.

US immigration services to furlough two-thirds of its workers

The federal agency tasked with offering citizenship, green cards and visas to immigrants is planning to furlough about two-thirds of its workers at the end of the month after Congress failed to reach a deal on a coronavirus stimulus package. U.S. Citizenship and Immigration Services notified about 13,400 of its 20,000 employees they would be furloughed Aug. 30 due to budget shortfalls, which the agency hoped Congress would fill in its next relief package before negotiations stalled last week.

“In the past few months, USCIS has taken action to avert a fiscal crisis, including limiting spending to salary and mission-critical activities,” an agency spokesperson said. “Without congressional intervention, USCIS will have to take drastic actions to keep the agency solvent.”

The agency had asked Congress for $1.2 billion and the funds were expected to come through its next coroanvirus relief package. But after about two weeks of negotiations, talks dissolved with Democrats and the White House blaming one another for the stalemate.

The coronavirus pandemic has canceled many things, but FOMO doesn’t appear to be one of them. Jennifer Wolkin, a New York-based health and neuropsychologist, describes FOMO, aka the “fear of missing out,” as “anxiety that’s elicited by the perception that others are thriving while we aren’t, or that others are overall experiencing a better version of life.”

In other words, you know that sinking feeling you get when you see other people on vacation while you’re sitting at home? That’s FOMO. But with travel plans nixed, large gatherings canceled and many stuck in quarantine, is 2020 a year of less FOMO? The fear of missing out is alive and well in lockdown, according to Wolkin and other mental health experts.

“It’s shape-shifted,” she says. “It might not be looking at pictures of someone’s vacation or their parasailing trip or swimming with dolphins. It now becomes ‘They’re making sourdough starters,’ and ‘They’re going for a hike in these woods with their family, and I’m just on the couch and doing nothing and surviving and trying to find my breath.'”

Clorox said it’s churning out more disinfectant wipes than ever before to keep up with increasing demand during the pandemic. The company’s president, Linda Rendle, said Clorox it is “making wipes in record numbers and shipping to stores in record numbers” as consumers continue to scour grocery store aisles for Clorox and Lysol products, which health agencies say may help curb the spread of COVID-19.

Clorox Disinfectant Wipes have not been tested on the novel coronavirus that causes COVID-19, according to the Environmental Protection Agency. But the wipes are “expected to be effective against COVID-19 based on data for harder-to-kill viruses.”

Southwest removes family after autistic son, 3, would not wear mask

A Texas woman says she was removed from a Southwest Airlines flight Monday after her three-year-old son with autism would not wear a face mask, a violation of the airline’s COVID-19 policy. Houston resident Alyssa Sadler says her Southwest flight from Midland, Texas to Houston returned to the gate when her son refused to wear the mask. Her family, including her one-year-old daughter, was asked to exit the plane.

“When you get kicked off your flight because your 3 year old autistic child won’t wear a mask,” Sadler wrote on Facebook. “Looks like I’m stuck here in midland.” Sadler told KPRC-TV her son has a sensory processing disorder and does not like to have his face touched. She said she had a note from the boy’s doctor about his condition. Southwest Airlines’ COVID-19 policy, enacted in July, states that all passengers over age two must have proper face coverings while traveling. The rule is pointed out during the online booking, in a pre-trip e-mail and during the check-in process.

3 COVID-19 deaths tied to Florida school before it reopens

The mother of Jordan Byrd, a 19-year-old custodian at a Tallahassee school who died of COVID-19, has herself died of the virus, further raising concerns about the state-mandated reopening of districts school’s this month. Jacqueline Byrd, a former Fort Braden School employee, died Monday morning, according to loved ones. Her surviving son, Jacary Byrd, paid tribute to his late brother, Jordan Byrd, and his mom on Facebook. “To my heart I will definitely miss you‼️” he wrote. “You and Jordan Byrd have both left me. I know that you both are having a good time in the Lord. Mommy I will definitely miss you.”

Texas surpassed 500,000 confirmed coronavirus cases Tuesday as Gov. Greg Abbott suggested family and neighborhood gatherings are behind a sharp rise in the rate of positive tests, which has climbed to record levels just as schools are beginning to reopen across the state. He also continued to say more testing in Texas is likely after dropping off in recent weeks, a trend seen across the U.S. even as deaths mount. Texas has reported more than 1,400 new deaths over the past week, including 220 on Tuesday.

Although health officials say there are encouraging signs in Texas — particularly hospitalization levels that have dropped more than 30% since July’s peak — infection rates have been increasing steadily. On Tuesday, the rolling average of positive cases over the past seven days jumped to 24%, by far the highest of the pandemic, according to figures from the state Department of Health Services.

“There’s a reason why this is happening, I believe, and that is some people feel if they’re just with family members” they can let their guard down, Abbott told reporters in Victoria, which had a surge of cases in July. “And that turns out not to be the case.”

On Facebook: There’s still a lot unknown about the coronavirus. But what we do know, we’re sharing with you. Join our Facebook group, Coronavirus Watch, to receive daily updates in your feed and chat with others in the community about COVID-19.

In your inbox: Stay up-to-date with the latest news on the coronavirus pandemic from the USA TODAY Network. Sign up for the daily Coronavirus Watch newsletter here.

Tips for coping: Every Saturday and Tuesday we’ll be in your inbox, offering you a virtual hug and a little bit of solace in these difficult times. Sign up for Staying Apart, Together here.

Hotels, airlines and sports venues turn to Clorox and Lysol to vouch for their cleanliness

Wed Aug 12 , 2020
If you jump on a United Airlines flight, you are likely to see the Clorox logo on signs and posters as you board. Check into a Marriott or Hyatt hotel and expect to see stickers emblazoned with the name of the Global Biorisk Advisory Council, an arm of the world’s […] 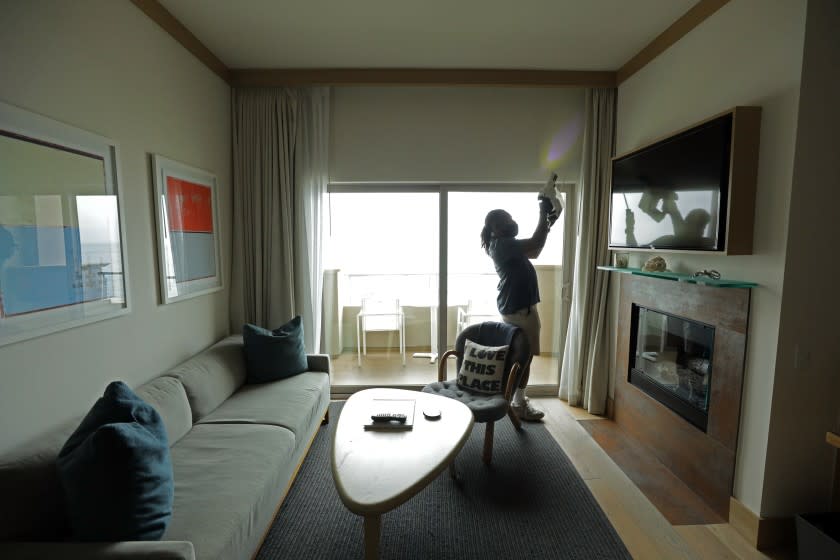