Guests check out giant pumpkins during the West Virginia Pumpkin
Festival in Milton in 2017.


Machinist and giant pumpkin-grower Justin Conner planned to make
another try for the biggest pumpkin at the West Virginia Pumpkin
Festival this year, but the festival was canceled because of the
coronavirus pandemic. Furthermore, the rain caused this year’s
pumpkin to split.


Although the West Virginia Pumpkin Festival in Milton was
canceled this year due to the coronavirus pandemic, pumpkins are
available from local vendors and at farmers markets.

Justin Conner poses with his 2019 ribbon-winning pumpkin. The
giant pumpkins take a lot of work to grow, but Conner said it’s
rewarding just to watch them practically grow before your eyes.

Not to knock the achievement of growing West Virginia’s largest
green squash, Chris Rodebaugh said having the biggest pumpkin is
the Super Bowl of giant produce.

Visitors check out Bob Cyrus’ 1,583-pound pumpkin at the West
Virginia Pumpkin Festival in Milton in 2018.

CHARLESTON — Leaves are falling and the air is getting cooler, but the festivities of fall have been muffled, if not entirely muted.

The wave of fair and festival cancellations caused by the coronavirus pandemic has continued past the summer. There was no Forest Festival in Elkins, no Black Walnut Festival in Spencer and the West Virginia Pumpkin Festival in Milton was canceled.

Over the phone, Cindy Hinkle, the Pumpkin Festival president, sighed and said, “First time, after 30-some years. It was very sad for us.”

But what happened to the champion, giant-sized pumpkins — the pumpkins that weigh as much as small cars?

A family dentist, Rodebaugh said he was inspired to try growing his own giant pumpkin after a trip to the State Fair of West Virginia.

He went online and researched what a gardener needed to do to grow that kind of a pumpkin.

“I really fell down the rabbit hole,” he said, laughing.

“My family gets a lot of joy in just watching them grow,” he said.

Conner and Rodebaugh begin their pumpkins in late April or May, which is ahead of when seeds for pie or jack-o’-lantern pumpkins are typically planted in July.

The giant pumpkins face the same sort of pests that trouble the smaller varieties — deer, groundhogs and the ravenous squash vine borer.

Conner uses a fence and pesticides, which helps with the borer. Rodebaugh said he tried hot pepper powder to keep the deer away. That only slowed them down, but he settled on an electric fence.

“That keeps them away just fine,” he said.

After the plants fruit, the pumpkins grow fast, both growers said.

After the Pumpkin Festival was canceled in July, Conner said he and his family decided to keep growing their monster pumpkin.

At Labor Day, he said they had a real trophy winner.

But then things took a turn for the worse. Not long after Labor Day, the area got a bunch of rain. The pumpkin soaked up the water like a sponge and split open.

“By then, it was too late for us to start anything else,” Conner said.

He probably would have had a hard time keeping up with growing the pumpkin anyway. In early September, Conner caught COVID-19.

Conner only recently returned to work.

Rodebaugh had trouble this year, too. He said the weather worked against him and he really didn’t have his soil fixed. His best pumpkins for this year failed, but he did manage to grow a 955-pound green squash, which is a state record.

“And that’s pretty cool,” he said.

Both growers said they would try again next year.

Conner has already cleared the plot where his family will raise the next monster pumpkin and planted a cover crop for the winter.

He has high hopes.

For those who didn’t grow their own pumpkins (giant or otherwise), farmers markets are practically overrun with them.

JoAnna Hays at Ed & Ellen’s at Capitol Market in Charleston said people have been buying a lot of what they put out, particularly the painted pumpkins, which she said are coated to last longer than a raw pumpkin.

Ron Crihfield of Crihfield Farms said it’s been a bit slower for him, but he’s still selling a lot of produce.

“People are buying some of the carnival-type pumpkins,” he offered.

Crihfield expected pumpkin traffic to pick up, and soon.

Shrewd pumpkin pickers will pluck up the best of the lot the first or second weekend in October, the grower said, but last weekend’s rains probably reduced the crowds.

There are still good pumpkins, but they won’t last.

Pumpkins will keep for weeks as long as you don’t carve into them or drop a gourd hard on the ground. Once the skin of the pumpkin is cut or the flesh bruised, it will begin to rot.

The West Virginia Pumpkin Festival will return to Milton next year — at least, organizers hope to.

“We started planning for next year just as soon as we had to cancel for this year,” Hinkle said. “We hope to be back a little bigger than before.”

Thu Oct 22 , 2020
NEW YORK – This year has taught us a lot of things, but here is one major 2020 lesson: Tech skills are a virtual necessity. FILE PHOTO: A woman uses her mobile phone and computer at a cafe in Sao Paulo, Brazil October 17, 2017. REUTERS/Nacho Doce With much of […] 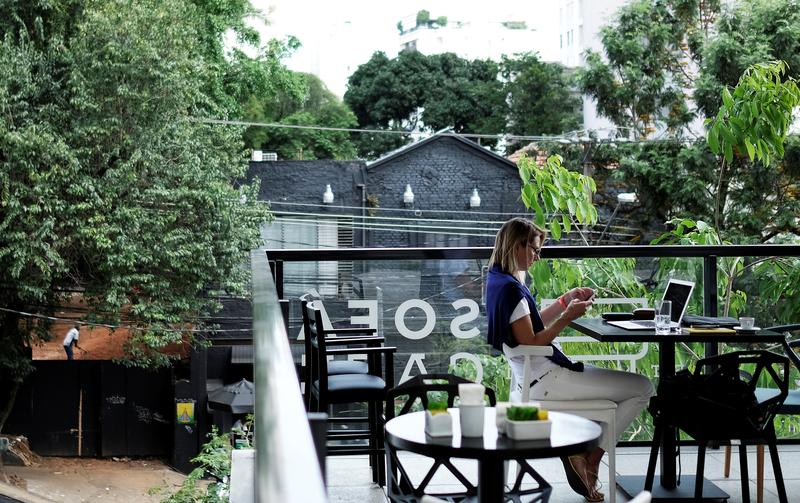