With states and cities across the country forming a patchwork of partial shutdowns due to the COVID-19 pandemic, there’s one state that’s in a league of its own when it comes to the battle over shuttered businesses: Nevada, where brothels are legal but have been ordered closed since March 17, despite the reopening of other “close contact” business, including spas, salons and massage parlors.

In response to what she sees as an “arbitrary” decision that has left legal sex workers “financially devastated,” Alice Little, an employee at the Moonlite BunnyRanch in Mound House, Nev., who’s considered the top-earning legal sex worker in the U.S., filed a complaint and motion for a preliminary injunction against Nevada’s Gov. Steve Sisolak in the Third Judicial District Court in Lyon County. The lawsuit cites unstated damages and seeks the right for her and other licensed prostitutes to “ply their legal trade” at home or other private locations. The suit alleges that Sisolak has, “without any rational basis, decided to single out brothels.”

On Nov. 19, the court ordered the office of the Nevada attorney general to respond to Little’s legal action within 30 days.

“It would be understandable if the governor kept all close-contact businesses closed. But the fact that massage parlors, estheticians, salons, escort services and other non-essential businesses have been allowed to reopen lead me to believe that the governor’s decision to keep brothels closed is just blatant discrimination against Nevada’s legal sex workers,” Little notes in a press release. “I just can’t let the governor arbitrarily decimate the livelihoods of an entire class of hard-working women. That’s why I decided to take legal action.”

Now Little, who has invited other legal sex workers to sign onto the lawsuit with her, is looking for financial support to keep her lawsuit going — through a GoFundMe campaign that’s so far raised over $4,300.

“As many of you know, legal battles aren’t cheap,” Little noted on the campaign’s website. “This lawsuit has been self-funded up to this point, and now I’m asking for your help to allow me to pursue this case all the way through to a successful victory. The brothel’s closure affects far more than just myself — it affects an entire network of working women and staff who are all suffering financially as a direct result of Governor Sisolak’s refusal to reopen these respected adult businesses — hence the need for legal action.”

Little, who got into the sex-work trade five years ago, tells Yahoo Life about the legal effort: “It feels absolutely insane and surreal and it’s the right thing to do and somebody had to do it.” While she cannot know why Sisolak has insisted only on brothels remaining closed, she speculates about “a few different factors” being at play.

“First, the brothels are few and limited in number when compared to places like casinos, which are numerous, large and well-funded, and can make political contributions, so there’s fiscal motivation. The brothels don’t have any such funding… I imagine we simply weren’t very high on his priority list,” she says. “I’d like to think he is not anti-brothel, but at the same time, I’ve never seen him speak a single word in support… He’s not even acknowledged that we are struggling right now. He very well could have negative feelings in regards to my industry.”

Other licensed Nevada sex workers also have spoken out about the shutdown recently. Kiki Lover, an employee of the Sagebrush Ranch, told the Nevada Independent, “I think it’s discriminatory of the governor. He’s discriminating against sex workers,” adding that while the brothels initially allowed some of their live-in workers to stay, all the women have now been forced out, some into homelessness. Lance Gilman, owner of the Mustang Ranch brothel, told the newspaper that he employed 49 people, including security, kitchen staff, bartenders, housekeepers and in-house managers, as well as sex workers.

Suzette Cole, now running four brothels, including Moonlite BunnyRanch after the 2018 death of owner Dennis Hof, told Reno news station KOLO-TV that, as of late October, more than 500 employees remained out of work. Some unemployed legal sex workers have moved their practice underground or have gone back to illegal prostitution, leaving them vulnerable to harm, according to a recent KRNV report.

A spokesperson for Sisolak did not respond to Yahoo Life’s request for comment on Little’s lawsuit. But in October, speaking at a conference, Sisolak said, “Certainly we’re going to have to look at getting kids back into schools before we look at getting folks back into brothels. We’ll be addressing it sometime, certainly, but it’s not in the immediate future.”

Nevada permits prostitution, although it must take place in official brothels, of which there are approximately 20 as of 2018, and only in counties with populations of less than 700,000 (which excludes Las Vegas’s Clark County).

The Nevada Brothel Association did not respond to Yahoo Life’s request for comment either but posted about the lawsuit on Twitter, noting there’s “no rational excuse” for keeping brothels closed.

“As long as the state’s legal brothels follow all the same safety protocols as massage parlors and dentists with their fingers in your mouth, there’s no rational excuse for keeping them closed.” pic.twitter.com/sYmeecK3FF

As far as disease experts know, COVID-19 is not sexually transmittable. But according to the Mayo Clinic, “There is currently no evidence that the COVID-19 virus is transmitted through semen or vaginal fluids, but the virus has been detected in the semen of people who have or are recovering from the virus. Further research is needed to determine if the COVID-19 virus could be transmitted sexually.” The article adds that, because the virus spreads by respiratory droplets, “coming into contact with a person’s spit through kissing or other sexual activities could expose you to the virus.”

Research on the topic, published in April by the University of Utah Health through the American Society of Reproductive Medicine, found no evidence of COVID-19 being sexually transmitted. Study co-author and University of Utah Health professor Dr. James Hotaling has previously told Yahoo Life that the report shouldn’t necessarily be a green light to run out and have sex, since COVID-19 is spread through saliva and can be transmitted days before symptoms appear. But the fact that it does not appear in semen is a good sign, he added.

Little tells Yahoo Life that she believes the risk level of brothel sex is not so different from that of other services, which are open for business.

“The risk level is similar — you are in close immediate proximity with someone for more than 15 minutes, and oftentimes services require your mask be removed, like dental appointments or tongue piercings, or certain tattoos,” she says. “We also need to think about harm reduction… People are still having casual hookups. Sex with casual acquaintances didn’t cease to exist because of the pandemic, and there’s been no moratorium on Grindr or Tinder.” At the brothels, she adds, “We are STD and STI tested, plus we have the capacity to add COVID testing to our regular routine… and sex workers use condoms and dental dams, so we’re very readily equipped to do things in the safest manner possible.”

For the time being, Little has been supporting herself, like others in her position, through online sex work, specifically through the platform OnlyFans. “That’s the primary way, but I’m also doing affiliate marketing and meets with guests for digital intimate encounters — everything from a friendly walk in the park with our dogs to more of a frisky, intimate encounter.”

Before working at the BunnyRanch, Little says, she had a career as an “intimacy educator,” but when she heard about the brothel opportunity, she was intrigued. “I love getting to connect with people … to create a space that allows them to share their innermost thoughts and feelings,” she explains. “For some, intimacy isn’t a need they can get filled anywhere else in society.” Though Little is often touted as being highly successful, she says she typically books $1.2 million a year but notes that the Ranch takes 50 percent of her earnings, “not to mention taxes, medical benefits, insurance — any benefits we want, we’re required to provide for ourselves. We are independent contractors, not employees.”

When co-workers have tried to apply for cashier or other “vanilla” jobs, she says, “the second they submit their resume, no one is going to hire them because ‘sex worker’ is so heavily stigmatized in this country. It’s very difficult to get a job in a different industry, and it’s also difficult to get a strong foothold in these [digitial sex] platforms.”

Little stresses that “sex work has been with humankind since the beginning of time,” and adds, “We have a place in society, we fulfill a need for society… We’ve got to accept it and learn how to live with it, and if it isn’t for you, that’s totally OK. Just live and let live, and let me be allowed to fulfill my role in society.”

For the latest coronavirus news and updates, follow along at https://news.yahoo.com/coronavirus. According to experts, people over 60 and those who are immunocompromised continue to be the most at risk. If you have questions, please reference the CDC’s and WHO’s resource guides.

When can you get the COVID-19 vaccine in Dallas? It depends. But 500 health care providers are preparing

Tue Dec 8 , 2020
Before Catherine Troisi’s book club began discussing the finer point of “Becoming Duchess Goldblatt,” her fellow readers only wanted to know one thing. And it had nothing to do with the memorial of an 81-year-old social media personality. Their main question was: When could they get the COVID-19 vaccine? The […] 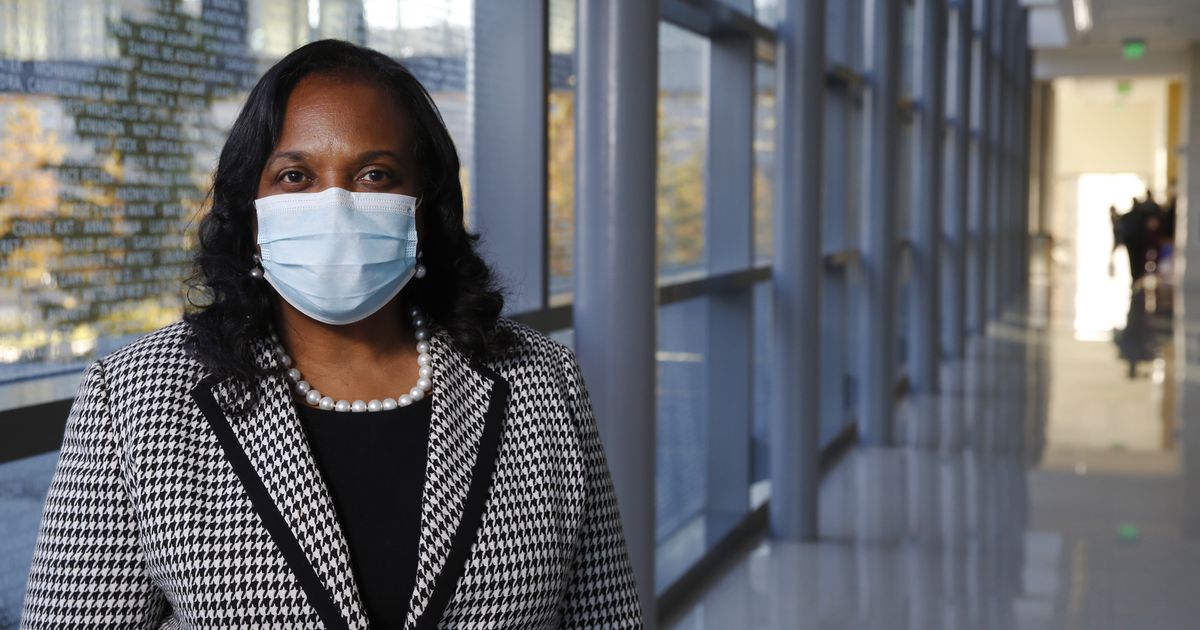