A week after the United States surpassed 3,000,000 coronavirus cases — around a quarter of the world’s cases and deaths — the coronavirus pandemic continues unabated.  Governors and other leaders in states including California, Texas and Michigan continue to grapple with plans to reopen their economies – or slow them down […]

A week after the United States surpassed 3,000,000 coronavirus cases — around a quarter of the world’s cases and deaths — the coronavirus pandemic continues unabated.

Governors and other leaders in states including California, Texas and Michigan continue to grapple with plans to reopen their economies – or slow them down again – amid this severe uptick in cases. Twenty-five states have taken action to cut down on skyrocketing COVID-19 cases.

Among measures on the table: shutting down high-capacity businesses such as bars and gyms, halting elective surgeries and requiring people to wear masks.

Here is a look at which states have paused their reopening or taken other steps. This list is continually updated.

After days of an “alarming” upward climb in coronavirus cases and hospitalizations, Alabama Gov. Kay Ivey announced she will enforce a statewide mask order starting July 16.

Ivey had previously said she believed a statewide mask mandate would be hard to enforce. But Ivey said the “numbers do not lie” and reiterated the severity of the situation.

The order is currently set to run through July 31 and supersedes any local orders.

Alabama saw 40 coronavirus deaths July 14, its largest single-day increase, as new cases and hospitalizations continued an “alarming” uphill climb. The state has a total of 56,441 cases and 1,136 deaths.

Gov. Doug Ducey issued an executive order requiring bars, gyms, theaters and water parks to shut down June 29. The order follows mounting pressure to respond to ballooning COVID-19 numbers that followed his accelerated reopening plan, which he announced in May.

“Arizonans have been, by and large, terrific, fantastic and responsible,” the governor said. “But, we have found some situations in categories where we need to take more aggressive actions, and that’s what we’re going to do today.”

Nearly two weeks after moving into phase two, which allowed for two-thirds capacity in restaurants and other businesses, Gov. Asa Hutchinson said he’s not ready to ease business restrictions further as the state experiences a spike in coronavirus cases.

As of July 15, the state has surpassed 30,000 confirmed cases, nearly 6,500 which are currently active, per the Arkansas Democrat-Gazette.

As California faces an explosion of new COVID-19 cases, Gov. Gavin Newsom ordered all bars to shut down and all restaurants, wineries, theaters and museums with indoor operations to shut down July 13. This follows an ordinance that only applied to some counties on the state’s monitoring list, including Los Angeles and Orange.

More than 30 counties must also close places of worship and fitness centers, among other non-essential businesses.

The new guidelines for bars will allow bars to serve take-out alcohol. Bars that have also changed their business model in response to state guidelines and are now serving food can remain open as a restaurant as long as they keep patrons six feet apart, seated with their own groups, and do not allow groups to mingle.

Delaware did not move into phase three of its economic reopening on June 29. The announcement, issued by Gov. John Carney, postponed official action until this week so officials “can get a better handle on what’s going on in Delaware and around the country.”

“Too many Delawareans and visitors are not following basic public health precautions,” Carney said.

At the end of June, he also announced restrictions on parking at state beaches, as well as face covering requirements in public areas at the beach prior to the Fourth of July weekend. Those restrictions remain in place.

The number of COVID-19 cases in Florida surpassed 300,000 on July 15, the third state to do so. On June 26, the state’s Department of Business and Professional Regulation announced it would suspend on-premise consumption of alcohol at bars statewide. Bars will still be able to serve drinks in to-go containers.

Halsey Beshears, the department’s secretary, said the action was taken because of an increase in COVID-19 cases and noncompliance by some businesses. Restaurants that serve alcohol will be allowed to stay open. However, Gov. Ron DeSantis has not rolled back any other reopening plans.

Hawaii is delaying its plan to allow out-of-state visitors until September.

Gov. Brad Little announced that the state will remain in phase four of its reopening process through at least July 24 after a nearly monthlong spike in COVID-19 cases. Phase four allows visits to senior living facilities and corrections facilities, and it allows nightclubs and sporting venues to open with limited capacity. It is the last stage before full reopening.

The state has reached a total of nearly 12,000  confirmed and probable cases as of July 14.

Stage 4.5 will temporarily pause increases in capacity at restaurants, bars and entertainment venues, among others.

“This virus is on the prowl,” Holcomb said. “In some places it’s gaining momentum. It’s not slowing down.”

The new stage is set to last through July 17. Under the governor’s initial five-phase plan to reopen the state, Stage Five was set to begin in most of the state on July 4.

Each individual school district’s reopening plan will be based off recommendations and mandates set forth by the Kansas State Board of Education.

The Kansas Department of Health and Environment has reported over 20,000 positive COVID-19 cases as of July 14. The agency has reported 304 deaths.

Louisiana has hit over 84,000 total coronavirus cases as the state’s hospitalizations and ventilator use continued to rise.

Gov. John Bel Edwards issued a 28-day order June 23 to keep the state in phase two of reopening. That allows restaurants, malls, gyms, theaters, museums, bars and other businesses to operate at 50% capacity.

“The fact of the matter is we’re not getting better; we’re getting worse,” Edwards said. “Before it gets out of control we have to get better compliance.”

He also asked Louisianans to avoid large groups and remain home on the Fourth of July Holiday. He traces the origin of Louisiana’s summer surge in cases and hospitalizations to Memorial Day.

A week after Gov. Janet Mills indefinitely postponed the resumption of indoor bar service, she issued a mandate requiring restaurants, stores and other businesses in the city’s southern and coastal regions to enforce mask-wearing.

According to the Portland Press Herald, Mills said that was necessary to deal with an uptick in cases in those areas after “they lifted restrictions dramatically.”

More venues in the state, including movie theaters and museums, reopened July 1 as part of its third phase of reopening, with a 50-person cap and a checklist of requirements.

The state of emergency does not in itself place any restrictions on Michigan residents. But it allows Whitmer to issue executive orders that place such restrictions, including current orders closing gyms and theaters in south and central Michigan, restricting occupancy at dine-in restaurants, and requiring face masks at indoor public places and crowded outdoor spaces.

The governor also signed a package of bills allowing cocktails-to-go at bars and restaurants, which she said would help these businesses serve more Michiganders.

After the state reported a daily high of 145 new COVID-19 cases on July 15, Gov. Steve Bullock issued a directive mandating masks. It requires businesses, government offices and indoor spaces open to the public to ensure that employees, contractors, volunteers, customers and the public wear a face mask that covers their mouth and nose.

Gov. Steve Sisolak signed an emergency directive extending phase two of the state’s COVID-19 recovery plan through the end of July. Churches, salons, bars and gyms, all at limited capacity, were part of the state’s second phase.

The move fulfills a promise Sisolak made last week, when he announced a statewide mask-wearing mandate and said “any discussion of entering phase three will be tabled” until further notice.

Gov. Michelle Lujan Grisham said the state will pause the next phase in reopening businesses that have been closed or are operating under restrictions. The state would begin to enforce mask-wearing in public. Violators could be fined $100.

Face masks will be required outside under an order expected to be signed July 8 by Gov. Phil Murphy. The announcement of the expected new mandate comes just a couple days after Murphy said there should be a national requirement for facial coverings “certainly when you’re going out.”

This mandate follows a postponement on reopening indoor dining, a major blow to an industry that has struggled since the coronavirus outbreak began.

“It brings me no joy to do this, but we have no choice,” he said.

Gov. Roy Cooper moved to extend the state’s current reopening phase through the end of July, rather than reopen further. The state is adding a new requirement that people wear face coverings in most public spaces.

According to the state’s Department of Health and Human Services, the state will remain paused in phase two through the end of July.

The state registered over 93,000 cases in total. The state reported 2,160 new cases on July 16, the second-highest total during the pandemic.

Gov. Tom Wolf and Secretary of Health Dr. Rachel Levine announced that bars, restaurants and gatherings will be restricted beginning July 16. This comes more than two weeks after mandating masks “whenever anyone leaves home.”

Bars, restaurants, wineries, breweries and private clubs must serve some kind of food to remain open, and must only serve at 25 percent capacity for indoor dining.

As of July 15, Pennsylvania is grappling with over 97,000 cases, according to the Pennsylvania Department of Health. The state’s death toll stands at nearly 7,000.

After July 11, South Carolina’s 8,000 restaurants, bars, breweries and other establishments were ordered to stop serving alcohol after 11 p.m.

His executive order, which he called “the last call,” will not affect the sale of beer, wine and liquor at grocery stores or convenience stores. Bars and restaurants that violate the order can lose their liquor licenses, McMaster said.

Reviewed: The 10 best cloth face masks you can buy online

That comes days after Lee extended his state of emergency declaration on June 29, along with a host of other provisions that were set to expire this week.

Tennessee will remain in a state of emergency until at least Aug. 29, according to Lee’s latest order. The order expanded access to telehealth services, allowed restaurants to offer take-out and delivery alcohol, and eased access to unemployment benefits.

Texas health officials on July 15 reported a record-breaking number of new confirmed coronavirus cases in a single day with 10,791 cases.

A week after mandating masks at all state facilities, troubling numbers prompted Utah Gov. Gary Herbert to require masks in regions of Utah that are home to several of the state’s famous national parks July 2. He announced a pause in reopening in June.

The new regulations will not go into effect until they are published in a newspaper of general circulation, which is expected to occur during the week of July 27.

This followed patchwork of regulations following the third phase of reopening, including prohibiting bar seating in restaurants and bars.

Washington Gov. Jay Inslee announced July 14 that the statewide pause for counties looking to advance from their current stage of economic reopening will continue through at least July 28.

The pause — implemented earlier this month — was originally intended to be in place for two weeks for the state’s 39 counties, which are in various phases of a four-stage economic reopening plan. But Inslee said the number of confirmed cases and hospitalization rate is troubling.

Statewide, more than 41,700 cases of coronavirus have been confirmed.

Thu Jul 16 , 2020
Public school campuses in Sacramento County will not reopen when classes begin for the new school year, officials announced Wednesday, the latest widespread closure meant to curtail the rapid surge in coronavirus cases and hospitalizations. The move, which affects some of the largest school districts in California and leaves tens […] 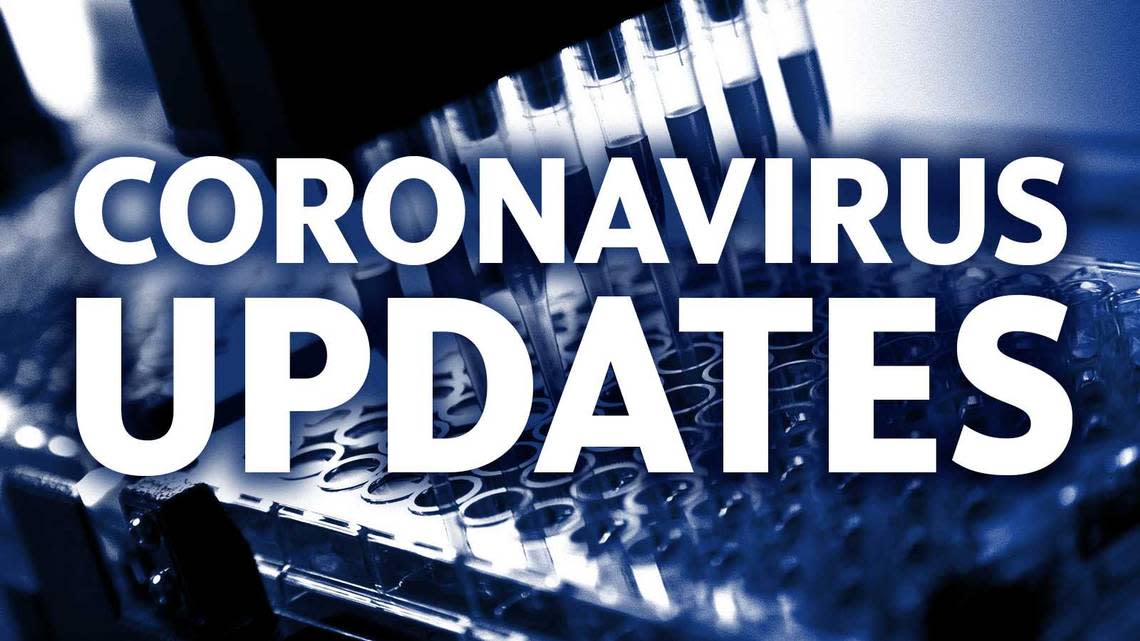