George Neal, the owner of four hair salons across Leicester, believed his business could survive the coronavirus pandemic – if he was able to reopen in early July. But now a second lockdown has begun, his hopes of survival are fading.

“I’ve been saying that the beginning of July is it,” he tells The Independent. “Any longer than that and I don’t know if we can survive.”

His business is one of many that, after preparing for the reopening of trade on 4 July, is now facing fresh uncertainty and financial hardship as authorities attempt to grapple with a localised outbreak that has seen 944 cases recorded within the city over the past two weeks.

As the rest of the country moves to take a welcome but tentative step out of lockdown, there is to be no such relief for the 330,000 or so residents of Leicester.

Here, the pandemic is still making its presence firmly felt. Indeed, the city has recorded 10 per cent of all positive cases in the country over the past week, while hospital admissions for coronavirus have crept up to between six and 10 a day – compared to around one a day at other hospital trusts.

In Neal’s case, his salons were all set to go. From protective screens to social distancing measures, the necessary health protocols were in place. Ten weeks’ worth of appointments had been booked in, with his staff – split into two teams “so that if one were one to contract coronavirus, you don’t lose all employees” – to keep the business open 12 hours a day, seven days a week.

Now, any hope of returning to normality has vanished. “It’s going to be a big blow, absolutely,” he says. “Although we’ve got a lot of our staff on furlough, we’ve got to make up for the 20 per cent of what the government scheme doesn’t cover. It’s left us very near to the bone.”

It had initially been assumed that current restrictions already in place across the country would simply be extended to contain Leicester’s outbreak, meaning only those businesses within the hospitality and personal services sector would have been affected, leaving the local population free to continue visiting local shops, friends and family.

However, the government has reversed many of the freedoms rolled out in recent weeks. Non-essential shops, such as department stores and electronic retailers, have closed from Tuesday, schools will shut to most pupils on Thursday and residents have been advised to stay at home as much as they can while the local lockdown continues.

“They’ve gone further than we anticipated they might,” Sir Peter Soulsby, mayor of Leicester, said on Monday. Health secretary Matt Hancock later insisted that the “broader action” was needed. “Targeted action wasn’t working,” he said, explaining that the introduction of additional testing units and visits to local factories and workplaces “unfortunately” had failed to limit the rate of transmission.

The town itself was eerily quiet on Tuesday morning. After a slight increase in footfall and activity over the past two weeks, the surreal silence that marked the peak of the pandemic has since returned. Among those affected by the new rules, which Hancock has said would be enforced by police in some cases, there was nothing but a sense of deflation.

Withers Sports, which has been serving customers just off the high street for more than 75 years, pulled down its shutters again this morning after barely two weeks worth of trade after non-essential shops reopened on 15 June.

“It’s heartbreaking,” owner Steve Brett said. “You’ve got businesses that are 80 years plus old. Three months ago you go through all the emotions, the anxiety, the stresses, the concerns. You think are you going to come through this? And now we’re back to this.

“It’s horrendous. We’re online as well so it’s not been too bad. But I feel for the restaurants, cafes, pubs.”

Like other businesses in the area, Brett is concerned as to whether the government will continue to provide support if Leicester finds itself being repeatedly placed into lockdown over the coming months. “I hope there’s going to be some compensation for this. We’re going to need more help if this keeps on happening.

“I understand why, we have to be sensible and safe. I just hope people take heed of this and understand that there are consequences for actions. If people aren’t listening to lockdown rules, then businesses are going to suffer. We just can’t continue like this.”

A few streets away, the Rutland & Derby Arms stands as quiet as it has been for the past three months. After being informed last Wednesday he could reopen on 4 July, Sam Hagger had been tirelessly working to prepare his pub, along with the three others he owns in Leicester, and “getting the doors open” again.

“It’s going to delay the much-needed return of cashflow to our business, because we’ve had no income since March,” he says.

“Only two of our four pubs are applicable under the government business grants release scheme. We’ve got pubs that have literally had no income and we’ve paid all our bills, our trade creditors and teams, but it’s left us a little bit light.”

Beyond the further loss of revenue from now absent punters, Hagger has also spent money preparing to reopen – all now wasted.

“We’ve let the supply chain know we’re going to reopen,” he explains. “Although we won’t open at the same strength we were before lockdown, we’ve obviously let people know that we’re going to start buying certain amount of food we’ve previously bought, and now all of a sudden we’ve come to a grinding halt.”

As residents scramble to see how the lockdown will affect them – a map has been drawn to highlight where the restrictions extend to, while a postcode checker is also being developed – there remains a number of unanswered questions hanging over the city: What has driven this outbreak? Why didn’t the government’s preemptive measures work? And how will the lockdown be realistically enforced?

The Leicestershire Police Federation on Tuesday demanded urgent clarity from the government over their expected role in enforcing the lockdown.

There is also the question of why action has only been taken now, when the government knew 11 days ago that cases were spiking in Leicester, and why local authorities were kept in the dark.

“We’ve been struggling to get information from them (the government) about what data they had, what led them to believe there was a particular problem here, and struggling to get them to keep the level of testing in Leicester,” says Soulsby, who claims he received a government email at 1am on Monday with recommendations that the city remain under lockdown.

He added he has been trying “for weeks” to access data on the level of testing in the city and was only given access last Thursday.

Then there is the concern regarding the disproportionate impact of the virus on local Black and Asian communities. Health secretary Jonathan Ashworth said on Monday that, as a “proudly diverse city”, Leicester was “particularly at risk”.

Data from the Office for National Statistics has shown that black people are 1.9 times more likely to die of Covid-19 than white people in the UK, while British-Indians are around 1.5 times more likely. A separate report by Public Health England (PHE), published earlier this month, said such disparities may be explained by social and economic inequalities, differing risks at work and the prevalence of conditions such as obesity and diabetes among minority groups.

North West Leicestershire MP Andrew Bridgen suggested that the city was a “perfect storm”, with younger people who are less likely to comply with lockdown restrictions, a large ethnic minority population, multi-generational households and large food processing and garment industries.

Although coronavirus outbreaks have already been recorded in a number of slaughterhouses across Europe, including a chicken plant in Wales and meat-packing plant in West Yorkshire, authorities in Leicester have yet to confirm the role played by these densely-populated workplaces in contributing to the city’s high infection rate.

Experts have also warned that there is no evidence for rhetoric, espoused by several city residents, that minority groups – whom they alleged had not followed guidance – were to blame.

“It would be wrong for [local people] to be accused of not following guidance, or if it was suggested that the diversity of the area is to blame,” Linda Bauld, a professor of public health at the University of Edinburgh, said.

“Let’s be clear – the restrictions being re-introduced are not the fault of the local population. There is no evidence that their behaviour has been being ‘at odds’ with other parts of England.”

What the data does suggest, however, is an “unusually high” incidence of coronavirus in children. Hancock said that while work was still being done to understand Leicester’s outbreak, extra testing revealed that a large percentage of under-18s had tested positive for Covid-19, therefore justifying the decision to close local schools.

Analysis of 800 local hospital admissions has also revealed that late middle-aged men have been “heavily affected”, along with elderly people, Soulsby said on Tuesday. He added that “BAME communities in general have had somewhat higher rates of admission to hospital than the white community” but were “not outlying with figures from elsewhere.”

For now, though, the city remains in the dark over what has passed and what is to come. The only certainty, it seems, is that while Leicester may be the first to find itself subjected to a localised lockdown, it won’t be the last.

What are the UK lockdown rules now?

How to ease yourself back into socialising once lockdown lifts

Which countries are seeing a second wave of coronavirus?

How to wear a face mask safely

Tue Jun 30 , 2020
A new pandemic threat could be simmering in China while at home the nation’s leading infectious disease expert warned that new cases could reach 100,000 per day if the trend isn’t av For now, though, more states are tightening restrictions aimed at tamping down an alarming boom in coronavirus cases. New […] 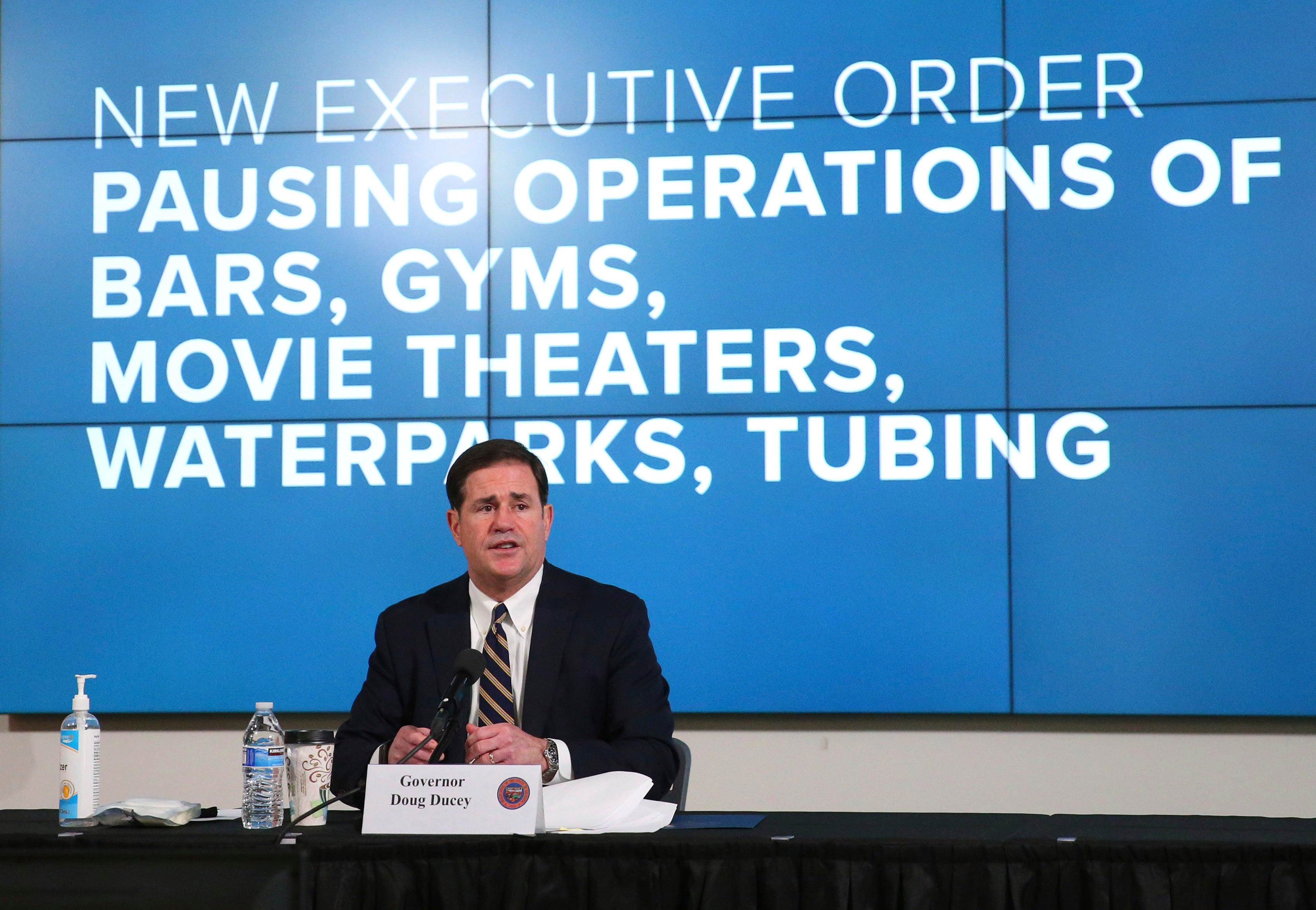