(Bloomberg) — The head of the U.S. Food and Drug Administration acknowledged errors in comments about blood plasma therapy and said he would never reverse an agency decision for political reasons. Japan’s virus czar said the country faces a second wave of Covid-19 cases larger than the first, while South Korea ordered striking doctors back to work.

Germany extended a program aimed at preserving jobs during the pandemic. University of Cambridge scientists won funding from the U.K. government to start trials for a DNA-based vaccine against multiple coronaviruses.

California and Florida reported positive trends, adding to signs that an infection spike in Sun Belt states is easing. Houston tried to maintain social distancing while preparing for the blow from Hurricane Laura.

Global Tracker: Cases top 23.82 million; deaths pass 818,000Pandemic halts Vietnam’s three-decade economic boomWorst-hit nation in Southeast Asia risks losing in vaccine raceAfter beating the virus, Wuhan is now shutting out the worldSome countries that don’t want to wait for superpowers’ vaccinesBack to school could be dangerous for someUnderstanding the virus and its unanswered questionsVaccine Tracker: Where we are in the race for protection?

Subscribe to a daily update on the virus from Bloomberg’s Prognosis team here. Click CVID on the terminal for global data on coronavirus cases and deaths.

The Dutch government aims to focus only on the most affected companies in a third state-wage support program, which will reimburse less salary, De Telegraaf newspaper reported Wednesday, citing people it doesn’t identify.

Under the second state aid program, which covers June-September, companies that expect to lose at least 20% of sales can ask for reimbursement of as much as 90% of staff wage costs. The Cabinet wants to raise the lost sales cap, possibly to 30%, which would lower the maximum reimbursement to 70% or 80%, the paper said.

Two government ministers are scheduled to meet representatives of trade unions and employers Wednesday to discuss the third aid package.

China feels unfairly “singled out” by Australia’s push for an inquiry into the origins of Covid-19, with a diplomat suggesting Prime Minister Scott Morrison’s government was helping the U.S. attack Beijing.

Speaking Wednesday to reporters in Canberra, China’s deputy head of mission to Australia, Wang Xining, noted Covid-19 was first identified in China but scientists must still report their findings on its origin. He provided no clear answers when asked if Beijing’s trade sanctions on beef and barley exports were retaliation over Morrison’s calls for the investigation.

Cinema operators must adhere to strict protocols, such as requiring face masks and only allowing customers between 12 and 60 years old. Total infections in the city of more than 10 million people jumped to nearly 35,000 as of Tuesday as Indonesia grapples with the second-worst outbreak in Southeast Asia.

Singapore will tighten border measures for travelers arriving from South Korea after a resurgence of virus cases there.

Those who have traveled to or transited in South Korea within the past two weeks will be required to serve a 14-day quarantine at government-run facilities when they enter Singapore, the Health Ministry said in a statement. Travelers will need to take a Covid-19 test before the end of their quarantine.

Fluidigm received Emergency Use Authorization from the U.S. Food and Drug Administration for a saliva-based test to detect nucleic acid from Covid-19, the company said in a statement.

All Hong Kong ID card holders, including permanent and non-permanent residents, can register online for the government’s city-wide voluntary coronavirus testing program Aug. 29, according to the government’s website.

Medical staff will take nasal and throat swabs at community testing centers in all 18 districts. Participants will be notified of negative results by SMS, while the Health Department will call those who test positive to arrange for isolation and treatment.

The funds would be in addition to the C$19b Safe Restart Agreement package, which is aimed at helping provinces mitigate the pandemic’s impact on their economies and health-care systems.

A South Korean official said the government is discussing what would need to happen to raise anti-virus measures to the strictest level, but dismissed rumors that such a policy would be announced today.

Yoon Tae-ho, a senior health ministry official, said in a briefing that the government will monitor the situation this week before deciding whether to strengthen social-distancing measures to Level 3, from Level 2 currently. Official issuance of the highest-level regulations is not currently under discussion, Yoon said.

Japan is considering how to make social-distancing rules more binding as it confronts a second wave of coronavirus cases larger than the one that prompted a state of emergency in April-May, Economy Minister Yasutoshi Nishimura said.

Any emergency declaration in the future could be targeted to specific areas or industries, said Nishimura, who heads the country’s virus response.

Brii Biosciences, which focuses on treatments for diseases such as Covid-19 and HIV, is considering an initial public offering in Hong Kong as soon as the first quarter of next year, according to people familiar with the matter.

The biotech firm is working with investment banks on the potential listing, which could raise about $200 million to $400 million, the people said. In March, Brii announced a partnership with Tsinghua University and a hospital in Shenzhen to develop antibodies against Covid-19.

Hawaii’s most populous island is returning to a stay-at-home order while officials conduct 70,000 Covid-19 tests in the next two weeks. The federal government will help officials test 5,000 people in Oahu every day for two weeks, the Associated Press reported.

Gyms and dine-in restaurants will be closed during that time but religious services may continue in Oahu, which has seen a surge in daily positive cases.

Median weekly incomes in New Zealand fell 7.6% in the second quarter compared to a year earlier, Statistics NZ said Wednesday, the first decline since the data series began in 1988.

The fall reflects people being away from their jobs without pay due to the pandemic and more people receiving government transfers, while more self-employed earners were seen in lower-income brackets, the agency said.

Kentucky Fried Chicken is temporarily suspending its long-time tagline that its food is “Finger Lickin’ Good,” deeming it “the most inappropriate slogan for 2020” amid the coronavirus pandemic, the Associated Press reported.

Safety measures call for people to avoid touching their eyes, nose, and mouth with unwashed hands to reduce exposure to the virus.

Prime Minister Shinzo Abe will unveil new measures against coronavirus as soon as this week, Sankei reported without attribution.

Measures include having mild and asymptomatic cases treated at hotels or homes to allow medical resources to concentrate on more serious patients. The measures are being drafted to help medical facilities cope with Covid-19 during the upcoming flu season, when facilities may come under more strain.

Argentina reported 8,771 new confirmed Covid-19 cases for a national total of 359,638, according to the government, the second straight record daily tally. The government reported 162 deaths, for a total of 7,563.

South Korea issued return-to-work orders to trainee and fellow doctors in the Seoul area who launched a three-day strike Wednesday to protest a government plan to increase the number of doctors and establish a public medical school.

Health Minister Park Neung-hoo called the collective action during the pandemic “deeply regrettable.” The government will take measures including canceling the licenses of doctors who reject the order.

The strike comes as South Korea grapples with a fresh outbreak in Seoul and neighboring areas in recent weeks. The country reported 320 new cases Wednesday morning, bringing the total to 18,265.

U.K. Backs Plan for Vaccine Against Many Coronaviruses (7:15 a.m. HK)

Scientists from the University of Cambridge won funding from the U.K. government to start trials for a DNA-based vaccine that aims to protect against multiple coronaviruses.

The government has invested 1.9 million pounds ($2.5 million) to develop the shot, with the researchers planning to begin phase I trials in the autumn, the university said in a statement Wednesday. The team aims to use genetic sequences of other known coronaviruses to create one vaccine that goes beyond Covid-19 to fight related diseases such as Middle East respiratory syndrome, or MERS.

English children over the ages of 11 will now be required to wear face masks in schools in high-risk areas, the U.K. government’s latest U-turn on coronavirus policy.

From Sept. 1, staff and pupils in secondary schools in areas under possible local lockdowns must wear masks when moving around the building and in communal areas, but not in classrooms. In less risky areas, face masks will not be obligatory but schools will have the discretion to make it a requirement.

Germany extended a program that has kept millions of people from losing their jobs to help Europe’s biggest economy recover from the coronavirus crisis. Chancellor Angela Merkel’s coalition agreed Tuesday to provide the job-preserving subsidies, originally intended for 12 months, until the end of 2021.

Germany has used the compensation program to prevent mass layoffs before, helping the country weather the financial crisis in 2008 and 2009. There were about 5.6 million people receiving the benefits in July, compared with 7 million people in May, according to the Munich-based Ifo Institute for Economic Research.

Anthony Fauci, the leading U.S. infectious disease expert, returned to work at the offices of the National Institutes of Health on Monday morning after recovering from surgery to remove a polyp from his vocal cord.

“He’s doing very well,” the NIAID said in a statement. “He is able to talk for short periods and his voice sounds good.”

Carnival Corp.’s Princess line canceled some early 2021 voyages, the latest sign that the pandemic is likely to weigh on the cruise industry for many more months.

The cancellations affect world cruises on the Island Princess from North America and some South America voyages on the Pacific Princess, the company said Tuesday. Carnival is dipping its toe back into the water with a few European voyages next month, including some so-called “cruises to nowhere” that will leave from German ports, sail around for a while and return.

Coronavirus cases in the U.S. increased 0.6% compared with the same time Monday, to 5.76 million, according to data collected by Johns Hopkins University and Bloomberg News. The increase was lower than the average daily gain of 0.8% over the past week. Deaths rose by 0.4% to 177,773.

Houston’s safety plans for Hurricane Laura include measures to protect residents from the coronavirus.

A storm shelter has been established at the George R. Brown Convention Center in downtown Houston that will house displaced residents and also serve as a distribution center for moving some people to other facilities, Mayor Sylvester Turner.

The plan is to use city buses to transport some residents to outlying facilities operated by the Red Cross and others so that social-distancing standards can be maintained, the mayor added. Some virus testing sites will be closed while the storm passes.

France reported 3,304 new Covid-19 cases over the past 24 hours. Tuesday’s number was well below the 4,897 recorded two days ago, the peak for this month and a four-month high. Fatalities rose by 22 in the past 24 hours to a total of 30,544, according to a health ministry statement.

Italy reported 878 new coronavirus cases Tuesday, the lowest in five days. The government tightened rules on mask-wearing and closed nightclubs to reduce the contagion potential. Four people died from coronavirus Tuesday, and one new person was put in intensive care.

Volkswagen AG has installed facilities for voluntary Covid-19 tests at sites across Germany, stepping up efforts to protect its sprawling industrial operations in light of climbing infection rates across Europe.

As many as 2,400 tests per day can be done in Wolfsburg, the home of VW’s headquarters and its largest factory. Results will be available within 24 hours, Gunnar Kilian, VW’s personnel chief, told reporters Tuesday.

bloomberg.com” data-reactid=”119″>For more articles like this, please visit us at bloomberg.com 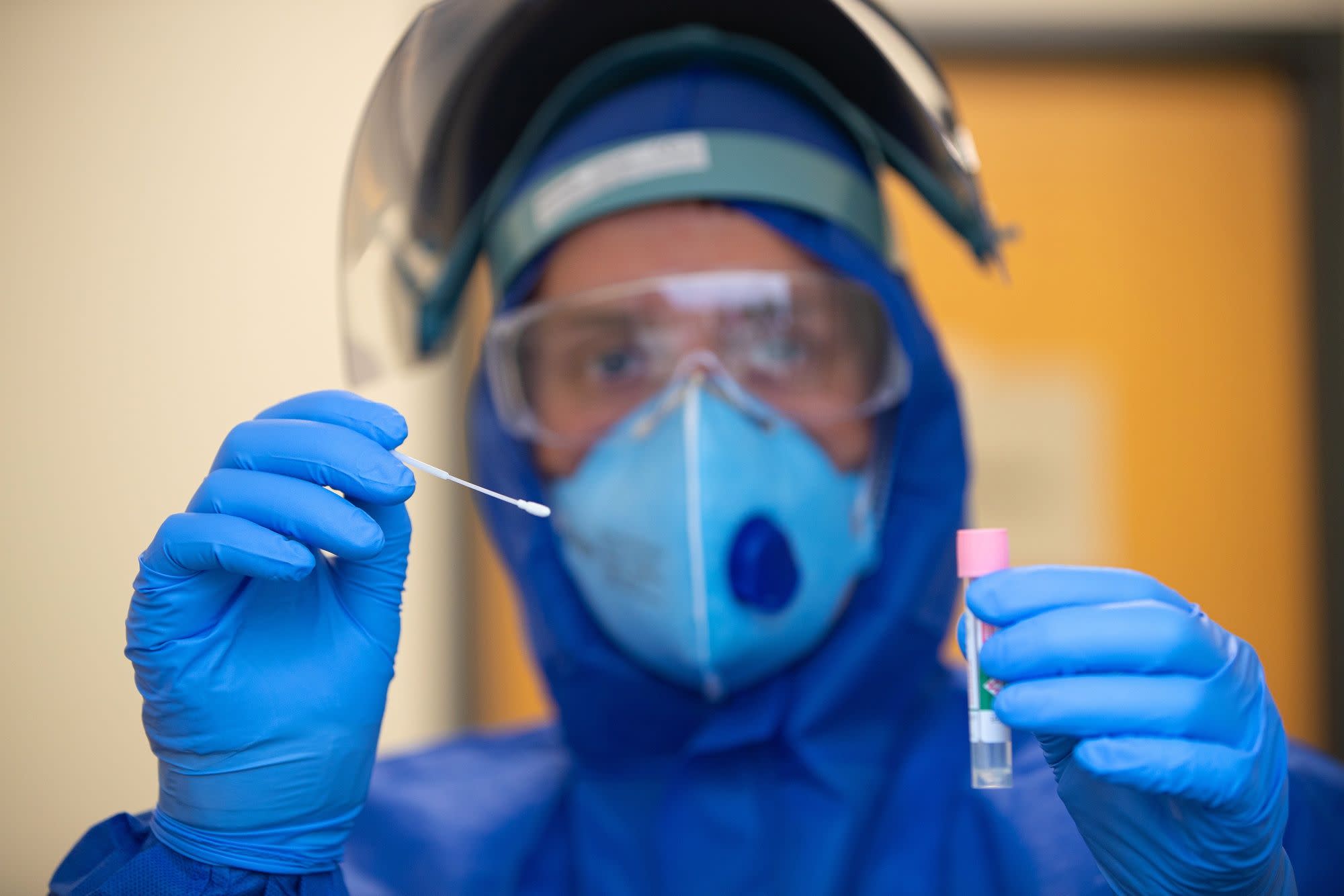