BUFFALO, N.Y. (WKBW) — “I don’t look at this as investing. I look at this as gambling. This is the same as going to the casino and putting all your money on red and hoping that it hits,” 27-year-old investor Hayden Vogal said. “They can make the money today, They […]

What Vogal is talking about day-trading. A form of investing popular among many millennials.

“You are buying a stock on momentum which means you are thinking it will possibly go up that day and you’ll sell it within that day,” Vice President of Collins Advisors LLC Christine Collins-Schwinger explained.

“Years ago Wall Street was kind of running all the shows, banking all the big trades, but now, the retail investors like us who don’t have billions and billions of dollars have some power,” 24-year-old investor Benjamin Vinnik said.

Vinnik and three million other users are getting day trading intel from Reddit.

“You know I’m young so I haven’t been investing for that long in general, but I started on Wall Street Bets probably like a year or two ago,”he said.

In 2015 — Vogal said that same Reddit page earned him enough money to buy a house.

Collins says the successes of day-trading is all caused by momentum.

“So you’re buying it because other people are buying it. And this has always happened. It’s just in a massed scale. Instead of getting the tip from your dentist you’re getting a tip from like 1000 different users online,” she said.

And these users are taking stocks worth say 65 dollars and collectively raising their values.

“It shows that if a business is able to catch on to a trend they can get lucky and keep going,” Vinnik said.

But high risks can also come with high costs.

“I would have to say in general I am concerned about people making decisions without doing the research because you can lose a lot of money,” Collins-Schwinger said.

Stock markets are risky, so Collins-Schwinger suggest anyone planning to do some investing to educate themselves first.

“Money is important for a lot of reasons and it can be a really tragic moment if someone loses a huge portion of their money,” she said.

‘I’ll get the vaccine in my arm, in my bum, wherever, as long as I can see my nan’

Thu Jan 28 , 2021
(Cookstarter/Gousto) Sitting down at his dining room table, his trademark curly hair in a messy bun and AirPods in as he logs onto Zoom, you’d be mistaken for thinking The Body Coach was just your average Joe. “I am,” he insists, but that is far from the truth. While the […] 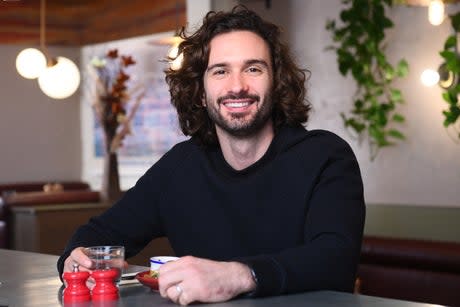