Police are investigating a homicide inside the Seattle autonomous zone. The shooting Saturday morning left one person dead and another hospitalized with life-threatening injuries. Elsewhere, a mural of George Floyd in Salt Lake City was vandalized as San Francisco considers the future of statues and park art after protesters tore […]

Police are investigating a homicide inside the Seattle autonomous zone. The shooting Saturday morning left one person dead and another hospitalized with life-threatening injuries.

Elsewhere, a mural of George Floyd in Salt Lake City was vandalized as San Francisco considers the future of statues and park art after protesters tore down statues.

Trump’s campaign canceled planned outdoor speeches before his rally. Campaign spokesperson Tim Murtaugh said the cancelation was because of protests outside. But journalists on the ground refuted seeing large numbers of individuals turned away due to protesters.

A closer look at some recent developments:

What we’re reading today: Students are sick of “lip service” and want action from colleges over racism. In North Carolina, a coalition of Black student organizations is demanding reforms to the campus police.

Our live blog will be updated throughout the day. For first-in-the-morning updates, sign up for The Daily Briefing.

Eight minority corrections officers who work at the jail holding a former Minneapolis police officer charged with murder in the death of George Floyd allege that they were barred from guarding or having contact with the officer because of their race.

Floyd died on May 25 after Derek Chauvin, who is white, is charged with second-degree murder and manslaughter. He is being held at the Ramsey County Jail on $1 million bond.

The corrections officers filed racial discrimination charges with the Minnesota Department of Human Rights on Friday alleging that when Chauvin was booked into the jail, all officers of color were ordered to a separate floor, according to the Star Tribune, which obtained a copy of charges. The charges allege that a supervisor told one of the officers that because of their race, they would be a potential “liability” around Chauvin.

“I think they deserve to have employment decisions made based on performance and behavior,” said Bonnie Smith, a Minneapolis attorney representing the eight employees. “Their main goal is to make sure this never happens again.”

Formerly known as CHAZ, or Capitol Hill Autonomous Zone, it is an area that stretches several city blocks and has been cordoned off by protesters where artists paint murals, speakers discuss topics of racial equity and snacks are handed out for free.

Police said they responded to a call about shots fired at 2:30 a.m. Saturday morning. Officers “attempted to locate a shooting victim but were met by a violent crowd that prevented officers safe access to the victims,” police said.

They added that the suspect or suspects fled and are at large, with no description available.

A mural in Salt Lake City depicting the face of George Floyd was vandalized Saturday nigh, according to ABC4.

Floyd was a 46-year-old Black man who died in Minneapolis after former police officer Derek Chauvin knelt on his neck for more than eight minutes while Floyd was in custody. His death sparked nationwide protests against police brutality and systemic racism.

ABC4 reported that there was no word of who damaged the mural and that people have been trying to clean it up Sunday.

A local photographer, Chris Kensington, shared an image of the defaced mural on Facebook, and said that it was tar and not paint that was used.

San Francisco Mayor London Breed asked for public art to be reviewed after protesters vandalized and tore down statues in Golden Gate Park.

Breed decried the vandalism, saying “the damage done … went far beyond” the removal of the statues.

“Every dollar we spend cleaning up this vandalism takes funding away from actually supporting our community, including our African-American community,” Breed said in a statement, according to the San Francisco Chronicle. “I say this not to defend any particular statue or what it represents, but to recognize that when people take action in the name of my community, they should actually involve us. And when they vandalize our public parks, that’s their agenda, not ours.”

Breed added that she will ask the Arts Commission, the Human Rights Commission, and the Recreation and Parks Department and its Commission “to evaluate our public art and its intersection with our country’s racist history” to determine the status of other murals and monuments across the city.

If Congress bans chokeholds and no-knock warrants, local police may not comply

The national outcry over the deaths of George Floyd, Rayshard Brooks, Breonna Taylor and other Black Americans at the hands of police has Congress moving with unusual speed to debate sweeping reforms such as bans on chokeholds and no-knock warrants.

The bill House Democrats are expected to bring to the floor Thursday goes further than the version Senate Republicans plan to call up this week.

But even if the chambers can agree on a final measure, there’s a real question whether state and local law enforcement agencies will go along.

The proposals rely on the threat of a loss of federal funding for many of the suggested changes. When that has been tried in the past, federal oversight has been slow, and some states have determined that the funding cuts are smaller than the cost of complying.

“We already have examples of penalties leveraged,” said Chris Asplen, executive director of the National Criminal Justice Association, which represents state, local and tribal governments on crime control. “I would suggest they are not as effective as I think the originators would have liked them to be.”

George Soros, the billionaire investor and philanthropist, is now being accused without evidence of orchestrating and funding the protests over police killings of Black people that have roiled the United States. Amplified by a growing number of people on the far right, including some Republican leaders, online posts about Soros have skyrocketed in recent weeks.

They have been accompanied by online ads bought by conservative groups that call on authorities to “investigate George Soros for funding domestic terrorism and his decades-long corruption.”

Soros, 89, has donated billions of dollars of his personal wealth to liberal and anti-authoritarian causes around the world, making him a favored target among many on the right. Experts who study conspiracy theories say the new claims about Soros are a way to delegitimize the protests and the actual reasons behind them.

Trump’s Saturday rally in Tulsa, Oklahoma featured smaller-than-expected crowds, with rows of empty seats at the 19,000-capacity BOK Center despite an expected turnout of nearly a million supporters. A call to action coordinated by teens and young adults on TikTok and K-pop users on Twitter could explain what happened.

After the Trump re-election campaign opened up registration for free tickets to the rally, K-pop fans on Twitter shared information on how to sign up — with directives to obtain tickets, but not attend.

“Shout out to Zoomers,” she said, referring to the largely Gen Z makeup of these groups. “Y’all make me so proud.”

One man is dead and 11 people suffered non-life-threatening gunshot wounds after an early morning shooting in Uptown Minneapolis, police said.

The man, who is unidentified by police, died at the hospital. All injured were adults.

“Individuals on foot” started shooting at around 12:30 a.m., a police release stated, and fled the scene. Screaming and the sound of gunfire can be heard in a video circulating on social media. Another shows small crowds of people surrounding shooting victims as they were transported by police to the hospital.

No one was in custody in connection with the shooting as of Sunday morning. The victim’s identity will be released by the Hennepin County Medical Examiner’s Office.

Minnesota legislative leaders traded barbs Saturday after a special session collapsed with no deal on revamping policing following the death of George Floyd in Minneapolis, a session that one group called “a train wreck.”

The two sides may be back at it in another special session next month.

Democratic Gov. Tim Walz said Saturday he was disappointed with the special session’s failure and that his administration is planning its next steps.

The Democratic-controlled House early Friday passed an extensive package of police accountability measures wrapped into one bill. It included elements of more modest policing bills that the Republican-controlled Senate passed earlier in the week, but with some additions that Republicans did not like.

Early Saturday, Democratic leaders backed away from some of their demands that Republicans opposed, including having the state attorney general prosecute all police-involved deaths and restoring voting rights for felons.

But they insisted that Republican senators needed to support other major pieces, including banning “warrior-style” training for police, allowing cities to impose residency requirements on officers and creating a state community-led public safety office, the Star Tribune reported.

Black Lives Matter protests against President Donald Trump began peacefully Saturday as the president held his first campaign rally in months in Tulsa, despite warnings from public health officials about the coronavirus.

In a statement released Saturday afternoon, the Tulsa Police Department said it removed a protester from the area outside the BOK Center after the Trump campaign “requested” her removal from a secure area set up in the blocks around the arena.

The department said they tried to convince the protester to leave before being escorted away and arrested for “obstruction.”

The protester told reporters at the time she had a valid ticket for the event. The department said her ticket holder status was “not a contributing factor” in her arrest.

The United States has seen new coronavirus cases climb from about 21,000 a day the last week of May to nearly 23,000 a day this week. Positive tests and, in some places, hospitalizations have spiked, too, leading many to wonder if a change in behavior caused outbreaks in states such as California, Arizona and Florida.

But neither protests or more people leaving home explain the surge of new COVID-19 cases, a USA TODAY analysis of counties with at least 100 cases has found. Residents of counties with growth of 25% or more over the previous two weeks left their homes at the same rate as people in counties without a surge of new infections, according to cell phone location data compiled by the company SafeGraph.

And large protests were as common in counties without outbreaks as in others – although those events could have seeded the virus broadly, and could still lead to outbreaks. Read more here.

Sun Jun 21 , 2020
Click here to read the full article. Jamie Bridgers spent enough time nurturing her daughter and nudging her toward the career she has now — which is, for lack of a better term, rock star — that it make sense she’d pay as close attention as any Phoebe Bridgers fan […] 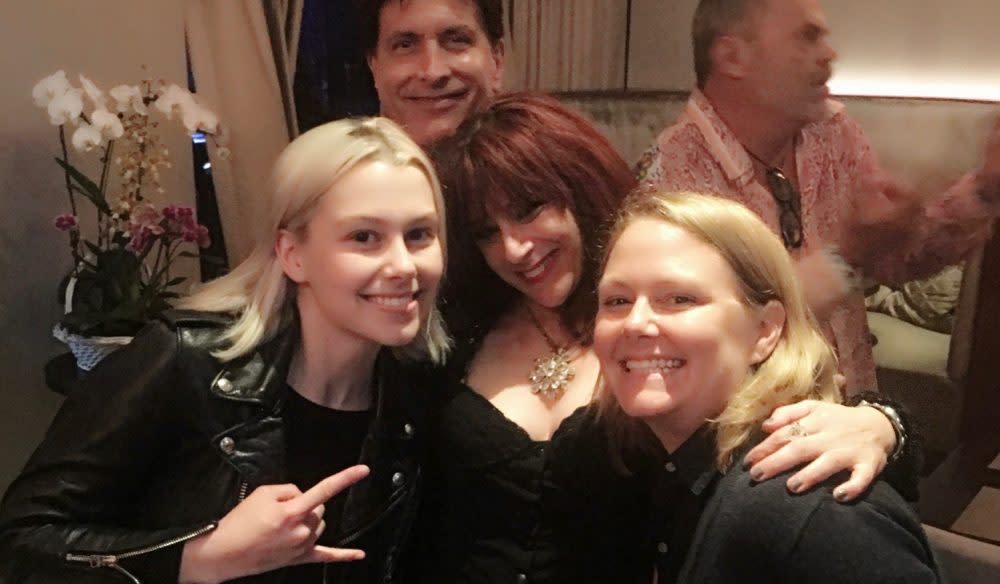