In a year that promised to be chock full of eagerly anticipated film titles held over from 2020 –In the Heights, West Side Story, The French Dispatch — the air went out of 2021, the way it seemed to leave the country. There was very little fresh air to go […]

In a year that promised to be chock full of eagerly anticipated film titles held over from 2020 –In the Heights, West Side Story, The French Dispatch — the air went out of 2021, the way it seemed to leave the country. There was very little fresh air to go round anywhere, even off to the side in the film sector, try as it might to breathe some life into the culture.

2021 may have been a frustrating year at theaters, but there’s always something to see and talk about.

I don’t do a 10 best list per se, particularly in ranked order, because the real question I ask myself isn’t what was best or even better but what worked or didn’t, what did I enjoy and why.

I like Sean Baker’s work, I’ve liked everything he’s done, sketching out the world of adult sex workers in such human dramadies as the insanely great Tangerine, Starlet, the Florida Project and now Red Rocket, without donning the posture of a liberal crusader. He just crosses over and takes you into some part of the American mindset you think is trash and finds human beings being human despite their best efforts to Bleep it up. Red Rocket is the story of a failed porn star returning as if he were the Music Man but without the band and wearing only his undershirt and jeans coming home to his crap Texas town and ex-wife till he stumbles over his next big con and what he thinks will be his ticket to ride back to LA. I saw it in Cannes, I thought it was Aces, chief.

I loved Old Henry with Tim Blake Nelson, in 1906 Oklahoma with a son, a gun and a past he’d rather forget.

I loved Joaquin Phoenix in C’mon C’mon, as a loner middle aged New York public radio journalist called on by his sister Gaby Hoffman to be a great uncle to her 1000 percent too precocious 12 year old son. Phoenix takes the kid, you’d never guess is played by a Brit, Woody Norman, on the road across America in black and white. Took me twice, but I came to love it.

When Drive My Car, a Japanese film by Ryusuke Hamaguchi began popping up in critics groups as their film of the year, I thought it’s “Oh my god time.” I will spend months explaining to my podiatrist and dentist friends why a Japanese film about a Japanese actor stepping into the role of Uncle Vanya in a workshop in Hiroshima and the relationship that develops with his female driver is in fact a good film, worth their time, yes even with subtitles. And I thought, I’m just not up to this fight. But there Drive My Car is, with its beating heart inspired by American indie film giant John Cassavetes, beneath the sleek new towers of Hiroshima. I loved it.

And of course, there was Hand of God, Pablo Larrain’s memoir of growing up in Milan, far more intricate and rich than Kenneth Branagh’s memoir, Belfast, which was a bucket of warm Guinness.

No surprise in a way that I liked Paul Schrader’s The Card Counter, in which Oscar Isaac plays an itinerant gambler who makes one last stab at meaning, criss-crossing America and hollowed out by PTSD from his time as a guard at Abu Graib,. Schrader has written some great films, also some sledgehammers, but in his 60s and 70’s has started mining the faith and sacrifice territory of Carl Theodor Dryer, and has never been better.

IF there was one thing that drove me nuts the last month it was listening to critics asking did we really need to remake West Side Story? I don’t know that means—unless I ask the question about remakes—more like homages– like Nightmare Alley, in which Bradley Cooper, Cate Blanchett and the crew all gad about like kids dressing up in trench coats their parents saw Fred MacMurray wear in Dial M for Murder. No one ever needs a remake of anything, but as Card Counter’s Paul Schrader once pointed out to me in an alcohol fueled conversation in Cannes, there really are only about two dozen stories in the world, so all the world is a remake: it’s all in how you dress down the characters and dress up the sets, or maybe the reverse. If you see West Side Story, you’ll forget about whether Spielberg needed to remake it.

I also want to shout out Peter Jackson’s 9 hours of Get Back, culled from a million hours of old Beatles footage in the year they broke up. It was absolutely riveting.There’s a good case to be made that Get Back is boring, Four guys try to make 14 songs in two weeks for a concert they miss that famously ends up on the roof of their London offices. This is process as sleeping pill. Unless you lived the Beatles then. You watch songs being born. You watch the Fab Four dying. I was riveted. It made me rethink Paul, as he started to drive the others forward one last time. His musical facility is genius. John is more like a firefly than I uhh .. imagined. And however Yoko helped John re-imagine himself, all through the footage here she is a howling second head growing out of his side, never sitting more than 3 inches away. She’ s simply tolerated by the rest of the room in the name of the prevailing do your own thing dogma of the day. George is angry beneath that super earnest zen face, and Ringo is a drummer guy watching the three of them, to see when and if they’re going to let it be and he can start the engine up. I felt privileged to be in that room.

Questlove however rocked the film world with his Summer of Soul doc that recalled the other rock concert of 1969, the Harlem Cultural Festival that took place in the shadows of Woodstock, the white hippie fest—where I was– that ate up the news media attention, It’s a truly extraordinary survey of Black rock musicians laying the foundations of modern music. In a year of good music docs—The Velvet Underground and Hallelujah: Leonard Cohen among them, and musicals like In the Heights – none changed the cultural conversation the way Summer of Soul did.

Then there’s the end of the year Don’t Look Up—the new Adam McKay meteor extinction fantasy with a huge cast, headlined by Leonardo di Caprio and Jennifer Lawrence. It seemed like a fairly benign critique of human stupidity in general and Meryl Streep as a Trump-like president in particular. But it has made some critics mad and some scientists glad. The scientists see Don’t Look Up as a metaphor for global warming, but any threat will do— global infection, election fraud at home, geopolitics abroad—since it’s a rueful comedy about the beginning of our American failure century. I even laughed at Timothee Chalamet, which is saying something. This seems to be the movie that has angered critics the most. It’s not the end of the world, it’s a comedy like a stray bullet: we’ll see the meteor that kills us but we’ll turn it into a celebrity.

What about all these other big titles—King Richard, Macbeth, In the Heights, Don’t Look Up, Licorice Pizza, POWER OF THE DOG, No Time To Die, Dune? You can see a more extensive list of what I thought worked and what didn’t online at talkcinema.com.

I hope cinema can if not save the world in ’22, save its theaters and save itself.

Tue Jan 11 , 2022
“I bring a championship mentality to anything I am involved in,” Super Bowl champ Sylvester Williams said of his new venture: Quantum Laboratory. BRIDGETON, Mo. — Inside a Bridgeton office building, a renovated dentist’s office now houses Missouri’s only Black-owned testing lab: Quantum Laboratory. It’s an $800,000 facility with former […] 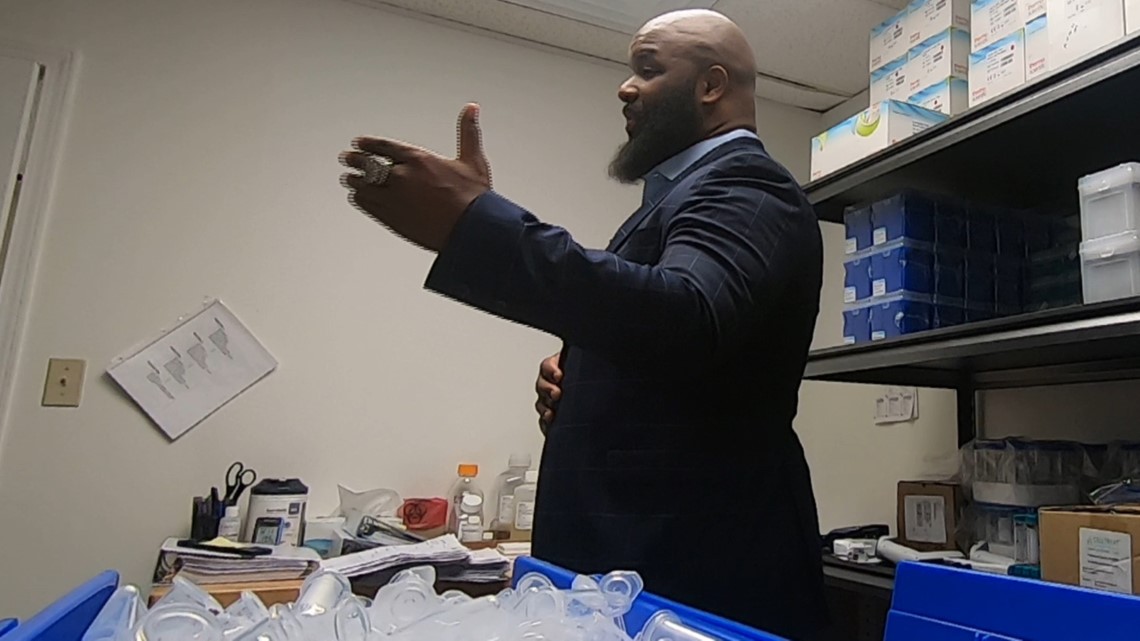