Apr. 5—POTSDAM — Mary C. Rodee is numb in her hands and feet, almost going in and out of reality this week as she looks at the house where her child is dead inside, coming after his family says state troopers told them the 15-year-old was lured and manipulated online past his breaking point.

Riley K. Basford, a sophomore at Potsdam High School and outdoorsman staring at a future in environmental conservation, died on Tuesday. He was 15.

In the short period after he died by suicide, his family wondered how they went wrong. They wondered what they could have done differently and how they didn’t notice Riley in the depths of mental illness. Riley had grown up in a large family. He was the happy-go-lucky person whose humor brought laughter and joy to so many. His mom is a teacher and his dad is a sergeant at a prison. They raised him to learn to cope and to know mental health care was available. They were lost after he died, until at least some closure came when state police reached out with their findings of a partial investigation.

Now, Riley’s family is making it their mission to share his story in which he’s not alone, and to do whatever they can to prevent it from happening to another child.

Darren Basford, his dad, and Mrs. Rodee said state police reached out to them after investigators examined parts of the contents of their son’s cellphone. After being in a crime lab in Albany, the cellphone revealed that Riley had been in messaging with a user or users on Facebook, they said.

Riley had developed a relationship with a person posing as someone they weren’t, and he would end up sending personal photographs. The user he was messaging would end up telling Riley that, unless he paid $3,500, they would share those photographs to family members, friends and on social media. Riley of course didn’t have that kind of money. He had just recently started washing dishes at a restaurant, but he hadn’t even cashed his first paychecks.

Riley saw the blackmail and panicked, his mother and father said, leaving his underdeveloped, teenage brain in a situation many adults couldn’t process.

“He couldn’t reason out what was happening to him and it was happening so fast,” his mother said. “They put him into such a panic that he went out of his mind.”

So fast that, according to messages between Riley and the Facebook user, the threat came in just hours before he died.

Mrs. Rodee said the morning of Tuesday, March 30, Riley was set to get braces for the first time at 10:45 a.m., so he wasn’t going to school.

His mother said she took him to the dentist and back home to his father’s house in Potsdam. She got him a milkshake and took a photo of him before she left. It appears the threats started at around noon, but still, Riley seemed normal to the family. He fed their cows that day, spoke with his uncle he looked up to and talked with his step mom about how getting braces went.

“He was normal and happy,” said Melissa Marion, his stepmother.

It wasn’t until around 2:21 p.m. when Mrs. Rodee got a call from Mrs. Marion, telling her to come to her house and that “It’s Riley,” she said.

Mrs. Rodee said she was in Canton, roughly 15 miles from Riley’s father’s house. The numbness came on when she was driving toward her son. Family members were calling her and asking her not to drive, but she said she was familiar enough with the area and safe enough to make it there. She just went through the motions until she got there and saw the police presence. Friends had begun gathering on the front yard, and she felt like she was entering another world. She would fall to the ground and remember their family mantra to just breathe. Back and forth from reality, Mrs. Rodee said her son’s death would actually set in on that yard. She thought her son’s pain was gone and that he was at peace, but then reality would come back and she would begin screaming again. As she sat on that grass, law enforcement would approach her.

“They were so kind to me,” Mrs. Rodee said. “Every single time Sergeant Jim Gould came up to me to give me an update, he took his hat off, put it over his chest, bent down, looked me in the eye and said ‘I want to tell you the next thing that’s happening right now’ all through the two hours it took.”

Mrs. Rodee and Riley’s father would go on to talk throughout the day, grieving intensely and communicating on what they might have missed in Riley. That was before state police found the Facebook messages. Riley had begun to feel trapped and worried in the course of just hours, and he felt there was no other option, they said.

“I start crying when I think of the four minutes of sheer panic and pain my baby felt to make that decision and that someone out in the world doesn’t even care that they did that to him,” his mother said. “It’s so sick and I want everyone to know.”

Riley’s father, Mr. Basford, said what happened to his son doesn’t feel like suicide. It was, but the apparent manipulation Riley went through makes it seem like murder to him, he said.

“They continued to bombard him and bombard him, and finally they broke him,” Mr. Basford said. “And he thought this was the only way out because he didn’t want to be embarrassed.”

He, too, wants to prevent this from happening to other children. He is pleading with parents to be vigilant with their children’s social media lives. He knows it’s not going to go away, and he has always been adamant about the dangers of social media to his kids.

The community is behind Riley and his family, too. A GoFundMe had already raised more than $30,000 as of Saturday. Mr. Basford said he’s humbled by the support. He said the family intends to form a scholarship fund with the money to help Potsdam kids in Riley’s name.

As for the investigation, Mr. Basford said the next step is to obtain a search warrant of Facebook in order to determine if the threats came domestically or internationally.

In the meantime, Riley’s mother is doing everything she can to plan a Celebration of Life that her son would love. She wants people to wear the clothing they would wear around Riley. She said Carhartts and work boots would be excellent. There will be T-shirts there, a balloon release, rock decorating to take or leave and a remembrance table.

“I have been the mom standing in Walmart arguing with my sweet boy over a button shirt to go to his friend’s wake and I don’t want any kid to go through that,” Mrs. Rodee said. “I want to see them like Riley saw them.”

Guests are invited to an informal gathering between 3 and 6 p.m. to pay respects. Light refreshments will be provided and COVID-19 masking and distancing is expected.

Vehicles should be parked across the road from The Stables, and guests are asked to walk to the site or wait for the provided shuttle.

A memorial service begins at 6 p.m., followed by a balloon release. The service will also be live streamed on the Garner Funeral Service website, garnerfh.com

He was planning to become a Department of Environmental Conservation officer, just like his uncle. His favorite fishing spot was the St. Lawrence River, and his favorite catch was a carp. Mrs. Rodee can’t find any other way to describe her beloved son.

“For lack of a better term, Riley was cool,” his mother said. “Kids liked him. He made friends everywhere he went, and I don’t want kids to think that what happened to him is cool.”

Their initial goal is to stop it from happening to others, and their long-term goal is to rally the government to acknowledge that more funding is needed for cyber terrorism. “He’s one of many who have fallen into that trap,” said Riley’s step mom, Melissa Marion. “We just need to be talking to our kids. I think if Riley had felt more confident in coming to us, he would have, but he was so embarrassed. He just didn’t want people to know. We’ve just got to let kids know that no matter what they do, we will be here for them. There’s always somebody out there who is going to be able to help you no matter what you do. People make mistakes, we as parents have to forgive them.”

50 years after her grandfather was a civil rights giant, this Rutgers coach has blazed her own path toward social justice

Mon Apr 5 , 2021
“Let’s talk about Black Lives Matter and the protests that are happening around the country, and why they should be important to you – and why they are to me. But first, let me tell you about my grandfather. His name was Reginald Hawkins, and he was a proud Black […] 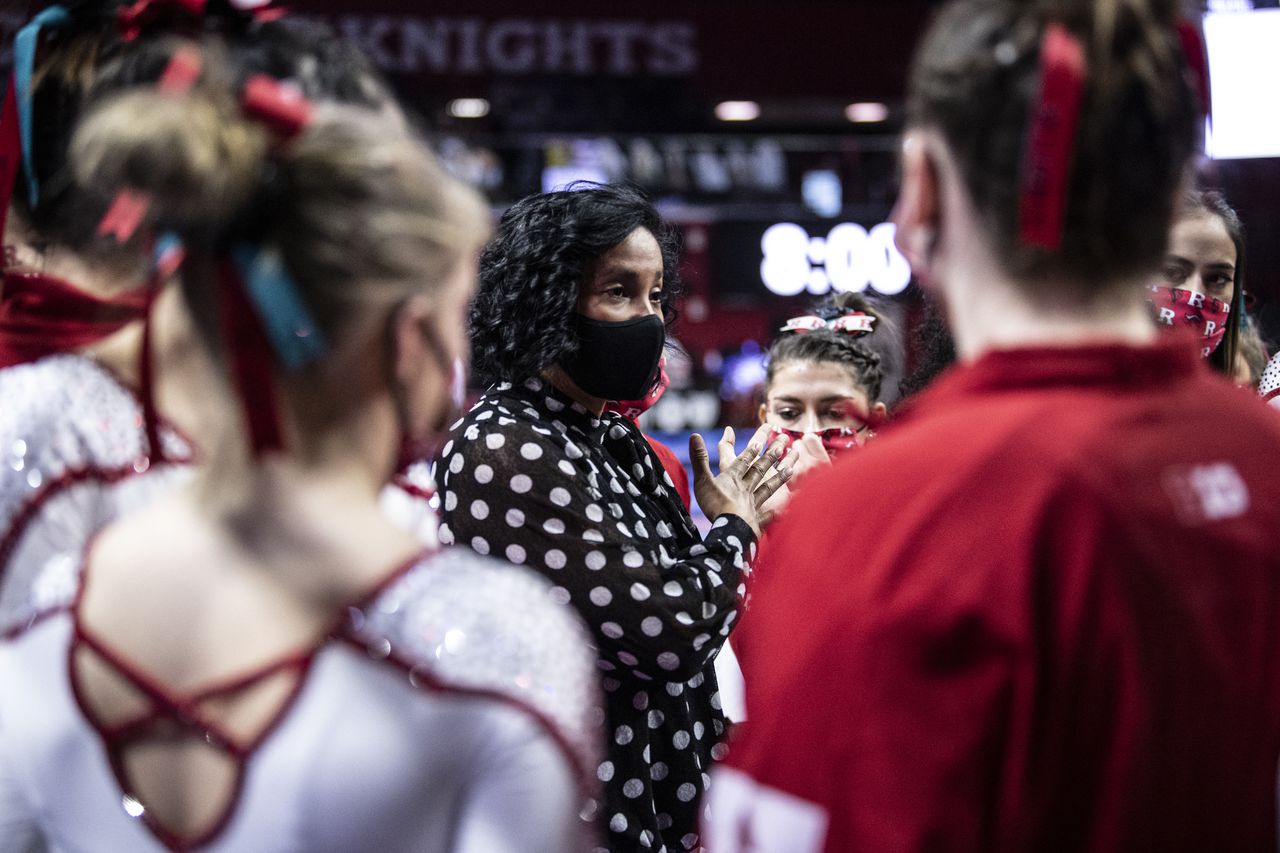