As the number of coronavirus cases exploded across the University of Georgia’s Athens campus in late August, some faculty began asking department heads about shifting from in-person classes to an online curriculum.

After fielding several requests, one faculty chair emailed a dire warning to members of his department: the university would reject any official requests to switch to online learning. And if professors attempted to switch unofficially, the state university system was prepared to track them down.

“I’ve been advised that physical audits (by USG auditors) may take place that check to see that… the class is meeting the day/time/classroom that is listed in the instructional plan,” the chair wrote in an email obtained by The Daily Beast on the condition that the author not be identified. USG refers to University System of Georgia, the governing body of the state’s 26 public universities.

Objections from students taking the classes, he said, would make no difference.

“Votes or surveys of what your students in your class wish to do unfortunately will not constitute a justification for diverting from your approved instructional plan,” he wrote. “My primary intention in sharing this is to make sure none of you unknowingly stick your neck out. I don’t like this situation any more than you.”

Over the last month, as coronavirus cases have surged into the thousands across Georgia’s state universities, these colleges have doubled down on extreme tactics to keep students in the classroom, professors and students say.

“We’re being treated like children who need to be monitored,” said Shira Chess, an associate professor of media studies at the University of Georgia.

“Everyone keeps saying it’s important for students to be on campus, but most of the students I teach don’t want to be on campus,” she told The Daily Beast. “And some faculty feel like they’re being bullied to teach in person.”

In an emailed response to The Daily Beast, UGA included a statement in which the University System of Georgia denied that it had “hired or redirected anyone” to monitor classes. UGA went on to say that it planned to “honor our commitment to our students” by ensuring that students who had signed up for in-person classes received them.

UGA’s emphasis on in-person instruction appears to fly in the face of guidance from the Centers for Disease Control and Prevention (CDC) for higher education. The system has recorded more than 2,500 new coronavirus infections this semester, and “when there is substantial community transmission,” the CDC suggests college administrators consider temporarily moving all classes online.

Dr. William Schaffner, a professor of preventive medicine and infectious disease at Vanderbilt University Medical Center in Nashville, called the push to keep students in the classroom amid a surge in cases “consummate selfishness.”

If a university doesn’t establish clear guidelines and stick to them, he said, “then the whole thing will collapse. We’ll have widespread COVID on campus and then they’ll bring it home and spread it in our communities.”

In response, UGA told The Daily Beast that the university’s “primary commitment has been to the health and safety of our faculty staff and students…. We are encouraged to see many of these students (who tested positive) are recovering and returning to normal activities.” The university also referenced its surveillance testing program, which has a goal of conducting 24,000 coronavirus tests by Thanksgiving, though combined faculty and staff on campus number well over 40,000.

The aggressive efforts to keep kids in class haven’t been confined to Athens.

In a July 31 meeting, Carl Reiber, the provost of Georgia Southern University, said the college had ordered each department to hold at least 80 percent of its classes in person—and noted that Georgia Southern had already exceeded its target, according to notes provided to The Daily Beast by someone in attendance. (The official minutes from the meeting did not include discussion about this target.)

Since then, over 1,000 new cases of coronavirus have been reported on campus, and the White House Coronavirus Task Force named Statesboro, where the school is located, as a red zone city for new infections.

In early September, the American Association of University Professors at Georgia Southern wrote an open letter in the campus newspaper, pleading with the administration to quickly move all classes online. But rather than heed their requests, the school ratcheted up its threshold. For the spring semester, the University intends to hold 85 percent of classes in-person, according to a document from the provost’s office obtained by The Daily Beast.

A spokesperson for Georgia Southern told The Daily Beast the school had been aiming to bring students back to campus since it began planning its fall semester in April, and said that the university “continues to prioritize the health and safety of students, faculty and staff.”

Those who disagree with this strategy have been called out personally—even when they’re students.

After Georgia Southern’s campus newspaper, The George-Anne, wrote several articles criticizing the university for being slow both to adopt safety measures and to release information about coronavirus on campus, a university administrator fired off an email to the paper’s editor, Andy Cole. With a whiff of condescension, the administrator, whose name had been redacted from the version of the email obtained by The Daily Beast, questioned the college paper’s coverage, asking a list of questions such as, “Do you remember when we talked about context in news articles?” and, “Do you understand why you are asked if you have an agenda?”

“I think he was trying to play the ref. He wanted me to see that and say, ‘Whoa, maybe I should lay off.’” Cole told The Daily Beast. “But I told him I do have an agenda. It’s to inform the community.”

Of course, when it comes to keeping students in the classroom, the University System of Georgia—like many such systems—also has its own agenda, according to experts in higher education, and it’s largely a financial one. A significant portion of a university’s revenue comes through on-campus auxiliary programs, like campus dining, residential halls, and sports.

“There is a small educational reason for students coming back, and a large economic reason,” said Gary Rhodes, a professor at the Center for the Study of Higher Education at the University of Arizona. “And universities that are doing predominantly online instruction do not have as many students on campus.”

Had all 26 public colleges and universities in Georgia gone online this fall, total losses would have likely topped half a billion dollars, according to a spreadsheet obtained by The Atlanta Journal-Constitution. In May, Georgia State housing contractor Corvias sent a letter to the board that oversees Georgia’s university system, pressuring them to keep dorm rooms open at full capacity. The board then held a meeting in response to the letter, noting in its agenda that even at the 75 percent capacity that the university had planned, the college would still face a $3.1 million loss and a likely lawsuit from the contractor.

“So keeping students in the classroom is very, very important,” Rhodes said.

But Rhodes noted a third reason that the University System of Georgia would push to keep schools open, and that, he said, was politics. Georgia Gov. Brian Kemp appointed just over half of the 19 current members of the Board of Regents that oversees Georgia’s public colleges and universities. Even among conservative governors, Kemp is considered a vocal supporter of President Trump, and the president has made it very clear that he wants colleges to remain open.

“If the state legislature and the governor are saying, ‘You can’t even require people to wear masks,” what are you going to do?” Rhodes said. “That kind of political pressure is really important. It’s not about the science. It’s about politicizing public health and public safety. And universities are caught in that.”

The office of Gov. Kemp declined to comment for this article, with a spokesperson telling The Daily Beast that “the University System of Georgia is an independent system.”

As part of an effort to stay open at virtually any cost, critics say, some of the colleges have settled into picking on easy targets.

Over the last several weeks, the University of Georgia has continued to push the narrative that classrooms and campus are safe spaces and that the Athens community is to blame for the astronomical rise in new cases. In a press release Wednesday, the school wrote that “UGA’s recent increase in positive COVID-19 tests is largely among students, and appears to be a direct result of off-campus activities, the same as at other large institutions. On campus, the preventive measures of social distancing, wearing masks, washing hands, and keeping surfaces disinfected have been working.”

Still, classroom transmission has been enough of a concern that on Sept. 1, the University of Georgia emailed all of the academic deans to outline what to do should a student in an in-person class test positive. In short—they were to do nothing differently. Classes should remain in-person, and faculty were not to inform even students who had been exposed to the infected person.

“Faculty should not notify others about the positive test as it may violate student privacy, even when a name is not specified in these messages,” said the email, which was signed by Assistant Provost Jack Hu and Vice President for Instruction Rahul Shrivastav. The email did clarify that faculty could inform graduate teaching assistants that a student had tested positive.

Reaction from faculty and students was swift and largely negative. On Sept. 10, Hu and UGA General Counsel Michael Raeber slightly revised their policy, in another letter to deans provided to The Daily Beast by UGA. In it, they gave academic deans the authority to determine whether faculty could notify their students of exposure “on a case-by-case basis.”

Prior to this, Georgia Tech, one of the state’s largest public universities, had a very different set of instructions posted on its website, telling faculty to “please notify those students who were in class” that they had been exposed. By Monday, these instructions had been replaced by a new policy in which the contact tracing team alone would notify “all close contacts.”

“This is information that’s relevant to the health and safety of our community, which they like to say is a priority. But it’s becoming very clear that safety isn’t their priority, and it wasn’t their priority all along,” said Joseph Fu, a professor of mathematics at the University of Georgia.

Meanwhile, student privacy concerns don’t seem to be as pronounced among students themselves. Earlier this month, in a picture posted to Instagram, three members of UGA’s Phi Mu sorority—where Gov. Brian Kemp’s daughter is a member and former officer—held up a hand-made banner that declared “COVID positive but… at least we don’t go to Auburn,” a reference to its longstanding rivalry with the Alabama university. After backlash, the student who posted the image quickly locked down her account, but screen grabs continued to circulate on Twitter.

Exposure also doesn’t appear to have curbed participation in on-campus activities. On Sunday, a UGA student posted a picture of herself on a scooter, acknowledging that despite just finishing quarantine for COVID-19 and testing positive for strep, “semi(formal) is tmrw. And I’m not not going.”

Fu said if the university system continued to push forward with its emphasis on campus life and in-person instruction, the state of Georgia could be looking at what he calls a “covid bomb” timed to go off as students leave campus and head home for Thanksgiving break.

“I guess there’s enough money on the line that they think it’s worth the gamble,” Fu said.

Read more at The Daily Beast.

Got a tip? Send it to The Daily Beast here

Get our top stories in your inbox every day. Sign up now!

Daily Beast Membership: Beast Inside goes deeper on the stories that matter to you. Learn more. 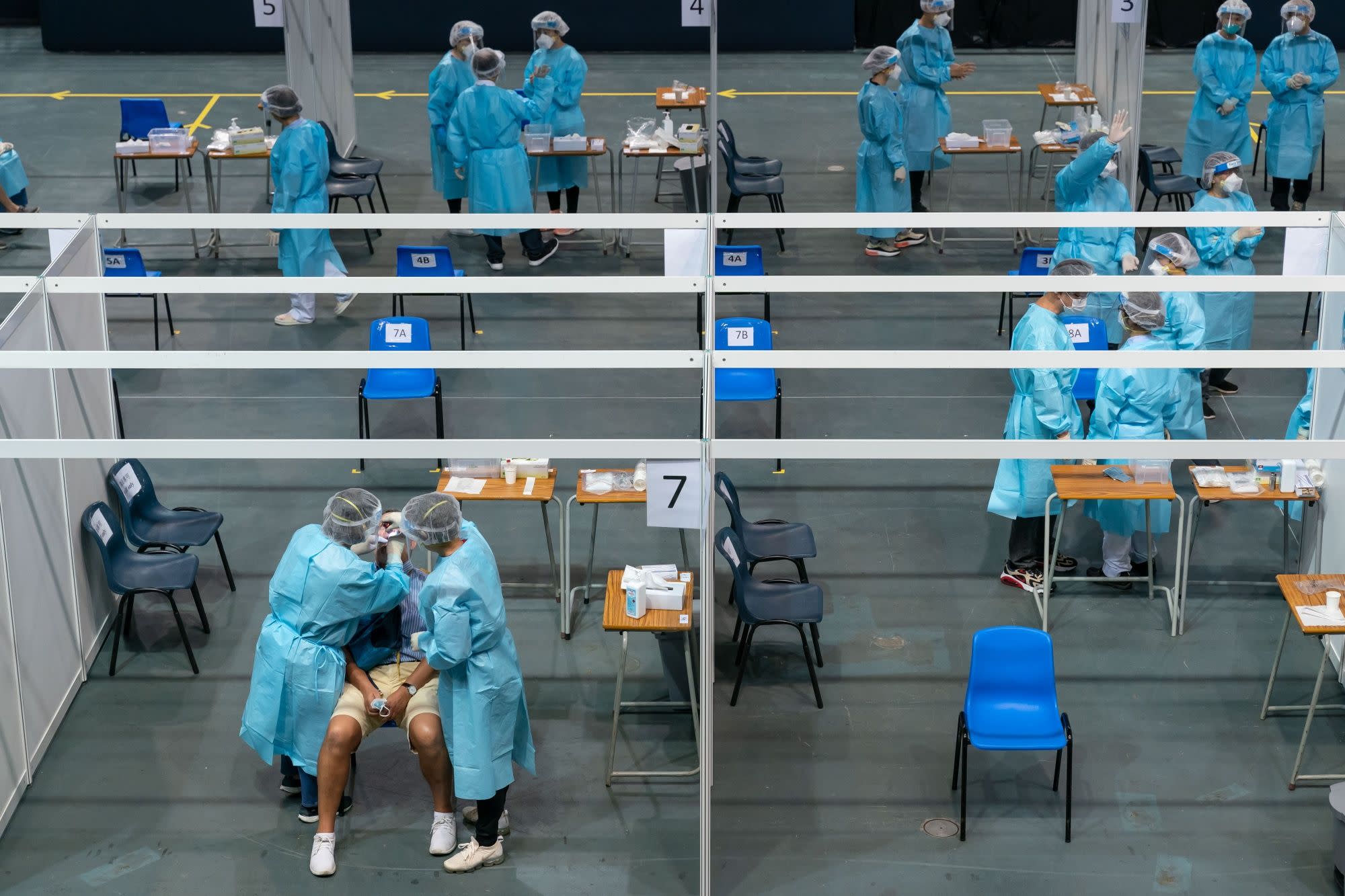