Several hours after the White House confirmed that President Donald Trump tested positive for the coronavirus, Travis County’s top health official said the news should make those at high risk for severe symptoms like Trump remain vigilant about safety.

Dr. Mark Escott, interim Austin-Travis County health authority, warned that local residents who have high-risk factors like the president, such as being older than 65 or obese, should continue to take the virus as seriously as when the pandemic began. The rest of the public, he said, should follow suit to protect those around them.

“The news from early this morning regarding the president and the first lady indicates and demonstrates that COVID-19 can touch anyone,” Escott said, referring to the disease caused by the coronavirus. “It also demonstrates the importance of having layers of protection within our community.”

He said the public must “make sure we’re being careful not only in the workplace, not only when we’re at grocery stores or restaurants, but in our personal lives with our friends and family. Our thoughts are with the President and the First Lady. This is not over.”

The White House early Friday confirmed that both the president and First Lady Melania Trump tested positive for COVID-19. The diagnosis came just hours after Trump stated publicly that the end of the pandemic was “in sight.”

The First Lady on Friday tweeted a message saying she and the President were “feeling good.”

While speaking on local trends, Escott on Friday said recent data from Travis County shows transmission of COVID-19 is mainly spreading through social gatherings, especially for groups who do not socially distance or wear masks during their encounters.

Earlier this week, government and health officials hinted they were on the verge of easing social distancing orders as coronavirus cases in the Austin-Travis County area have seen a decline in recent weeks.

The seven-day average as of Friday morning was 12, with 15 new hospital admissions reported Thursday evening, according to the city’s online data dashboard.

In the past three weeks, the moving average for new hospital admissions for COVID-19, has bounced between 12 and 18, Escott said earlier this week.

Escott on Friday said he plans to revisit the conversation of allowing for larger gatherings outdoors in the next week or two. He stressed again that while COVID-19 cases are decreasing locally, it does not mean residents should stop social distancing or wearing masks.

Travis County is currently in Stage 3 of Austin Public Health’s risk-based guidelines, which allow social gatherings of no more than 10 for people at higher risk for severe COVID-19 symptoms.

If Travis County does move into Stage 2, the most significant change would be that gatherings could increase to a maximum of 25 people as long as they wear masks and maintain distance. Escott said Friday he hoped to move into the next stage “soon.”

According to Austin Public Health, any changes to Adler’s orders must align with Gov. Greg Abbott’s reopening plan for Texas.

Fri Oct 2 , 2020
The Argott brothers (from left), freshman Jesse, senior Frankie and sophomore Gabriel, who all play football for Granada Hills Kennedy and work out in their backyard. (Debbie Bustamante) For almost two years, Frankie Argott never opened the two big boxes he received as a Christmas present. They sat in his […] 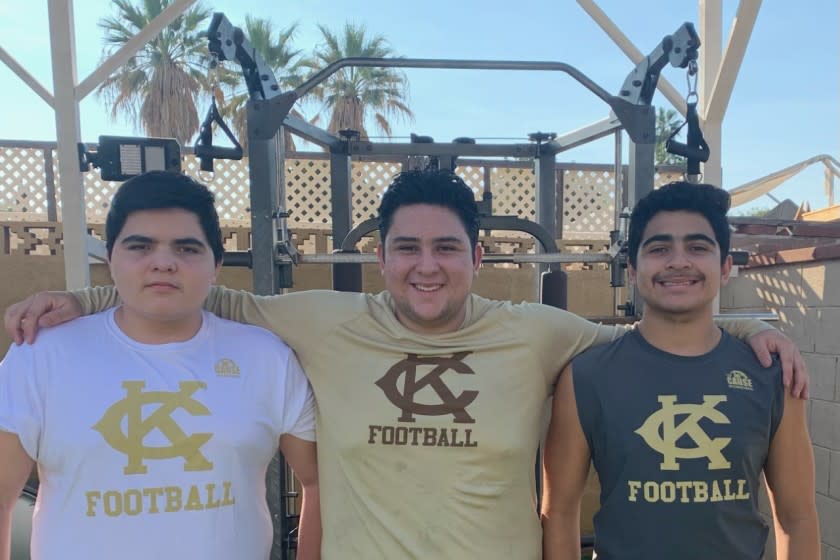