ATLANTIC CITY, N.J. — For the first time in 108 days, slot machines will beep, dice will tumble and cards will be dealt at Atlantic City’s casinos as they reopen amid a coronavirus pandemic.

Gamblers will not be allowed to smoke, drink or eat anything inside the casinos. They will have to wear masks while in public areas of the casino, and have their temperatures checked upon entering.

Three others, Caesars, Bally’s and Harrah’s, will reopen Friday, after allowing their highest rollers a one-day head start on Thursday.

Only the Borgata, the city’s top-performing casino, will remain shut. It quickly decided to scrap its planned reopening after New Jersey Gov. Phil Murphy canceled permission for indoor dining in the state, and imposed smoking and drinking bans on the casinos. The Borgata has not set a reopening date.

HERE’S WHAT YOU NEED TO KNOW ABOUT THE VIRUS OUTBREAK:

— A predicted surge in U.S. job growth for June might not last

— Closing bars to stop coronavirus spread is backed by science

— The coronavirus death toll in Brazil keeps rising and among the dead is a little girl named Vitoria Gabrielle from a working class Rio de Janeiro neighborhood.

— Some public health experts are criticizing the U.S. for securing a large supply of the only drug licensed so far to treat COVID-19. The U.S. government announced this week that it had an agreement with Gilead Sciences to make the bulk of their production of remdesivir for the next three months available to Americans.

— Pfizer and its German partner BioNTech are reporting encouraging signs from its very early testing of a possible COVID-19 vaccine. Preliminary results released Wednesday from 45 volunteers showed hoped-for immune reactions in two of the tested doses.

Follow all of AP’s pandemic coverage at http://apnews.com/VirusOutbreak and https://apnews.com/UnderstandingtheOutbreak

HERE’S WHAT ELSE IS HAPPENING:

PARIS — The French government is asking all companies to keep at least 10 weeks worth of masks for their employees in case of a second wave of virus infections.

Health Minister Olivier Veran said Thursday on RTL radio, “It’s fundamental to respect this guidance. We saw it – our country was not sufficiently stocked with masks” during the first wave.

Shortages of all kinds of masks were a major problem in France when the virus raced across the country in March and April, and are central to several lawsuits launched against authorities.

The government is encouraging companies to buy from French textile manufacturers who have a glut of masks after they switched to making them at government request earlier in the pandemic.

“There is a risk of new circulation of the virus,” secretary of state for the economy Agnes Pannier-Runacher told a parliamentary commission. “We are asking companies to plan for 10 weeks of mask stocks, with a little reminder that we now have French producers.”

France’s national health agency has confirmed more than 300 new virus clusters since the country started reopening May 11, and says about half have been contained. Overall France has reported the fifth-highest number of deaths worldwide from the virus, at 29,861 as of Wednesday, about half of them in nursing homes.

NEW YORK — The United States has reported yet another record daily number of new coronavirus infections, over 50,700 cases, according to a tally being kept by Johns Hopkins University.

The U.S. is experiencing a surge of new cases, especially in the South and West, as states have reopened their economies from coast to coast.

California closed bars, theaters and indoor restaurant dining all over again across most of the state Wednesday, and Arizona’s outbreak grew more severe. The California shutdown announcement, which came just ahead of a Fourth of July weekend that could fuel the spread of the virus, applies to about 30 million people, including Los Angeles County.

The surge in new cases has been blamed in part on Americans not wearing masks or obeying social-distancing rules.

Despite the fact that the U.S. has the most confirmed coronavirus infections and deaths in the world, President Donald Trump did not appear overly concerned.

He told Fox Business: “I think that, at some point, that’s going to sort of just disappear, I hope.”

LONDON — Paul McCartney and Ed Sheeran are among more than 1,500 musicians asking the British government to step in and save the country’s world-renowned live music scene from devastation by the coronavirus pandemic.

The Rolling Stones, Rod Stewart, Little Mix, Coldplay and Dua Lipa are also signatories to an open letter saying that the ban on mass gatherings in response to the virus could mean “the end of this world-leading industry.”

The letter says that “with no end to social distancing in sight or financial support from government yet agreed, the future for concerts and festivals and the hundreds of thousands of people who work in them looks bleak.”

Britain’s summer music festivals are a major employer and revenue-generator. All have been canceled this year, or become online-only events because of COVID-19.

The U.K. government says it is already supporting millions of furloughed workers, including in the culture sector. and is looking at what additional support it can provide.

TOKYO — The Japanese capital has confirmed 107 new cases of the coronavirus, the highest since early May, raising concern about a possible resurgence of the disease just as businesses return to normal.

Tokyo Gov. Yuriko Koike, at a meeting with a panel of experts, said the infections are on the rise and extra caution is needed. Koike said many of the cases are linked to nightlife establishments, and urged workers to proactively take virus tests and further safety measures.

She said, “We are now at a stage where we need to use caution against the spread of the infections.”

Norio Ohmagari, director of National Center for Global Health and Medicine Hospital, raised concern about the rise in the number of untraceable cases that could multiply infections in weeks.

Tokyo has asked hospitals to start securing up to 3,000 beds in case infections spread further. Up to 1,000 beds are currently set aside for coronavirus patients, officials said.

Experts say many of the recent infections were linked to younger people in their 20s and 30s who have visited the nightlife district. Experts also say infections are being brought home from workplaces and elsewhere, posing risks for elderly people and others with preexisting conditions.

NEW DELHI — The number of confirmed coronavirus infections in India has topped 600,000, with health authorities reporting 19,148 new cases in the past 24 hours.

As of Thursday, India’s virus tally stood at 604,641 infections, with 100,000 of those infections reported in the past four days.

India’s Health Ministry said the death toll from the virus was now 17,834 people.

The worst hit three states, including those home to the cities of Mumbai and New Delhi, account for more than 60% of the country’s cases.

Despite the surge in infections, the western beach of state of Goa, a popular backpacking destination, opened for tourism on Thursday with the state government allowing 250 hotels to reopen after more than three months. Tourists will either have to carry COVID-19 negative certificates or get tested on arrival.

The state has so far reported 1,387 positive cases with four deaths.

Many industries and businesses have reopened across the country, and Indians have cautiously returned to the streets. Schools remain closed.

DARWIN, Australia — Australia’s Northern Territory has detected its first person infected with COVID-19 in three months, a man who spent time overseas and in a virus hotspot within the city of Melbourne.

Northern Territory Health Minister Natasha Fyles said Thursday the man returned from Melbourne on Monday before 36 suburbs in Australia’s second-largest city were locked down for a month on Wednesday night.

Fyles said the man had spent two weeks in hotel quarantine in Melbourne after returning from overseas then spent “a couple of days“ with family in one of the 36 suburbs.

Fyles did not say whether the man was likely infected in Melbourne or overseas. The Northern Territory last detected a case on April 6.

Victorian Chief Health Minister Brett Sutton said 77 infections had been detected in the past 24 hours in Melbourne, mostly in the locked-down suburbs.

SEOUL, South Korea — South Korea says it has confirmed 54 more COVID-19 cases as the coronavirus continues to spread beyond the capital region and reach cities like Gwangju, which has shut schools and tightened social restrictions after dozens fell sick this week.

The figures reported Thursday brought the national case total to 12,904, including 282 deaths.

Twenty-two of the new cases are in Gwangju, a southwestern city where infections were tied to various places, including office buildings, public libraries, welfare centers and a Buddhist temple.

Twenty-three of the new cases came from the densely popular Seoul metropolitan area, which has been at the center of a virus resurgence since late May amid increased economic activity and eased attitudes on social distancing.

Health Minster Park Neung-hoo is expressing alarm over the rise of infections in Gwangju, which had one of the smallest case loads among major South Korean cities before this week.

BEIJING — China is reporting three newly confirmed cases of coronavirus, and says just one of them involved local transmission in the capital of Beijing.

The report Thursday appears to put the country where the virus was first detected late last year on course to eradicating it domestically, at least temporarily.

The National Health Commission says the other two cases were brought from outside China. No new deaths were reported, leaving the toll at 4,634 among 83,537 total cases of COVID-19.

China is moving swiftly to re-open its economy, but mass employment looms as the heavily indebted government is reluctant to spend lavishly on stimulus programs.

Prada Debuted Another Of The World's Most Collectible Shirts

Thu Jul 2 , 2020
Photo credit: Prada From Esquire The people want Prada. And, thanks to the label’s reputation for creating thoughtful clothes for the thinking man, the people have wanted Prada for a very long time. So upon the release of another Timecapsule drop – a highly limited collection that debuts a new […] 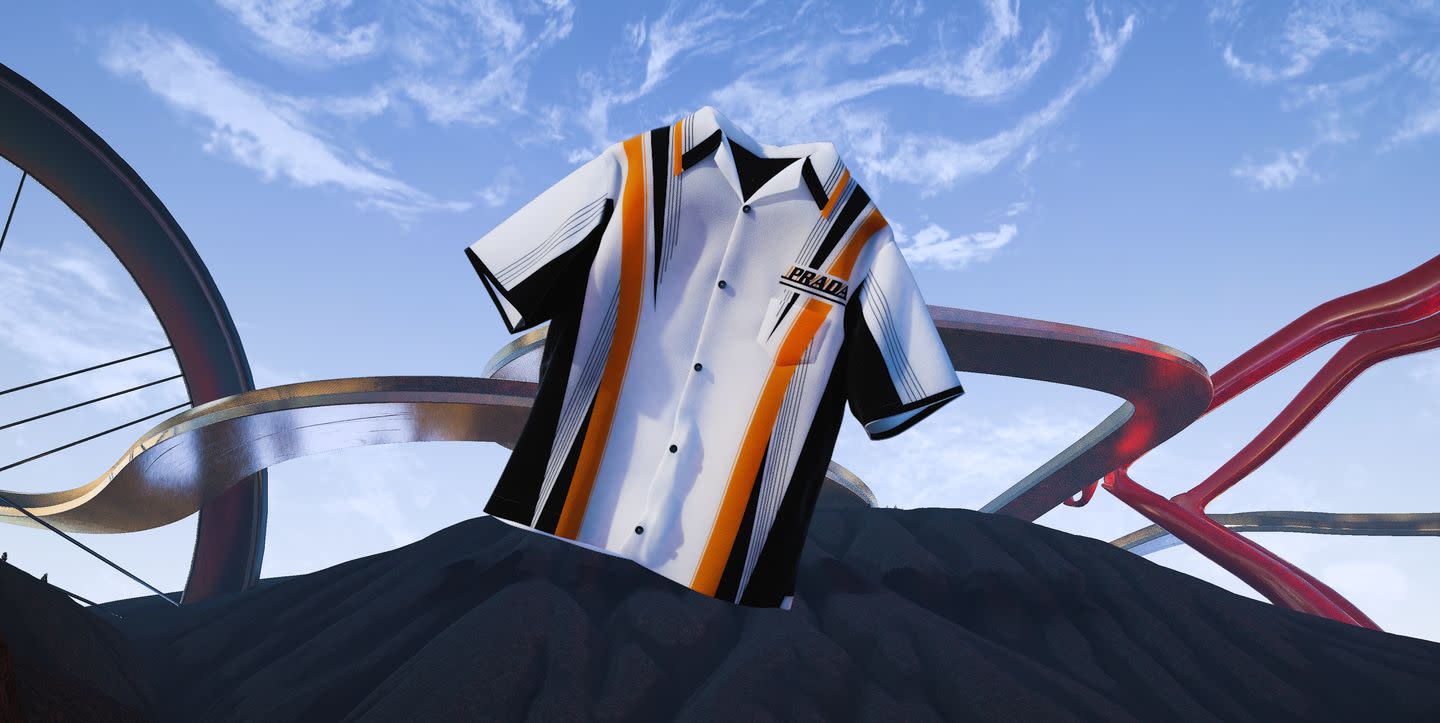