WASHINGTON (AP) — Former Vice President Joe Biden’s White House victory was powered by a broad and racially diverse coalition of voters driven to the polls by fierce opposition to President Donald Trump and anxiety over a surging, deadly pandemic.

Both nationwide and in key battleground states across the Midwest and Sun Belt, the Democrat dominated with voters worried about the coronavirus and hungry for the federal government to do more to contain its spread, according to AP VoteCast, an expansive survey of more than 110,000 voters nationwide. After four years of political turbulence under Trump, Biden handily won voters looking for a leader who could unify the country, and those pushing for racial justice. More saw him as empathetic and honest, and willing to stand up to extremism, compared with the Republican incumbent.

“It has to do with decency. This country has got integrity and hopefully we can get decency,” said Kay Nicholas, a 73-year-old retired teacher and school principal from Brighton, Michigan, a suburb of Detroit. “I think Joe Biden can do it and bring back kindness.”

The election ultimately emerged as a contest between two conflicting visions of America in a time of crisis. Biden voters saw a nation in chaos and a void in presidential leadership, while Trump’s supporters believed the economy was roaring back to health and that the president was delivering on the dramatic political change he campaign on four years ago.

“We love our president, we love our Constitution, we love everything that he’s promised and followed through on,” said Annastasia Theodoropoulos, a 50-year-old Trump supporter in Milford, Pennsylvania, a borough outside Scranton.

Biden’s coalition included clear majorities of college graduates, women, urban and suburban voters, young people and Black Americans — all groups that have risen up in resistance to the Trump presidency. He made good on his promise to win over moderate voters, including some Republicans who rejected the president.

Trump, meanwhile, held his base of white voters without a college degree, rural voters and religious conservatives. And in some competitive states, like Nevada and Florida, Trump ate away at Biden’s support among Latinos, according to the survey.

The two coalitions reflected a striking racial division. Roughly 40% of Americans identify as racial minorities, but just 14% of Trump supporters do. Biden voters more closely reflected America — 63% of his supporters were white, and 37% were people of color.

“We are a force to be reckoned with,” said Linda Wilson, a Black woman and Biden voter, of the mobilization of Black voters. “Let us pray that this is just the beginning.”

Ultimately, Biden’s coalition was large enough for the former vice president to seal a victory, although not the sort of overwhelming wave that Democrats hoped would secure a commanding majority in the Senate. Biden’s win was locked in Saturday when a narrow victory in Pennsylvania handed him an Electoral College majority after he had cemented leads in battlegrounds Wisconsin and Michigan on Wednesday.

Biden flipped the industrial states by securing core Democratic groups. He won 55% of women nationwide. He was backed by 56% of voters under 45 and 90% of Black voters. Biden also led among moderate voters, with 61%. He outpaced Trump in the suburbs, 54% to 44%, and dominated with roughly two-thirds of voters in urban areas.

This was a race about turning out decided supporters — about three-quarters said they knew all along which candidate they backed.

Still, both candidates undertook major efforts to turn out new voters, those who sat out in 2016 or cast ballots for minor-party candidates. AP VoteCast shows those voters ultimately favored Biden — about 60% of them nationwide cast ballots for the Democrat — and made up about 20% of all voters.

Nearly three-quarters of U.S. voters were white and 55% of them supported Trump. A solid 81% of white evangelical Christians backed him. Men leaned toward him over Biden, 52% to 46%. Trump won 60% of voters living in small towns and rural areas.

Eight months into a pandemic that has disproportionately hit Black and Latino Americans, Biden voters were more likely than Trump voters to say they’d been affected personally by the coronavirus pandemic. And Biden’s campaign succeeded in making the election about the controversial president, as well as his leadership on the virus.

For Brittany Walker, a 29-year-old nurse in Virginia Beach, Virginia, the tipping point was when Trump himself contracted the virus. She cast her ballot for Biden.

“To see that Trump was saying that he had it … and was wearing no masks; to me that’s a very big deal,” said Walker, who works on a hospital floor that cares for COVID patients. “How can you show us how to live if you’re not really living it yourself?”

Biden’s message on the virus also appears to have resonated in key battleground states, especially those that saw rising virus cases in the weeks leading up to Election Day. In Wisconsin, which saw an October spike in cases, 45% of voters said the pandemic was the top issue facing the country. They were more likely to say the pandemic is not at all under control, compared with voters nationwide.

Half of all voters said the coronavirus was not under control in the U.S., casting their ballots as a third wave of infections was adding to a death toll that has now surpassed 236,000. About 8 in 10 of these voters supported Biden.

Biden prevailed despite Trump being the preferred candidate to handle the economy, an issue that Trump’s campaign tried to make a top selling point for his reelection. He repeatedly pushed back against public health restrictions that could curb economic growth and made inaccurate claims about the state of economy before the pandemic hit. Trump’s voters believed the president. Roughly three-quarters of his voters said they thought economic conditions were good or excellent, although only about 4 in 10 voters overall agreed.

“We’re living on our 401Ks and it’s just been going up, up, up for the last four years,” said Bill Roan, a retiree from Snellville, Georgia. “I’m just scared with Biden’s tax plan and what’s going to happen with it.”

Throughout the campaign, Trump also sought to use racial tensions to shore up his support, particularly among suburban and older voters. He positioned himself as a defender of the police and portrayed the protesters calling for racial justice and police reform as radicals.

While the appeal showed some signs of resonating in small towns, it did little to sway the suburbs. When asked who could better address policing and justice issues, suburban voters — an increasingly racially diverse group — preferred Biden to Trump by a narrow margin.

In Kenosha, the Wisconsin city that saw violence after a police shooting of a Black man, Trump’s rhetoric on policing and race was too divisive for some of his own supporters.

Steelworker Jason Beck voted for Trump four years ago because he “just felt that it was time for something different,” he said. “And it was a big mistake.”

AP VoteCast is a survey of the American electorate conducted by NORC at the University of Chicago for Fox News, NPR, PBS NewsHour, Univision News, USA Today Network, The Wall Street Journal and The Associated Press. The survey of 110,485 voters was conducted for eight days, concluding as polls closed. Interviews were conducted in English and Spanish. The survey combines a random sample of registered voters drawn from state voter files; self-identified registered voters using NORC’s probability based AmeriSpeak panel, which is designed to be representative of the U.S. population; and self-identified registered voters selected from nonprobability online panels. The margin of sampling error for voters is estimated to be plus or minus 0.4 percentage points. Find more details about AP VoteCast’s methodology at https://ap.org/votecast.

For AP’s complete coverage of the U.S. presidential elections: https://apnews.com/hub/election-2020

Copyright 2020 The Associated Press. All rights reserved. This material may not be published, broadcast, rewritten or redistributed.

Sun Nov 8 , 2020
For over 50 years, they were the George W. Page Homes, and the name was often shortened to “Page” and jammed together with its neighbor, the Mayor Donnelly Homes, and called the Donnelly-Page homes. Now, 77 brand new affordable housing townhomes at the site have their own identity, Turner Pointe, […] 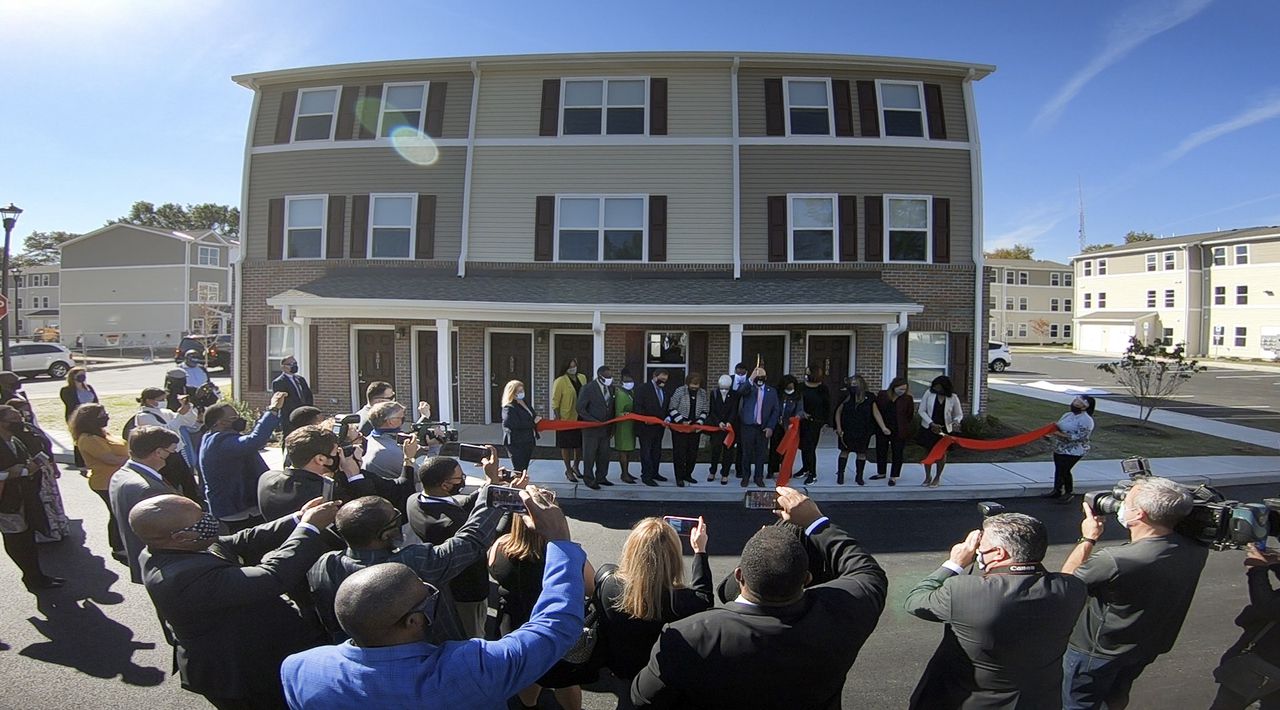