The US just posted a record GDP growth rate, but we’re still not back to our pre-pandemic numbers. The rest of the recovery, experts warn, could be slow going.

Here’s what you need to know to Get Up to Speed and On with Your Day.

(You can also get “5 Things You Need to Know Today” delivered to your inbox daily. Sign up here.)

US coronavirus cases hit a daily record high yesterday, with 88,521 new diagnoses and 971 deaths. With the way things are going, the Institute for Health Metrics and Evaluation at the University of Washington School of Medicine says the daily death rate could triple by January. If states don’t respond with more safety measures, and people don’t abide by them, the IHME says more than 500,000 Americans could die of the virus by that time. Other countries like Germany and Russia are also experiencing record high case numbers, and Europe has once again become the “epicenter” of the virus, according to the World Health Organization. Worldwide, coronavirus cases just surpassed 45 million.

President Trump and Democratic challenger Joe Biden are crossing paths in the final days of the presidential election. They both campaigned in Florida yesterday, with Biden holding a drive-in event in the reliable Democratic enclave of Broward County, and Trump holding a rally in Tampa. Their paths will overlap again today as they both campaign in Wisconsin and Minnesota. Those are important states for Biden to cover, since Hillary Clinton was criticized for neglecting blue collar voters in the same region in the final days of her 2016 campaign. Meanwhile, a federal appeals court has ruled that mailed-in ballots in Minnesota must be received by elections officials no later than Election Day and suggested voters consider other options for casting their ballots if they think they’re too late.

Philadelphia’s City Council has passed a bill banning police use of tear gas, rubber bullets and pepper spray during protests or other First Amendment protected activities. Though the legislation was a response to protests over the summer following the killing of George Floyd in Minneapolis, it comes as new protests roil in the city following the police shooting death of Walter Wallace Jr. Wallace’s family believes the city failed them, a family attorney said, but they are not calling for the police officers who fatally shot him to be charged with murder because they believe the officers were improperly trained and equipped for their jobs. In response to the ongoing protests in Philadelphia, Walmart has announced they are removing firearms and ammunition off some sales floors as a precaution.

France is reeling from a second brutal knife attack as it contends with what President Emmanuel Macron called “Islamist and terrorist madness.” Three people were stabbed to death at a church in the French city of Nice yesterday, and authorities say it was the work of an Islamist terrorist. The suspect, a Tunisian national, was shot at the scene but survived, and has been taken into custody. The attack comes on the heels of the grisly murder of a French history teacher on October 16. The murder of Samuel Paty, who was teaching a lesson using cartoons published in the satirical magazine Charlie Hebdo depicting the Prophet Mohammed, ignited nationwide controversy over free speech, freedom of religion and Islamic extremism.

At least 140 migrants have drowned off the coast of Senegal in the deadliest recorded shipwreck this year. The vessel was carrying about 200 people on their way from the Senegalese town of Mbour to Spain’s Canary Islands. That’s a common route for migrant voyages. In fact, there have been about 11,000 migrant boat departures from West Africa to the Canary Islands this year alone, a four-fold increase over recent years, according to estimates from the UN International Organization for Migration. The IOM estimates 14 boats carrying 663 migrants attempted to make this journey in September alone, and more than a quarter of them were shipwrecked or had an incident.

Starbucks’ sales have fallen, but the company expects them to grow again next year

As long as there is work to be done, we’re going to need coffee.

Netflix is raising prices for its standard and premium plans

Your couch routine just got a bit more expensive

A match made in talented, beautiful people heaven.

That sound you hear is people furiously updating their Christmas lists.

Yet somehow we still lose the lids.

“New Zealand has become a more compassionate and humane society. Thousands of New Zealanders who might have suffered excruciating deaths will have choice, dignity, control, and autonomy over their own bodies, protected by the rule of law.”

New Zealand’s ACT political party, whose leader David Seymour sponsored the controversial End of Life Choice Act. The country’s citizens just voted in favor of legalizing euthanasia for people with a terminal illness, clearing the way for the proposition to become law in 2021.

We leave you with a classic. (Click here to view.)

Fri Oct 30 , 2020
WASHINGTON — The Trump administration Thursday finalized a requirement for insurers to tell consumers up front the actual prices for common tests and procedures. Insurance plans will also be required to make their in-network negotiated rates with doctors and allowable out-of-network rates available to the public, according to the multiagency […] 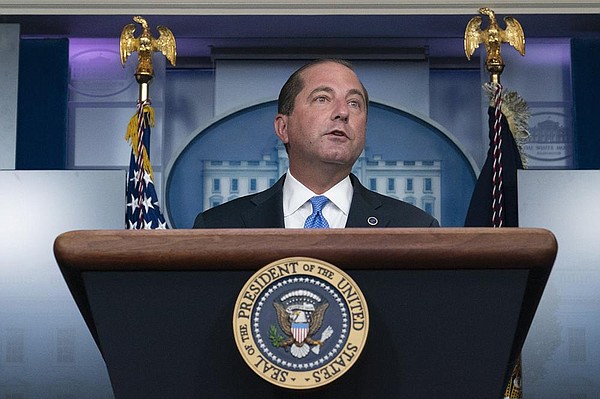